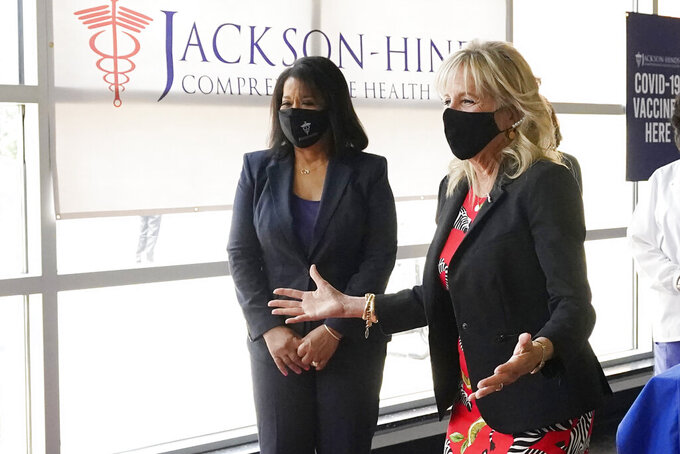 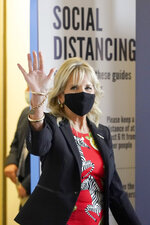 JACKSON, Miss. (AP) — First lady Jill Biden visited one of the states least vaccinated against COVID-19 on Tuesday, encouraging residents of Mississippi to get their shots and telling them, "The White House, our administration — we care about you.”

“I’m here today to ask all of the people who can hear my voice, who can see my face, to get their shot," Biden said after visiting a clinic at Jackson State University, one of the largest historically Black universities in the country. Biden later encouraged people who were getting vaccinated in Nashville, Tennessee, with the help of country singer Brad Paisley later Tuesday evening.

Mississippi and Tennessee have consistently ranked among the U.S. states with the fewest number of residents vaccinated against COVID-19, along with Alabama. Approximately 30% of Mississippi’s total population is fully vaccinated, according to the state Department of Health.

The first lady said she wanted to visit states like Mississippi and Tennessee because the current vaccination rates are "just not enough."

Mississippi's U.S. Rep. Bennie Thompson, who was present at Tuesday's event in the state capital, said it's important for Biden to be in Mississippi "given the demographics of the population that is most vulnerable.”

Mississippi is among the states in the U.S. with the highest number of chronic health conditions that can make people more vulnerable to COVID-19, such as diabetes and heart disease.

President Joe Biden had set a vaccination goal of delivering at least one shot to 70% of adult Americans by July Fourth, a target the White House administration acknowledged Tuesday he will likely fall short of.

As of Tuesday, 54% of Americans had been vaccinated with at least one dose of the COVID-19 vaccine. Increased participation in states like Mississippi and Tennessee will be essential to boosting the nation’s overall vaccine rate.

Inside the Ole Smoky Distillery and Yee-Haw Brewing Co. in Nashville, bartenders were serving beers and shots over loud country music as people got vaccinated outside in a pop-up clinic. Biden said that only three in 10 Tennesseans had been vaccinated, which prompted boos from the crowd.

“The vaccines are the only way to get back to the open mics and the music festivals and the concerts that make this town so very special,” Biden said.

Paisley noted that the COVID-19 virus had hit the country music artist community very hard and that icons like Mississippi-native Charley Pride and John Prine had died before a vaccine could be created.

Many Mississippi residents remain hesitant, however.

Angel Devine of Jackson said Tuesday that she has chosen not to get the COVID-19 vaccine so far because she doesn’t like needles, and she’s worried that the shot won’t be effective against variants.

She said she is now considering it, not because of the first lady's visit, but because she has been urged to by her 18-year-old daughter, who is heading off to the University of Southern Mississippi to study nursing.

“She wants to get it, and she wants me to get it with her," she said. "I’m still concerned, but it does want me to take it a little more. We’ll have to wait and see.”

Dobbs has said family pressure is one of the most powerful motivating factors to get people to take the vaccine.

Glenda McHenry, 78, of Pearl, a city outside Jackson, said she has family members who are still waiting to get the shot, but she got hers months ago. She said she wanted to spend time with her three grandchildren without being concerned about them passing the virus to her, or vice versa.

“I did have some worries at first — just really not knowing what it was going to do to you,” she said, of the vaccine. “But I just felt it was the thing to do. It was important to be able to spend time with those kids.”