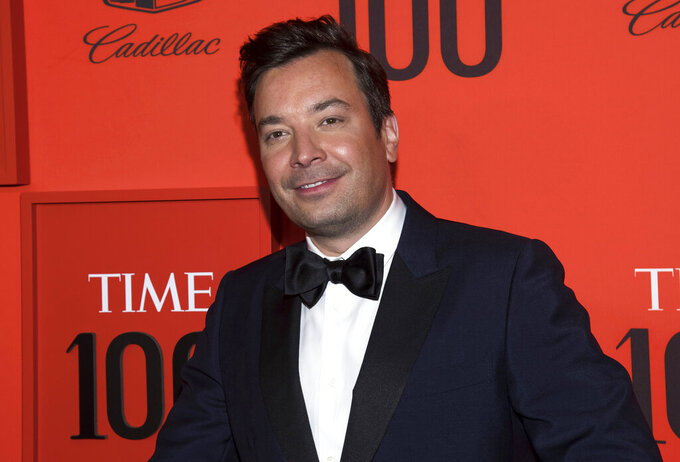 FILE - In this April 23, 2019 file photo, Jimmy Fallon attends the Time 100 Gala in New York. Fallon and the "Tonight Show Starring Jimmy Fallon" show have returned to their New York City studio for the first time since the coronavirus epidemic shut down much of television. He recorded Monday's show in the studio along the show's band, the Roots, but without an audience. Guests like New York Gov. Andrew Cuomo were interviewed remotely. (Photo by Charles Sykes/Invision/AP, File)

NEW YORK (AP) — The studio is largely empty, but Jimmy Fallon is out of his home and back to the “Tonight” show stage.

The NBC late-night host returned to NBC's Rockefeller Center headquarters Monday, saying he hoped he could provide his audience with a little more “normal” during the coronavirus pandemic.

“I'm here to show you that there is a light at the end of the tunnel if we keep each other safe,” Fallon said.

Fallon, along with other late-night hosts, have been working remotely the past few months of months. The coronavirus pandemic shutdown TV and film production in March for safety reasons. New York has slowly been reopening as other parts of the country are now feeling the full effects of the epidemic.

He began his show with a filmed piece showing him “walking” to work, pulling down his mask so a Rockefeller Center security guard knew he was indeed an employee.

His backup band, the Roots, were in place. Studio crew members wore face shields and masks. Everyone there had tested negative for COVID-19, he said. There was no audience.

Fallon was dressed more informally, with a sweater instead of a suit.

“Normalcy, any type of normalcy, feels great,” he said. “So hopefully we can put a smile on your face an hour every night and let you sit back and relax while we try to bring you a little bit of normal.”

Guests, including New York Gov. Andrew Cuomo and Charlize Theron, weren't in the studio as the celebrity interviews continued remotely.

Representatives for Stephen Colbert's “Late Show” and Comedy Central's “The Daily Show” with Trevor Noah both said plans were in the works to return to studios but put no timetable on it.