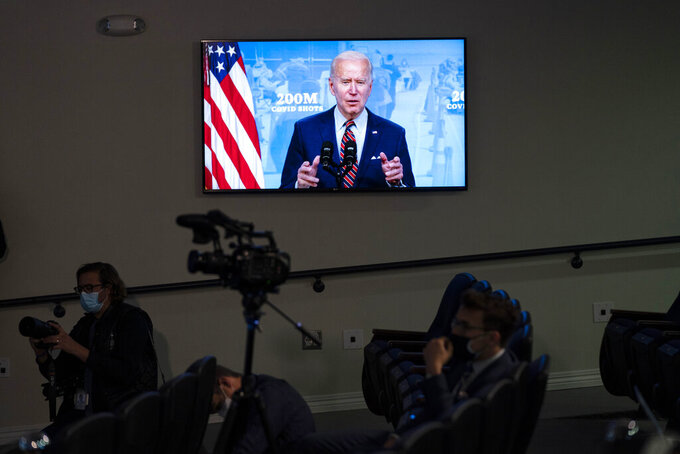 President Joe Biden speaks about COVID-19 vaccinations at the White House, Wednesday, April 21, 2021, in Washington. Even before the coronavirus surfaced, training guides by the Centers for Disease Control and Prevention noted the difficulty of communicating in a public health crisis, when fear and uncertainty are running high. Yet how leaders communicate can be key to winning public cooperation. Or undermining it. (AP Photo/Evan Vucci)

NEW YORK (AP) — Confronted with rare cases of blood clots potentially linked to Johnson & Johnson’s COVID-19 vaccine, U.S. health officials faced a delicate task: how to suspend distribution of the shots without setting off alarm about their safety.

It was the just the latest challenge in crisis messaging for officials since the start of the pandemic more than a year ago. The behavior of the new virus, the benefits of masks and the need for school and business closings have all been marked by public confusion, changing guidance and squabbling.

With the J&J shots, the recommended “pause” announced last week was a precautionary measure as government advisers investigated the unusual clots and alerted doctors about how to treat them. But the news was bound to inflame fears.

“It’s going to be painful either way. It’s less painful if you address it early on,” said Dr. Wilbur Chen, a member of the government’s advisory committee on vaccines, which is expected to meet on Friday and could make a recommendation soon after on whether and how to resume use of the J&J vaccine.

Whether the pause seriously undermines public confidence in the J&J shot — or the other vaccines — remains to be seen.

Even before the coronavirus surfaced, training guides by the Centers for Disease Control and Prevention noted the difficulty of communicating in a public health crisis, when fear and uncertainty are running high. Yet how leaders communicate can be key to winning public cooperation. Or undermining it.

By promptly notifying the public that they were investigating clots, officials were following a fundamental rule in the crisis playbook: transparency, even when the answers aren’t yet clear.

“We want people to know what we know,” U.S. Surgeon General Dr. Vivek Murthy explained at a media briefing soon after the announcement on the J&J vaccine.

Trying to appear confident when uncertain -- which leaders are often taught to do -- can backfire in a public health crisis, a CDC guide notes. In addition to building trust, being up front about the unknowns leaves room for officials to change their guidance as new information emerges.

“COVID is a new disease and we learn new things, and that is hard,” said Alice Payne Merritt, an expert in public health communications at Johns Hopkins University. “What we knew in April 2020 is different than what we know in April 2021.”

Quickly stating what isn’t yet known and why has another benefit: blunting the potential for misinformation to spread. Otherwise, people may start filling in the blanks themselves, the CDC guide says.

Still, leaders might be reluctant to acknowledge uncertainty, especially since people crave clear answers and reassurance in stressful and unfamiliar situations.

Another problem: Anxiety can make it difficult for people to process new information, or as Payne Merritt put it, “Fear can override rational thinking. That’s just human nature.”

With the J&J shots, for example, helping people understand the magnitude of any risk has been a challenge. So far, officials said there have been six cases of the unusual blood clots out of about 7 million J&J shots given in the U.S.

People regularly take bigger risks just getting into a car.

Dr. Anthony Fauci, the top U.S. infectious disease expert, noted the difficulty of putting the odds of severe side effects in proper perspective for the public.

“They hear about a risk, and they don’t know what it is relative to other things that they do,” he said in an NBC interview.

Confusion and anger around public messaging haven’t been limited to the J&J shots.

In September, President Donald Trump came under fire when it was revealed he sought to “ play it down ” to avoid a panic about the virus. Last April, U.S. officials sparked criticism when they advised people to wear face coverings, after earlier saying masks weren't needed and should be reserved for health workers.

And for months, officials have been trying to ease worries about the COVID-19 vaccines overall, in part by enlisting local leaders.

In the early days of the rollout, rare cases of severe allergic reactions fueled worries about the vaccines. Chen, the government adviser, said officials built trust by addressing the problem head-on. Now, he said, people have moved past it.

“Can you imagine if we had basically tried to cover it up, tried to minimize it?” said Chen, a vaccine expert at the University of Maryland, adding that U.S. vaccination rates probably wouldn’t be where they are today.

As of this week, more than half of American adults have received at least one dose of a COVID-19 vaccine.