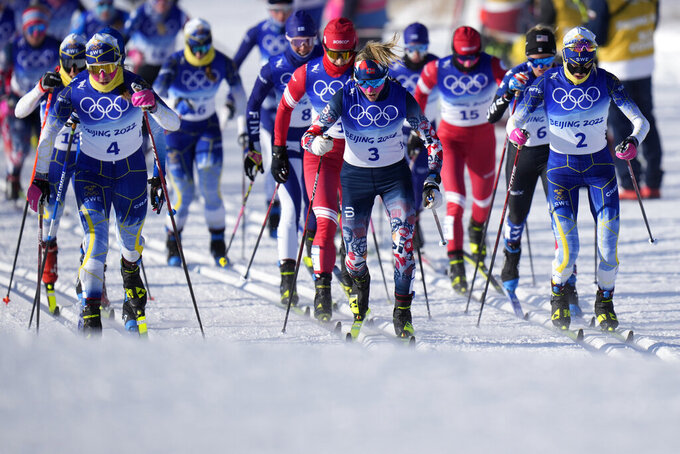 The Norwegian fought wind and frigid temperatures to ski away from a chase group of four, winning in 44 minutes, 13.7 seconds.

“I’ve trained thousands of hours for this and been away from home a lot over the years. So it’s beautiful to reach this goal,” Johaug said. “I’ve never had an Olympic gold medal, it’s my first one.”

The skiathlon is a mass-start race that began with 7.5 kilometers of classic skiing. After two laps around the 3.75-kilometer course, racers came through the stadium and quickly switched to skate skis before heading out for another two laps.

Johaug lead through the first skate lap, opened a gap on the second lap and crossed the line with a comfortable lead.

Russian athlete Natalia Nepryaeva, the current overall World Cup leader, pulled away from the group on the last climb to take silver, 30.2 seconds behind Johaug. Nepryaeva is competing in her second Olympics. She won bronze in a relay race at the Pyeongchang Games.

“I’m pleased to get silver," Nepryaeva said. "It’s my first time to produce a performance like this at the Olympic Games, and it gives me a lot of confidence for the races later this week. I feel very powerful now.”

Teresa Stadlober of Austria followed just behind for the bronze medal. She's competing in her third Winter Games and won her first medal, having just missed out in Pyeongchang.

“Four years ago, I was tied for a medal and then I made a mistake and I didn’t get it. And I was working four years, and always had the dream to reach a medal,” Stadlober said. "And now I have it and it’s unbelievable for me.”

Kerttu Niskanen of Finland finished fourth and Frida Karlsson of Sweden was fifth, just ahead of Jessie Diggins of the United States in sixth.

Heidi Weng of Norway missed the race. She tested positive for COVID-19 and spent time in isolation. It was unclear whether she would attend the Winter Games.

The 33-year-old Johaug has raced at the top international level since 2007. She won Olympic gold in the 4x5-kilometer relay at the 2010 Vancouver Games and has won 10 world championship titles but had never before won an individual Olympic gold medal.

This win was a bit of a redemption after missing the 2018 Pyeongchang Olympics after testing positive for a banned substance, which resulted in an 18-month suspension. Johaug blamed a team doctor who mistakenly gave her lip balm that contained the substance.