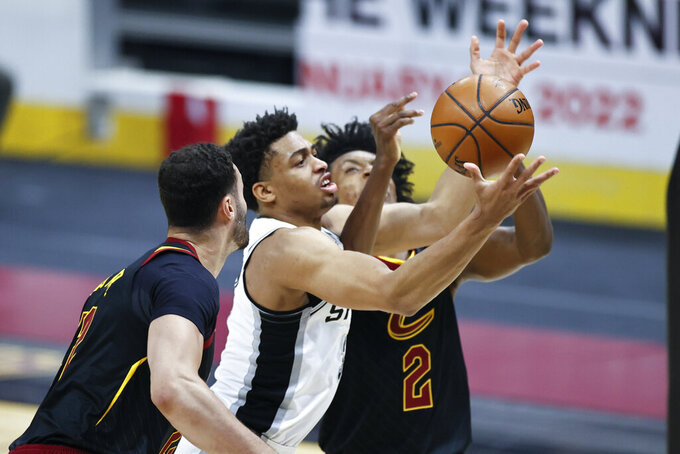 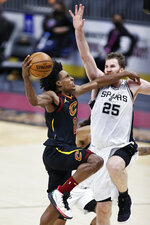 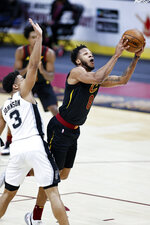 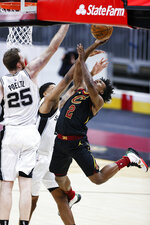 CLEVELAND (AP) — Keldon Johnson scored 23 points and grabbed a career-high 21 rebounds, and Dejounte Murray had 22 points as the San Antonio Spurs held on for a 116-110, wire-to-wire victory over the Cleveland Cavaliers on Friday night.

“It’s definitely an honor to be in the company of one of the greats, but I have to keep going, keep pushing, can’t be satisfied,” said Johnson, who is listed at 6-foot-6. “You’ve just got to fight, man. You’ve got to want it every play, got to go get it. I just try to be myself — Keldon Johnson — out there.”

Johnson’s previous NBA best was 14 rebounds against Dallas on Jan. 22 and he had 17 total boards in his last five games. The Kentucky product said the 21 rebounds were his most at any level of basketball.

“Keldon was just a moose,” San Antonio coach Gregg Popovich said. “He never stops. He’s got aggressiveness 100% of the time he’s on the court.”

DeMar DeRozan had 20 points and seven assists in his return to the Spurs after missing four games for the funeral of his father Frank. San Antonio, which led by 22 in the third quarter, won its third straight to move a season-high six games over .500.

Darius Garland had a career-high 29 points and eight assists for the Cavaliers, who have lost five of their last six. Collin Sexton also scored 29 points and Jarrett Allen had 15 points and 11 rebounds.

Cleveland pulled within 114-110 on a 3-pointer by two-way player Brodric Thomas with 9 seconds left, but Murray made two free throws to lock up the victory.

“We have to change our intensity and come out with more pressure early in games,” Garland said.

Back-to-back 3-pointers by Patty Mills extended San Antonio’s advantage to 75-53 late in the third. DeRozan had eight points during the 21-11 spurt to open the second half.

Johnson had 15 points and 11 rebounds in the first half, helping San Antonio take a 54-42 lead. Garland scored 16 points for the Cavaliers, who trailed by 15 in the second.

“Credit to the Spurs and the way they played for 48 minutes,” Cleveland coach J.B. Bickerstaff said. “We got off to another slow start and we can’t have that.”

Popovich fully supported DeRozan spending the past week to grieve with his family following the death of his dad. Frank DeRozan passed away in Los Angeles on Feb. 19. “Circumstances are always different, but he did what was necessary for his family and I applaud him for that,” Popovich said. “Your family loves you. Basketball doesn’t.”

White wasn’t surprised that DeRozan didn’t miss a beat in his return, saying, “He’s a hooper. That’s what he does.”

Cavaliers: G Matthew Dellavedova (appendectomy) practiced Thursday and is close to making his season debut, according to Bickerstaff. Fan favorite Dellavedova suffered a concussion in the preseason before his appendix burst. ... C JaVale McGee (illness) did not dress. ... F Kevin Love (right calf soreness) and F Taurean Prince (left shoulder sprain) remain out. Love has only played four games and 58 minutes this season.