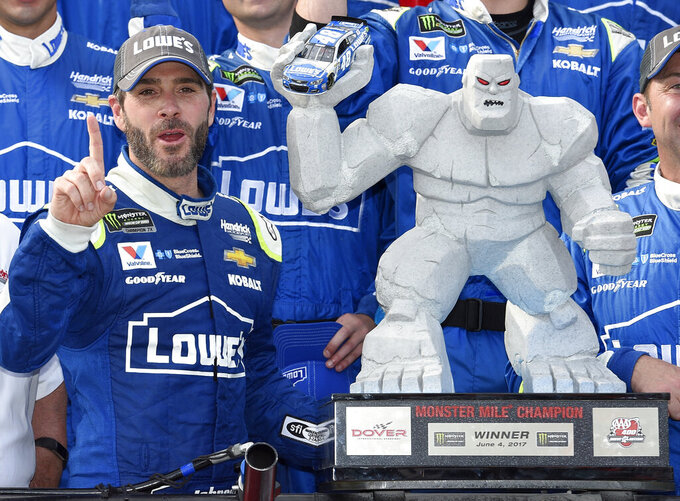 FILE - In this June 4, 2017, file photo, Jimmie Johnson, left, poses with the trophy in Victory Lane after he won a NASCAR Cup series auto race at Dover International Speedway in Dover, Del. Jimmie Johnson has a track-record 11 wins at Dover International Speedway. He’ll have to win No. 12 to guarantee a playoff spot and he has two shots this weekend when the NASCAR Cup series races on Saturday and Sunday. (AP Photo/Nick Wass, File)

Jimmie Johnson is at the win-or-else stage of his playoff push as he hits his favorite track.

Johnson has a record 11 victories at Dover International Speedway, a staggering total that started in 2002 and stretched to June 2017, a win that has stood for three-plus years as his last in NASCAR.

With Dover moving one of its two scheduled NASCAR race weekends to Nashville Superspeedway next season, Johnson’s mark seems unbreakable. But his farewell season could end in tatters if he’s racing out the string with nothing at stake and no fans roaring from the stands.

“I never wanted to have a winless drought or have a winless season,” Johnson said Friday. “But I’ve worked through so many of those emotions over the last couple of years and also understand that there are factors that I can’t control that have affected my performance.”

Win at least one of the two Cup races this weekend at the Delaware track, and he’s in the postseason.

Dover, where Johnson has led 3,110 laps, is no sure shot these days for the No. 48 team -- Johnson has lost his magic touch on the Monster Mile with two finishes of 14th or worse in the last three races.

Without a win, his playoff chances hang by a thread. Johnson is 25 points outside the playoff cutline with two Dover races and next week’s regular-season finale at Daytona International Speedway left to end his final full NASCAR season in the championship hunt.

Yes, he’s far removed from his dominant days in the Hendrick Motorsports Chevrolet, which has nudged him into the outside of the playoff field. Johnson, a 22-1 longshot, might be in a more snug position had it not been for two disastrous results:

His No. 48 failed inspection in May at Charlotte, negating his runner-up finish. That cost him 45 points, a total which would have placed him ahead of Matt DiBenedetto (596) and Hendrick teammate William Byron (577) and into a playoff spot. Johnson instead is stuck at 552 points and needs some help to move past Dale Earnhardt and Richard Petty with an eighth crown.

And then there’s the Brickyard.

Johnson, who wants to run about 15 races across several series next year, has no idea if he truly had COVID-19 after flunking a test that cost him a race in July. He never suffered any symptoms and had two negative tests only days later, quickly putting him back in the car.

According to NASCAR rules, Johnson failed to receive the points his relief driver earned at Indianapolis and the 0 on the scorecard is another reason why he’s on the outside of the playoff cutline. Justin Allgaier finished 37th in Johnson’s place and wouldn’t have necessarily added a significant bump to the total.

But the question has been raised, should a playoff driver who tests positive for COVID-19 and misses a race receive the relief driver points to keep his championship drive alive?

The 44-year-old Johnson says no way.

“It’s been a big concern of mine since the beginning and something I’ve had talks with internally at NASCAR,” Johnson said. “The precedent has been set and you’ve got to see it through. I haven’t had that luxury and, although it might just be a few points I would have received, I didn’t get the points for the Brickyard and wasn’t under the impression that was ever an option. I think the bed has been made and they need to see it through the rest of the year.”

Austin Dillon has been cleared to return to the No. 3 Chevrolet after he tested positive for COVID-19 and sat out last week’s race at Daytona. Kaz Grala drove the Chevy to a seventh-place finish.

Corey LaJoie said Friday he will not return to the Go Fas Racing No. 32 team next season. LaJoie has one top 10 this season and is 29th in the standings.

“My partners and I are in discussions with several other opportunities to continue improving competitively in the Cup Series,” LaJoie tweeted. “Go Fas has been a significant part of my growth. Together, over the last two years of competing, we’ve achieved career-best finishes for both myself and the team. I’ve enjoyed working with all the guys and made lifelong friendships.”

Delaware officials did not approve the track’s request to host a limited number of fans in the interest of public safety and health concerns.

“We submitted a comprehensive plan to state officials outlining our planned procedures and protocols for keeping our fans safe throughout our August race weekend,” said Mike Tatoian, the track president. “Unfortunately, due to the increase in COVID-19 cases in recent weeks, the decision was made to not allow fans. We understand it, and while we are disappointed, we also realize that we need to err on the side of caution and yield to the opinions of public health experts to help reduce the further spread of COVID-19.”

LaJoie has run a “Trump 2020” paint scheme this year and will continue to do so as part of a sponsorship deal between Go Fas Racing and the political action committee, Patriots of America. President Donald Trump on Wednesday urged people to boycott tires from Goodyear Tire and Rubber Co., tweeting that the Ohio-based company had “announced a BAN ON MAGA HATS.” Goodyear has been NASCAR's official tire supplier since 1997. LaJoie and the Go Fas Racing team are scheduled to race the “Trump 2020” scheme next week in Daytona.