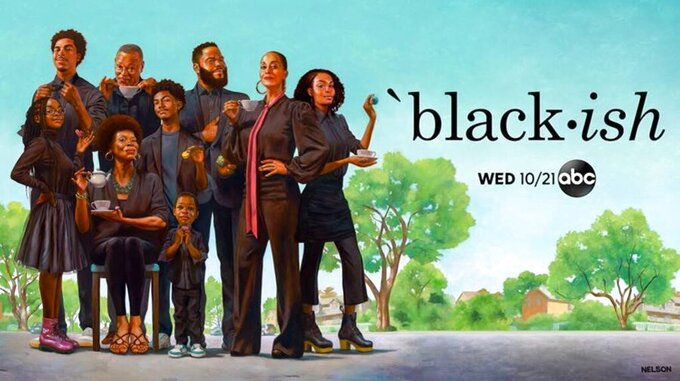 This image released by ABC shows artwork by Kadir Nelson, showing the cast of "black-ish." When ABC decided the Johnsons of “black-ish” were due a portrait, it sought artist Kadir Nelson, a chronicler of contemporary African American experience and a fan of the sitcom. The result is a captivatingly sly oil-on-canvas work that depicts cast members including Anthony Anderson and Tracee Ellis Ross in character as part of a riff on the “sipping tea” meme. Nelson said the approach fits a tumultuous year of racial reckoning and a devastating pandemic.  ABC's “black-ish” returns for its seventh season on Oct. 21, with the family portrait used for promoting the series. (Kadir Nelson/AB via AP) 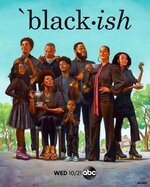 LOS ANGELES (AP) — When ABC decided the Johnsons of “black-ish” were due a portrait, it sought an artist who understood the family's perspective.

The task went to painter and illustrator Kadir Nelson, a chronicler of contemporary African American experience and an admirer of the sitcom. The result is a captivatingly sly, 70x70-inch oil-on-canvas work that depicts series stars including Anthony Anderson and Tracee Ellis Ross in character and part of a riff on the “sipping tea” meme.

“I was thinking about how the fictional Johnson family would respond,” he said, when he hit on the meme. “You’re kind of sitting back and observing with this knowing look: ‘I know what’s going on. I may say something sassy, but I’m just going to be over here minding my business, sipping my tea.' And that’s what the Johnson family is doing.”

The prolific Nelson, an award-winning book illustrator and author, has paintings in institutions including the Smithsonian and the National Museum of African American History and Culture. Among his New Yorker magazine cover images is a powerful tribute to George Floyd and other Black victims of violence.

Art is essential to help navigate such a “rollercoaster” period, he said.

“It's a way of documenting our times, expressing our fears, our angst, our dreams, our thoughts and emotions. And it gives us a way to look forward,” he said, citing visual images delivered through smartphones, computers and TV as especially influential.

"There are very important or visceral images that grab our attention and provoke thought and may inspire us to take action or do something that brings forth the best part of ourselves, hopefully.”

With his painting for “black-ish,” Nelson sees himself following the path of the late artist Ernie Barnes, whom he described as a mentor. “The Sugar Shack,” Barnes' joyous painting of a music club, was used in the 1970s sitcom “Good Times” and as cover art for Marvin Gaye's 1976 album “I Want You.” Nelson's art has appeared on album covers including Drake's “Nothing Was the Same.”

Nelson's painting will be the basis for “black-ish” print, digital and other promotion in its seventh season, based on a high-resolution image of the work that he has retained. The artist anticipates that the original will end up with a collector.

In 2017, he created another work for “black-ish,” this one used in the “Please, Baby, Please” episode that was a lament on social and environmental ills and took sharp jabs at at President Donald Trump. Shelved by ABC, it saw the light of day when Disney corporate sibling Hulu released it earlier this year.

ABC said Nelson was “the first artist on the list” for the family portrait, citing his contribution to “Please, Baby, Please” and his recent works for The New Yorker and Rolling Stone. The latter used Nelson's “American Uprising,” depicting a woman and child at the forefront of a protest march, to illustrate a Black Lives Matter cover story.

In developing the concept for the “black-ish” painting, the network and the show's producers gave him “pretty much free reign,” Nelson said, and a sketch sold them on the idea of the Johnsons coping together despite the pandemic quarantine.

Like “The Cosby Show” before it, Nelson said, “black-ish” depicts a successful family with humor and warmth, headed by professionals (dad is an advertising executive, mom a medical doctor) who are attentive parents.

While the Johnsons face issues common to all Americans, providing a Black family's perspective allows the series to hit “very key points that we all need to think about,” he said.

Lynn Elber can be reached at lelber@ap.org and on Twitter at http://twitter.com/lynnelber.