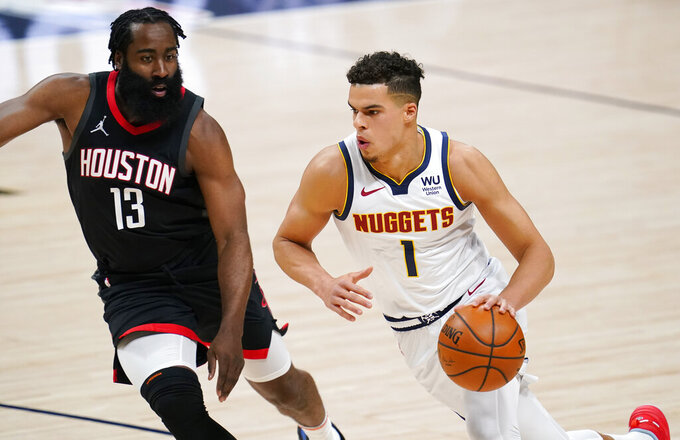 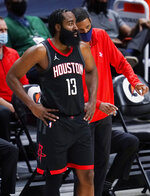 DENVER (AP) — Nikola Jokic had 19 points, 18 assists and 12 rebounds for the 42nd triple-double of his career, and the Denver Nuggets beat the short-handed Houston Rockets 124-111 on Monday night for their first win of the season.

Jamal Murray added 21 points before leaving with 4:05 remaining in the third quarter after a collision in traffic sent him sprawling to the floor. He held his hand to his head for a couple of minutes but got up and walked under his own power to the locker room for further examination. He was back on the bench midway through the fourth but did not re-enter the game.

The Rockets have started the season without several key components, including John Wall, DeMarcus Cousins, Eric Gordon and Mason Jones, who remain away from the team due to COVID-19 health and safety protocols. Houston dressed nine players against the Nuggets following a two-point overtime loss at Portland in the season opener Saturday.

"This is a growing, learning experience for all of us and we have to get better, on the defensive end especially," Rockets coach Stephen Silas said. "When you have nine guys, and you are kind of doing things on the fly because you don’t have practice time, it can get ugly against a good team and that’s what happened tonight.”

Harden put on a show in the second quarter, scoring 21 points and connecting on three 3-pointers, but the Rockets still trailed 70-60 at halftime. Jokic and Murray combined for 36 points in the first half to help spark the Nuggets’ offense, which had struggled during an 0-2 start.

Houston pulled to 87-79 on a dunk by Jae’Sean Tate with 5:33 left in the third but the Nuggets closed the period with a 19-4 run and maintained a double-digit lead the rest of the way. Paul Millsap touched off the flurry with a 3-pointer off a feed from Jokic, whose 18 assists represented a career best.

“He’s a great player, a great talent,” said Millsap, who finished with 19 points. “You always know when you’re open, he’s going to hit you.”

Jokic said he learned to read the floor for passing lanes early on.

“I just play like that, trying to find the open guy,” he explained. “My coaches gave me the freedom to do that.”

Rockets: On a pregame Zoom call, Silas said he was hopeful most if not all the players either quarantining or self-isolating would be able to emerge from the health protocols and rejoin the team by mid-week. “Wednesday’s practice is an important practice, getting these guys back in and getting the group on the same page,” Silas said.

Nuggets: F JaMychal Green, who left the Los Angeles Clippers to join the Nuggets in free agency during the offseason, remains sidelined by a left calf strain. He missed a third straight game but is getting closer to making his Denver debut, resuming practice in a limited fashion.

Rockets: Host the Sacramento Kings on Thursday night in their first home game of the season. Houston’s scheduled home opener last week against Oklahoma City was postponed after COVID-19 quarantine protocols depleted the Rockets’ roster below the eight players required by the NBA to play a game.