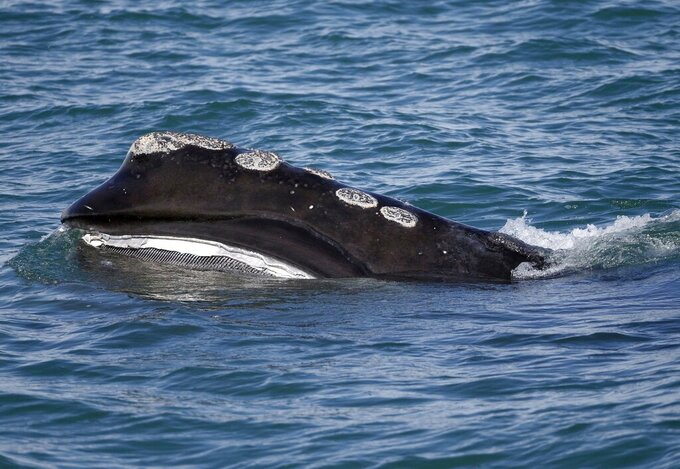 FILE - In this March 28, 2018 file photo, a North Atlantic right whale feeds on the surface of Cape Cod bay off the coast of Plymouth, Mass. A judge ruled on Thursday, April 9, 2020, that the federal government had failed to adequately protect endangered whales from lobster fishing activities. Environmental groups had sued the U.S. government with a claim regulators' failure to prevent the North Atlantic right whale from harm was a violation of the Endangered Species Act. (AP Photo/Michael Dwyer, File)

PORTLAND, Maine (AP) — A judge has ruled the federal government failed to adequately protect endangered whales from lobster fishing activities, sending the industry and regulators scrambling to figure out what the future holds for one of America's most lucrative marine industries.

Environmental groups sued the U.S. government claiming regulators' failure to protect the North Atlantic right whale from harm was a violation of the Endangered Species Act. U.S. District Judge James Boasberg ruled Thursday that the National Marine Fisheries Service did just that by understating lobster fishing's ability to kill the whales via entanglement in ropes.

Boasberg's ruling states the service found the “American lobster fishery had the potential to harm the North Atlantic right whale at more than three times the sustainable rate,” but did not take appropriate action about that risk. A remedy will come in the future, the ruling states.

Environmental groups, including the Center for Biological Diversity, which filed the lawsuit, heralded the ruling as a victory in the fight to protect the whales, which number only about 400.

“This decision should send a clear signal that federal officials must take immediate action to protect these amazing animals from suffering more deadly, painful entanglements before it’s too late," said Kristen Monsell oceans legal director at the Center for Biological Diversity.

Boasberg's ruling could mean changes for the management of the lobster industry, which was worth more than $600 million at the docks in 2018 and is based mostly in Maine and Massachusetts. Democratic Maine Gov. Janet Mills said she has instructed the state's marine resources commissioner, Patrick Keliher, to review the decision and respond in the coming days.

“Upon an initial review, this is a deeply disappointing decision,” Mills said.

The lobster industry is already in the midst of numerous challenges, including a weakened seafood market caused by the coronavirus outbreak. The industry is also facing impending new restrictions designed to better protect the right whales, which have declined in population in recent years.

Right whales were one of the whale species most heavily exploited during the whaling era, when they were hunted for oil and meat. They've since become a major focus of the worldwide movement to protect ocean life.