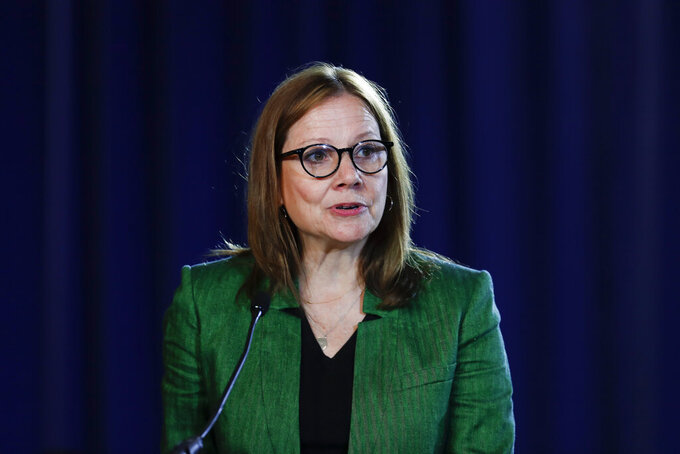 FILE - In this July 16, 2019, file photo, General Motors Chairman and Chief Executive Officer Mary Barra speaks during the opening of GM's contract talks with the United Auto Workers in Detroit. A federal judge took a remarkable step Tuesday, June 23, 2020, by ordering the CEOs of General Motors and Fiat Chrysler to meet and settle a lawsuit over whether one company got a competitive edge over the other when union leaders were showered with cash and other perks. (AP Photo/Paul Sancya, File)

DETROIT (AP) — A federal judge took a remarkable step Tuesday by ordering the CEOs of General Motors and Fiat Chrysler to meet and settle a lawsuit over whether one company got a competitive edge over the other when union leaders were showered with cash and other perks.

GM has accused Fiat Chrysler of racketeering, saying the rival won labor concessions during contract talks because United Auto Workers officials were bribed with money from a job training center.

“What a waste of time and resources, now and for the years to come in this mega litigation, if these automotive leaders and their large teams of lawyers, are required to focus significant time-consuming efforts to pursue this ‘nuclear option’ lawsuit, if it goes forward,” Borman said.

He said he wants an update from Barra and Manley at noon on July 1.

The judge noted that GM and Chrysler were rescued by the federal government with billions of dollars during the Great Recession.

“Today our country needs, and deserves, that these now-healthy great companies pay us back by also focusing on rescuing this country and its citizens from the plagues of COVID-19, racism, and injustice while building the best motor vehicles in the world,” Borman said.

Federal agents have been investigating corruption in the senior ranks of the UAW. The first wave of convictions in 2017 involved key Fiat Chrysler employees who used money from a jointly run training center to reward union officials. Al Iacobelli, who was the automaker's labor chief, was sentenced to 5 1/2 years in prison.

General Holiefield, a UAW vice president who was responsible for negotiating with Fiat Chrysler, paid off a $262,000 mortgage, the government said.

In response to the GM lawsuit, Fiat Chrysler, known as FCA, has denied that it directed any bribes and wants the judge to dismiss the case.

"Our view of GM’s lawsuit has not changed," FCA said Tuesday. "As we have said from the date it was filed, the lawsuit is meritless and it should be withdrawn. We therefore acknowledge Judge Borman’s concerns and look forward to meeting to discuss them and ideally put this matter behind us.”

GM said it has a strong case against FCA.

“We look forward to constructive dialogue with FCA consistent with the court’s order,” the company said.