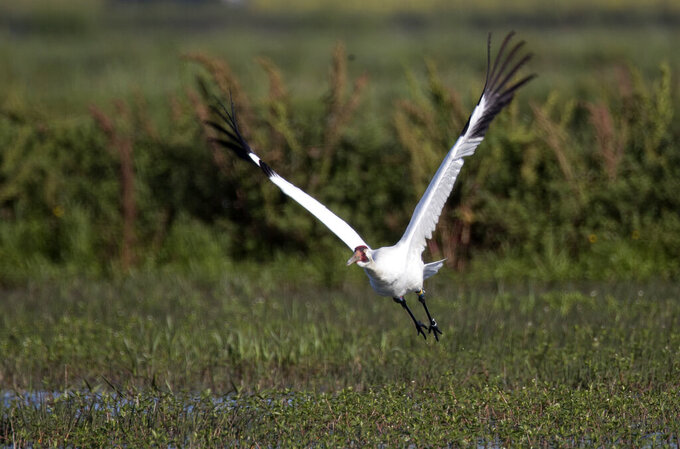 FILE - In this March 23, 2018 file photo, a whooping crane, a critically endangered species, flies away from its nest with eggs, in a crawfish pond in St. Landry Parish, La. The sentence given Thursday, July 30, 2020 to Kaenon Constantin of Rayne is the toughest ever in Louisiana for a crime involving one of the endangered birds, the International Crane Foundation said in a news release. (AP Photo/Gerald Herbert, File)

LAFAYETTE, La. (AP) — A man who admitted that he and a juvenile shot and killed two whooping cranes in 2016 must pay $85,000 and cannot hunt until he completes 360 hours of public service.

The sentence given Thursday to Kaenon Constantin of Rayne is the toughest ever in Louisiana for a crime involving one of the endangered birds, the International Crane Foundation said in a news release.

Whooping cranes are among the world’s rarest birds, and are the largest crane in North America. The 850 or so alive today all descended from 15 that lived in coastal Texas in the 1940s. When released as juveniles, they are mottled brown and white. As adults, they’re about 5 feet (1.5 meters) tall, white with black wingtips and have nearly featherless red caps.

Constantin pleaded guilty Thursday to a misdemeanor violation of the Lacey Act, which makes it illegal to transport wildlife, fish or plants taken in violation of any other state, federal or foreign law.

He was fined $10,000 and ordered to pay $75,000 in restitution to the state Department of Wildlife and Fisheries, U.S. Attorney David Joseph said in a news release Friday.

International Crane Foundation North America Program Director Liz Smith said in a letter to the judge that it costs nearly $94,000 to raise, release and monitor a whooping crane in Louisiana.

Authorities said Constantin and a juvenile shot the two cranes in May 2016 in Acadia Parish. After finding that the one they had retrieved was banded and fitted with a transmitter, they cut off its legs and threw the transmitter into a crawfish pond.

“When initially approached by investigators shortly after the crime, Constantin lied about his involvement, causing the investigation to continue for nearly two more years before he finally confessed in April 2018,” the U.S. attorney's news release said.

Until Thursday, the highest punishment for someone involved in a whooping crane shooting was a $500 fine and 45 days in jail for Lane Thomas Thibodeaux, who shot one of the birds in 2014.

“Judge Hanna said he would have given Constantin jail time under normal circumstances, but that prisons in Louisiana are already overcrowded and dangerous due to the pandemic,” the crane foundation said, referring to the coronavirus outbreak.

Hanna put Constantin on probation for five years. He said Constantin must complete 360 hours of community service related to wildlife conservation for Wildlife and Fisheries within that time and before he can hunt again.

"I think these birds are basically priceless,” Hanna said during the hearing, according to the crane foundation, which said he ordered Constantin to pay for one of the two birds he and the juvenile shot.

“This case sets a good precedent moving forward in Louisiana,” Smith said. "Whooping cranes are a valuable part of Louisiana’s cultural and natural heritage, and people who choose to shoot them will face the consequences.”

The two cranes killed were both hatched in captivity in 2015 at Patuxent Wildlife Research Center in Maryland and taken that December to White Lake Wetlands Conservation Area in Gueydan, Louisiana. They had been in the wild for about five months and in the Rayne area for about a month at the time of the shooting.

State wildlife agents had originally cited Constantin and the juvenile on charges of violating the Endangered Species Act, hunting from a public road and obstructing justice.

“Our agents take any investigation of illegally shooting whooping cranes very seriously," state Wildlife and Fisheries Secretary Jack Montoucet said in the federal release. "Chief of LDWF Enforcement Col. Chad Hebert and I applaud the judge in this case for imposing severe monetary punishments to help deter anyone from this behavior.”