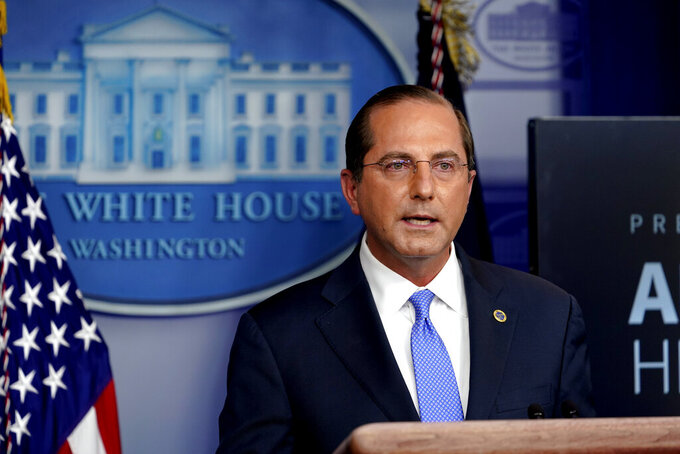 FILE - In this Friday, Nov. 20, 2020 file photo, Health and Human Services Secretary Alex Azar speaks during a news conference in the briefing room at the White House in Washington. A federal judge in Maryland has denied the Trump administration's request to reinstate a rule that would require women to visit a hospital, clinic or medical office to obtain an abortion pill during the COVID-19 pandemic, noting that public health risks for patients only have grown worse. In March, dozens of anti-abortion advocates signed a letter to Azar in which they called for halting abortion procedures during the pandemic. (AP Photo/Susan Walsh, File)

COLLEGE PARK, Md. (AP) — A federal judge in Maryland has denied the Trump administration's request to reinstate a rule that would require women to visit a hospital, clinic or medical office to obtain an abortion pill during the COVID-19 pandemic, noting that public health risks for patients only have grown worse.

U.S. District Judge Theodore Chuang, who agreed to suspend the rule in July, refused Wednesday to lift or limit the scope of that order. He rejected the administration's argument that economic conditions and patients' access to medical facilities, childcare and transportation have improved sufficiently to warrant dissolving the preliminary injunction.

Infection and hospitalization rates are soaring across the U.S., and the nation is going through what the coordinator of the White House Coronavirus Task Force has deemed the “most deadly phase of the pandemic," the judge noted.

“Accordingly, while the progress on vaccines and medical treatments for COVID-19 are cause for optimism and may advance the day that the Preliminary Injunction will no longer be warranted, the impact of these advances to date has not meaningfully altered the current health risks and obstacles to women seeking medication abortions,” Chuang wrote.

The judge also said the Trump administration has not presented any evidence that its temporary inability to enforce the rule has caused any harm to the government or to patients.

Chuang’s order in July temporarily prohibits the U.S. Food and Drug Administration from enforcing the “in-person requirements” for dispensing the drug mifepristone during the pandemic. The judge concluded that the rule imposes a “substantial obstacle” to abortion patients and likely is unconstitutional under the pandemic's circumstances.

Justice Department attorneys appealed Chuang's July 13 order. In October, the U.S. Supreme Court ruled that the government could present a request to dissolve or modify the injunction based on new evidence and directed Chuang to rule on it within 40 days. The Supreme Court did not rule on the merits of Chuang's decision.

Chuang didn’t set any geographic limitations on the injunction. He refused Wednesday to reconsider the national scope of his decision, saying the pandemic’s conditions are “uniformly dire across the nation.”

“Thus, at the present time, there is no meaningful basis by which to distinguish one state or region from others as uniquely free from the health risks, and thus the undue burden, imposed by the COVlD-19 pandemic,” he wrote.

The FDA approved mifepristone to be used in combination with a second drug, misoprostol, to end an early pregnancy or manage a miscarriage. Chuang’s ruling allows health care providers to arrange for mifepristone to be mailed or delivered to patients during the pandemic.

The preliminary injunction is due to expire 30 days after the end of the public health emergency declared by the secretary of the U.S. Department of Health and Human Services.

“With the positive news relating to vaccines, there is reason to hope that day will come soon,” Chuang wrote.

The American College of Obstetricians and Gynecologists and other groups sued HHS and the FDA in May to challenge the rule. American Civil Liberties Union attorneys represent the groups.

“The Trump administration’s argument that this travel mandate for abortion patients no longer poses significant COVID-19 risks is violently out of touch with reality,” ACLU attorney Julia Kaye said in a statement Wednesday.

Plaintiffs’ attorneys have argued that the FDA’s in-person requirements infringe on women’s constitutional rights to an abortion and violate the due process clause of the Fifth Amendment.

Government lawyers have argued that the requirements are necessary to ensure that patients safely use mifepristone. In March, dozens of anti-abortion advocates signed a letter to HHS Secretary Alex Azar in which they called for halting abortion procedures during the pandemic.

The ACLU's lawsuit says the FDA rule has “particularly severe implications for low-income people and people of color, who comprise a disproportionate share of impacted patients and who are already suffering and dying from COVID-19 at substantially higher rates.” Chuang cited evidence that Black and Hispanic people between 25 and 34 years old are more than 700% more likely to die from COVID-19 than white people in the same age range.