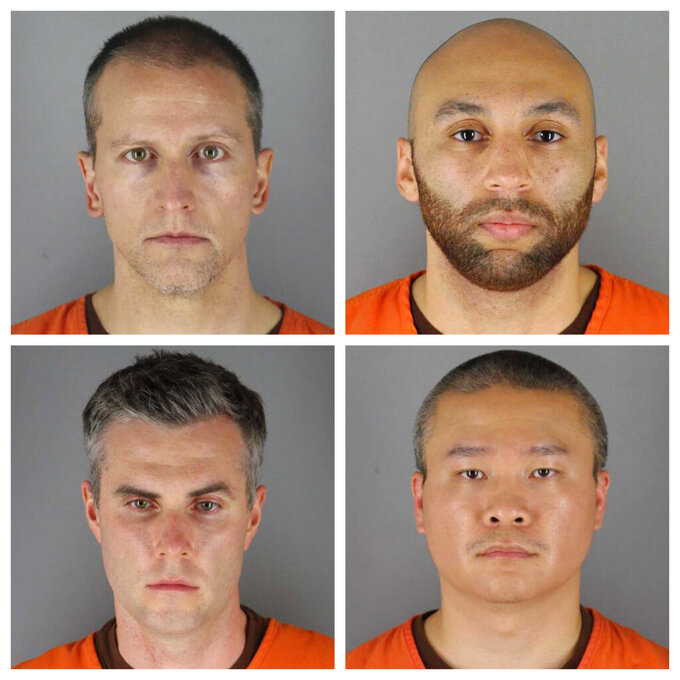 FILE - This combination of file photos provided by the Hennepin County Sheriff's Office in Minnesota on June 3, 2020, shows, top row from left, Derek Chauvin, and J. Alexander Kueng, bottom row from left, Thomas Lane and Tou Thao. A judge on Thursday, Nov. 5 declined defense requests to move the trial of the four Minneapolis police officers charged in George Floyd's death, and also ruled that all four would be tried in a single proceeding. (Hennepin County Sheriff's Office via AP, File)

MINNEAPOLIS (AP) — A judge on Thursday rejected defense requests to move the trial of four former Minneapolis police officers charged in George Floyd's death, and also ordered that all four will be tried together instead of separately.

Hennepin County Judge Peter Cahill ruled after defense attorneys had argued that pretrial publicity had made it impossible for the four men to get a fair trial in Minneapolis. They also cited a Sept. 11 hearing in which the men and their attorneys were confronted by angry protesters outside the courthouse, raising safety issues. Defense lawyers argued that witnesses could be intimidated, and jurors could be affected by chants from a crowd outside.

But Cahill said he was not convinced that moving the trial would improve security, and that he believes the jury can be protected from outside influences.

“No corner of the State of Minnesota has been shielded from pretrial publicity regarding the death of George Floyd. Because of that pervasive media coverage, a change of venue is unlikely to cure the taint of potential prejudicial pretrial publicity,” he wrote.

Cahill said he was willing to revisit the issue if circumstances warrant. Moving the trial away from Minneapolis to a less diverse area also likely would affect the makeup of the jury, though the judge didn't address that issue. In a separate order, however, he said the names of the jurors will be kept confidential, and that jurors will be fully sequestered during deliberations and escorted to the courthouse as a group.

The judge also ruled that the trial can be televised and streamed live, saying cameras will ensure the defendants' right to a public trial and the public's right to access during this time when spacing restrictions due to COVID-19 leave little to no room for spectators.

Defense attorneys also argued that the men should face separate trials, as each officer tried to diminish his own role in Floyd’s arrest by pointing fingers at the others. But Cahill rejected that too, saying the complications of separate trials were too great and that trying the officers together would “ensure that the jury understands ... all of the evidence and the complete picture of Floyd's death.

“And it would allow this community, this State and the nation to absorb the verdicts for the four defendants at once,” he concluded. Cahill said the critical evidence is the same for all men, and one trial would keep witnesses from having to testify multiple times.

Floyd, a Black man in handcuffs, died May 25 after Derek Chauvin, who is white, pressed his knee against Floyd’s neck for several minutes even after he said he couldn’t breathe. Floyd’s death sparked protests in Minneapolis and beyond, and led to a nationwide reckoning on race. All four officers were fired. They are scheduled to stand trial in March.

Tom Plunkett, Kueng's attorney, said in a statement that he is reviewing Cahill's orders. “My goal is to assure that a fair trial occurs for Mr. Kueng. We are happy to have the orders so we can start preparing for our trial and presenting the truth in front of a jury,” he said.

Defense attorneys for Chauvin and Lane had no comment on the judge's rulings. Thao's attorney did not return messages seeking comment.

Minnesota Attorney General Keith Ellison, whose office is prosecuting the case, praised the rulings as "another significant step forward” in the pursuit of justice for Floyd and the community.

So did Ben Crump and Antonio Romanucci, attorneys for Floyd's family. They said Black defendants rarely are granted change-of-venue requests and that the officers "should rightly face a jury of their peers in the city where this tragedy took place.”