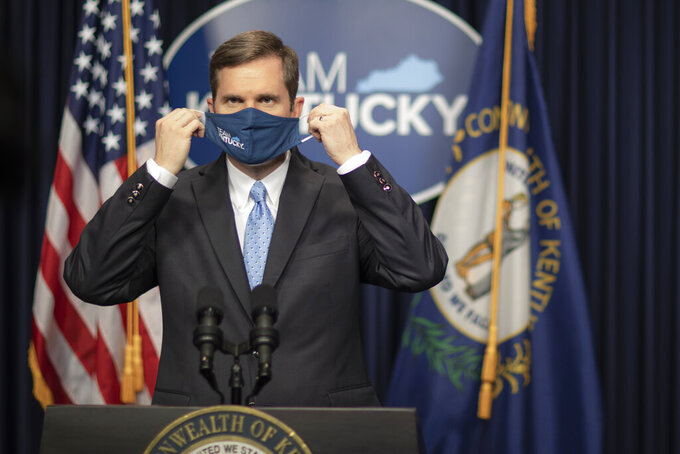 Kentucky Gov. Andy Beshear takes off his facial mask before providing an update on the COVID-19 pandemic in the state during a media conference at the Kentucky state Capitol in Frankfort, Ky., on Thursday, Jan. 21, 2021. (Ryan C. Hermens/Lexington Herald-Leader via AP)

FRANKFORT, Ky. (AP) — Kentucky's governor won a quick court order Wednesday to temporarily block a new law that he argues would dangerously weaken the state's response to the COVID-19 pandemic.

Hours after an initial court hearing, a judge issued a restraining order to halt one of the three new laws being challenged by Democratic Gov. Andy Beshear. Franklin County Circuit Judge Phillip Shepherd said the law could create “chaos" and undermine measures intended to combat the deadly disease. He ordered that the law be delayed until he hears more arguments in the case.

Shepherd's ruling adds a new wrinkle to Beshear's showdown with Republican lawmakers over the extent of his executive powers to order coronavirus-related restrictions. GOP legislators argue that the governor overreached with restrictions on businesses and individuals.

Responding to the judge's order, the governor said it will keep in place the “difficult but necessary steps” taken to slow the spread of COVID-19 in Kentucky.

“I don't use emergency powers because I want to,” Beshear said in a statement Wednesday night. “I use them because it is my duty to preserve the lives of Kentuckians.”

Senate President Robert Stivers said Republican lawmakers want to review the judge's order to “better understand” his rationale. Stivers welcomed the judge's lack of immediate action on the other two GOP-backed laws, saying: “It is apparent from the court's ruling that the majority of the actions of the General Assembly were within the law.”

In his order, Shepherd said the governor had demonstrated that his “constitutional duty” to adopt emergency measures to curb the virus's spread would be impaired if the one new law took effect immediately. Earlier Wednesday, Beshear's attorney said the measure threatened to immediately undo many of the governor's orders to combat the virus, including his mask mandate.

In his order, Shepherd said he was concerned that law “could create chaos and undermine any effective enforcement of public health standards to prevent the spread of this deadly disease."

That law would allow businesses and schools to comply either with COVID guidelines from Beshear or the federal Centers for Disease Control and Prevention — whichever standard is least restrictive.

The judge's action capped a rapid chain of events over the past 24 hours.

On Tuesday, Republican lawmakers who control the legislature reined in Beshear's emergency powers by overriding a series of vetoes by the governor. Beshear promptly filed a lawsuit claiming the measures violate separation-of-powers provisions in the constitution.

Victor Maddox, an assistant to Republican Attorney General Daniel Cameron, said at Wednesday's court hearing that the “status quo is actually unchanged from the day before,” even though the new laws took effect immediately. None of the governor’s COVID-related orders had been set aside, Maddox said.

Amy Cubbage, the governor's general counsel, disputed that in taking aim at the law allowing businesses and schools to choose between the governor's orders or CDC guidelines. Unlike a companion law limiting Beshear's executive powers, it does not have a phase-in period, she noted.

“This can be interpreted to completely undo the mask regulation and any capacity limits," Cubbage said during the court hearing conducted by Zoom. "We could have large-scale events tomorrow.”

Beshear warns that large gatherings risk accelerating the spread of COVID-19, and touts his long-running mask mandate as a key preventative step that has saved lives. In seeking an order to block the measure, Cubbage said it creates an “immediate emergency” due to confusion about what rules are in place.

At the court hearing, Shepherd urged both sides in the lawsuit to engage in “good-faith negotiations” to try to resolve disputes so there isn’t a “cloud of uncertainty” about what rules will apply in combating the pandemic. Stivers and House Speaker David Osborne, both Republicans, are among the defendants in the governor’s lawsuit.

All three new state laws targeted in Beshear's lawsuit included emergency clauses that let them take effect immediately. The GOP-backed measures amounted to a repudiation of the governor’s nearly 11-month strategy to contain the spread of the coronavirus.

Beshear maintains the steps he took to limit activity during the pandemic have saved lives. GOP lawmakers contend Beshear restrictions were inconsistent and imposed unilaterally.

Another contested law would limit the governor’s executive orders in times of emergency to 30 days unless extended by lawmakers. It applies to orders that restrict in-person meetings of schools, businesses and religious gatherings or impose mandatory quarantine or isolation requirements.

“The 30-day clock that the legislation creates is likely now running,” Maddox said at the hearing.

The other new law being challenged would give legislative committees more oversight and control over the governor’s emergency administrative regulations.

It’s the latest round of court fights over Beshear’s response to the pandemic. Last year, Kentucky’s Supreme Court upheld the governor’s authority to issue coronavirus-related restrictions on businesses and individuals to try to contain the spread of COVID-19.