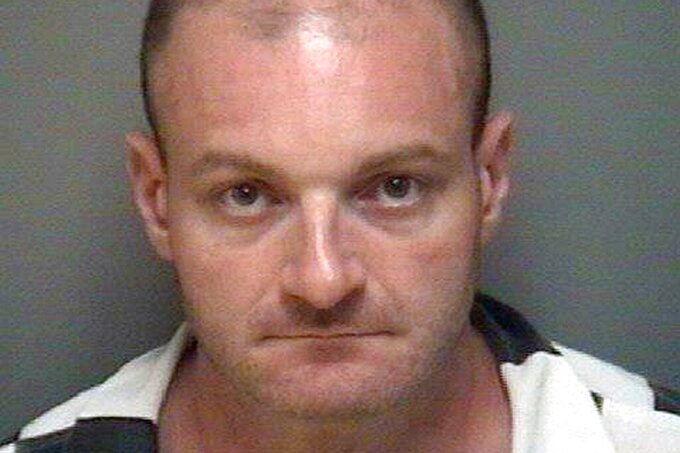 This undated booking file photo provided by the Albemarle-Charlottesville Regional Jail shows Christopher Cantwell, of New Hampshire. On Monday, Sept. 28, 2020, a federal jury in Concord, N.H., found a Cantwell guilty of threatening to rape the wife of a man who was part of a racist group he felt was harassing and bullying him. (Albemarle-Charlottesville Regional Jail via AP, File)

CONCORD, N.H (AP) — A self-proclaimed white nationalist who rose to prominence during a deadly 2017 rally in Charlottesville, Virginia, was found guilty Monday by a federal jury of threatening to rape the wife of a man who was part of a racist group he felt was harassing and bullying him.

Christopher Cantwell, a 39-year-old New Hampshire resident and radio host, was found guilty of extortion and threatening to injure property or reputation but not guilty of cyberstalking related to a series of threats he made toward a Missouri man over the Telegram messaging app.

The jury deliberated for a few hours following the four-day trial. Cantwell faces up to 22 years in prison and will be sentenced Jan. 4. He will remain in Strafford County jail.

“We're pleased that justice has been done and we're glad to have been vindicated,” Assistant U.S. Attorney John Davis said after the verdict.

Davis said he hoped there would be a “deterrent value” in the conviction that might resonate among “everyone on the internet and the white nationalist world and other worlds where really abhorrent things are said.”

“You do have a right to free speech and there is a First Amendment," he said. “But when you violate the regulate norms that apply — you can't threaten someone as part of an extortion attempt — it isn't going to matter even if it is in the white nationalist internet world."

Cantwell, dressed in a shirt and tie and wearing a mask, did not appear to show any visible reaction to the verdict. His defense team declined to comment.

Authorities say Cantwell used the Telegram messaging app to convey a threat last year that he would rape the man’s wife if he didn’t give up information about the leader of a white supremacist group of which the man was a member, authorities said. The Associated Press is not naming the man to protect the identify of his wife.

He was arrested in January on federal charges and had pleaded not guilty.

Cantwell is also accused of threatening to expose the man’s identity and warning “you will lose everything you have” if he didn’t provide the personal details about the leader of the Bowl Patrol. The group’s name was inspired by the haircut of Dylann Roof, who was sentenced to death for fatally shooting nine Black church members during a Bible study session in Charleston, South Carolina.

Cantwell followed through on another threat to report the Missouri man, who has several children, to the state’s child division for drug use and racist views. But an agency official testified at the trial that it did not feel the complaint justified further investigation.

Cantwell’s attorney, Eric Wolpin, on Friday acknowledged in his closing remarks that his client's language was “obscene” and “over the top.” But he said it never rose to the level of an actual threat, nor was it tied to anything of value.

He portrayed Cantwell as angry over harassment and bullying from the Bowl Patrol. Members disrupted his radio show for months with pranks and defaced his website with pornography and violent content, Wolpin said.

Cantwell previously pleaded guilty to assault in 2018 after he was accused of using pepper spray during a white nationalist rally in Charlottesville in 2017. He didn’t serve additional jail time but was barred from Virginia for five years.

This was the second federal jury trial to be held in the District of New Hampshire, since proceedings were delayed by the coronavirus pandemic. All participants wore masks and practiced social distancing and microphones were disinfected between witnesses.

Last year, attorneys who filed a federal civil rights lawsuit in connection with the Charlottesville rally asked a judge to order Cantwell to stop making “unlawful threats” against the plaintiffs and their lead attorney.

Cantwell is one two dozen groups and individual defendants in that case that is expected to go to trial in April.

“Today marks an important step toward accountability for Cantwell’s long history of violence and bigotry,” said Amy Spitalnick, the executive director of the civil rights group Integrity First for America which is funding the lawsuit.