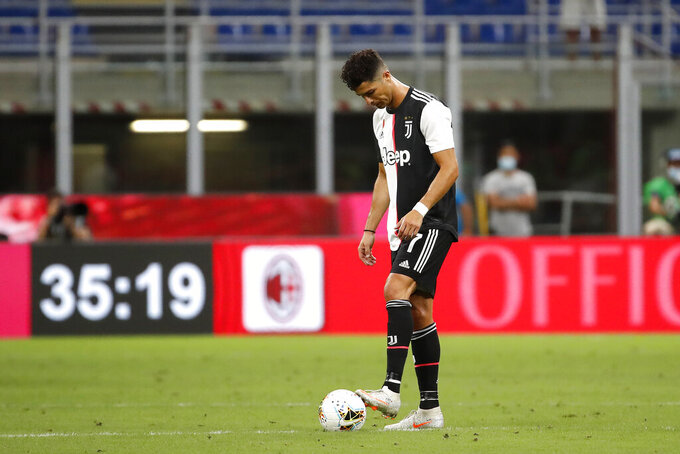 MILAN (AP) — Juventus missed the chance to take a big step toward a ninth successive Serie A title as it let a two-goal lead slip away in a surprising 4-2 loss at AC Milan on Tuesday.

After second-place Lazio lost 2-1 at relegation-threatened Lecce earlier, Juventus could have extended its lead at the top of the table to 10 points with a win.

“We had 60 good minutes. We were in control of the game, then there was a blackout. No need to dwell on that as we have another match in a few days," Juventus coach Maurizio Sarri said.

“It has happened to other teams, because this is a difficult time for everyone, physically and mentally. We must remain calm, also because the reasons for certain situations are difficult to find.”

Milan moved up to fifth, boosting its chances of securing a Europa League spot.

“If I had been here from the first day, we would have won the title,” said Milan forward Zlatan Ibrahimović, who arrived in January.

A tight first half finished scoreless after Ibrahimović had a goal ruled out for offside shortly before the break.

But Adrien Rabiot broke the deadlock two minutes after the restart by curling a strike into the top right corner. And Cristiano Ronaldo doubled Juve's lead six minutes later.

However, Milan turned the match around in the space of five minutes.

First Ibrahimović converted a penalty in the 62nd minute following a handball from Leonardo Bonucci. Then came quickfire goals from Franck Kessié and substitute Rafael Leão.

Milan extended its advantage 10 minutes from full time when Giacomo Bonaventura capitalized on an error from Juventus defender Alex Sandro to set up Ante Rebić.

Lecce missed a penalty and also had a goal disallowed, but still managed an upset win over title-chasing Lazio.

Fabio Lucioni and Khouma Babacar scored for Lecce after Felipe Caicedo had given Lazio an early lead.

Lazio’s bad night was made worse when defender Patric was sent off for biting Giulio Donati in an incident that could lead to a lengthy ban.

Lazio was just a point behind Juventus when the season was halted because of the coronavirus pandemic. It was on a record unbeaten run of 21 straight matches but the capital side has lost three of its five matches since the season resumed.

“The break penalized us, we are not the same as before, especially on a mental level. However, this is not an excuse, but just a fact,” Lazio forward Ciro Immobile said. “But we have to finish the season well, also to not cancel everything good we have done in the last few months.”

Lecce moved out of the relegation zone, a point above Genoa, which hosts Napoli on Wednesday.

Lecce thought it had taken the lead after two minutes through Marco Mancosu but it was ruled out for handball in the buildup.

Instead, Lazio took the lead moments later when Lecce goalkeeper Gabriel slipped under pressure from Immobile. He still managed to parry the first Lazio attempt but Caicedo hit the rebound into an empty net.

Lecce leveled on the half hour mark when Babacar was left unmarked, eight yards out, to head in Filippo Falco’s cross.

The home side had a great chance to take the lead in first-half stoppage time but Mancosu blasted a penalty over the bar, following handball from Patric.

However, Lecce did go in front two minutes after the break when Lucioni headed in a corner.

Gabriel atoned for his early error with several saves to keep Lecce in front, including stopping Bobby Adekanye’s header from point-blank range, four minutes from time.