Kansas coronavirus deaths increase by 2 to 120 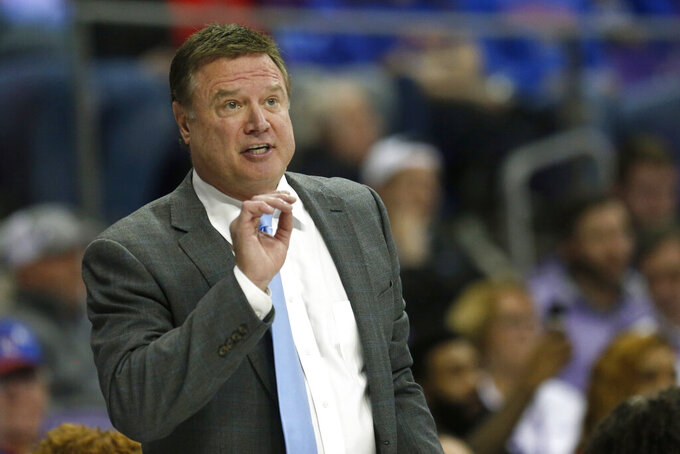 FILE - In this Feb. 8, 2020, file photo, Kansas head coach Bill Self reacts to a play as Kansas plays TCU during the second half of an NCAA college basketball game in Fort Worth, Texas. Kansas athletic director Jeff Long, football coach Les Miles and basketball coach Bill Self announced Monday, April 27, 2020, they had taken a 10% salary reduction for the next six months in an effort to save the athletic department nearly $500,000. The move comes as the COVID-19 pandemic is putting pressure on collegiate athletic departments nationwide to cut costs to keep afloat. (AP Photo/Ron Jenkins, Fle)

As of Monday, the number of deaths rose to 120, and the number of positive cases increased by 154 to 3,328. Nursing homes have been particularly hard hit, with 68 deaths, accounting for 57% of the state's total. Still, the actual number of infections is thought to be far higher because many people have not been tested and studies suggest that people can be infected without feeling sick.

Kelly said last week that is was working on plans to lift the stay-at-home order, which is set to expire Sunday.

The economic fallout has been rippling throughout the economy. University of Kansas Chancellor Douglas Girod announced Monday that the school was temporarily slashing the pay of high-ranking administrators and athletic staff in anticipation of the coronavirus causing tens of millions of dollars in financial losses. Girod said it was too soon to know whether furloughs, layoffs and salary reductions for other staff would be needed.

And the Kansas City suburb of Olathe announced that it will furlough nearly all employees for two weeks as tax revenues take a hit.