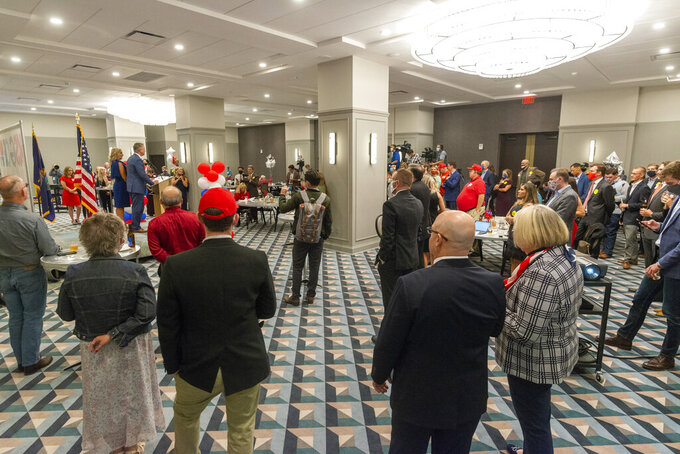 TOPEKA, Kan. (AP) — Republican Rep. Roger Marshall won an open Senate seat in Kansas on Tuesday in a tougher-than-expected race that saw his Democratic opponent raise far more campaign cash than he did.

Marshall, who has represented western and central Kansas in Congress for two terms, prevailed over Democratic state Sen. Barbara Bollier. After a tough campaign, he struck a conciliatory tone in his victory speech, saying his prayer was “for healing.”

Marshall entered the fall campaign with the GOP’s traditional advantages in a state that tends to vote for conservatives. But Bollier excited fellow Democrats because her campaign was able to raise more than $25 million and set a Kansas record that Marshall couldn’t match.

In a concession statement, Bollier said, “Remember, this race was never ‘supposed’ to be competitive at all.”

“Of course, this wasn’t the finale we hoped for,” she said. “But at a time of deep national cynicism — when faith in our democratic institutions hangs by a thread — I consider it a sacred, patriotic duty to accept tonight’s outcome.”

The race for Roberts’ seat was the most expensive in Kansas history. Spending on advertising by outside groups topped $41 million, with three-quarters of it coming from the Senate Leadership Fund aligned with Senate Majority Leader Mitch McConnell and other GOP groups to boost Marshall’s campaign. It also was the Democrats’ best shot to pick up a Kansas Senate seat since 1974, when then-Republican Sen. Bob Dole narrowly won reelection in the aftermath of the Watergate scandal that forced President Richard Nixon to resign.

Like other Democratic Senate candidates around the country, Bollier received millions of dollars in campaign contributions from outside of her home state as the party sought to overturn the GOP’s 53-47 Senate majority. While Marshall raised $6.5 million, outside groups poured more than $41 million into advertising, and three-quarters came from GOP organizations.

Marshall also benefitted from President Donald Trump carrying the state. He played up his loyalty to the president on the campaign trail and that resonated with some voters such as Thora Bean, an 83-year-old retired nurse and Republican. Bean voted Tuesday in Belle Plaine, south of Wichita, and backed Trump and Marshall, citing Bollier's support for abortion rights.

As for Marshall, she said: “I think he will go along with Trump with whatever Trump decides. He will be good for him.”

Bollier, a Kansas City-area state senator, was a lifelong moderate Republican who switched parties at the end of 2018, partly over her dissatisfaction with President Donald Trump and the Kansas GOP’s strong opposition to LGBTQ rights. She pitched herself as an independent and commonsense centrist.

She emphasized health care issues, such as protecting insurance coverage for pre-existing medical conditions. That appealed to Haley Miller, a 28-year-old health care scheduler and Democrat from the Kansas City suburb of Mission.

“I have family that has had cancer and I don’t want them to lose their insurance and not be able to get it back,” Miller said. “My mom had breast cancer, both breasts removed and things like that.”

Marshall and his allies portrayed Bollier as too liberal and too radical for Kansas, attacking her over her strong support for abortion rights and for gun control measures. They circulated video from an October event near Kansas City in which Bollier praised an Australian gun control law passed in response to a 1996 mass shooting that forced the owners of 700,000 firearms to sell them to the government.

The race also featured two physicians who have taken different approaches to the coronavirus pandemic. Bollier, a retired anesthesiologist, began her campaign by avoiding public events and later insisted on masks and social distancing.

Marshall, an obstetrician before he entered Congress in 2017, said he tried to have outdoor events, but he sometimes was indoors with people who didn’t wear masks or maintain social distance and he refused to endorse mask mandates. He also said at one point that he was taking the malaria drug hydroxychloroquine as an anti-coronavirus measure, even though experts say it isn’t effective against the disease.