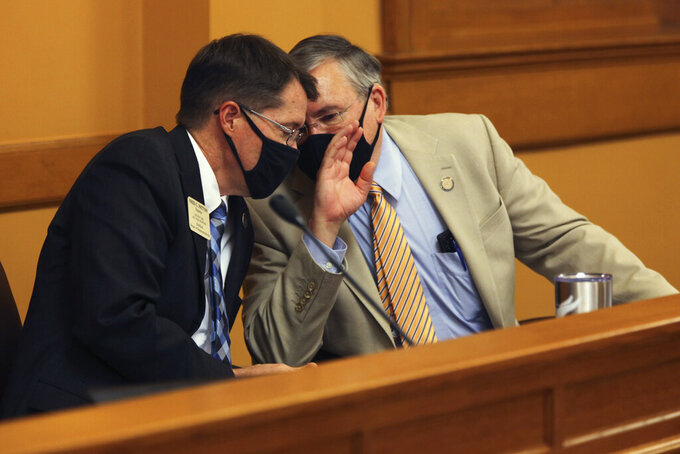 Rep. John Carmichael, right, D-Wichita, confers with Rep. Fred Patton, R-Topeka, during talks between House members and senators on a bill providing up to $500 million in compensation to small businesses harmed by coronavirus pandemic restrictions, Friday, May 7, 2021, at the Statehouse in Topeka, Kan. Patton is the House Judiciary Committee chair and backs the bill, while Carmichael considers it unnecessary. (AP Photo/John Hanna)

Kelly said in her veto message that the measure was “well-intentioned” but violated a federal coronavirus relief law enacted in March. She also suggested that Kansas already has a more transparent process for giving out relief funds through a task force she created last year.

Her veto sparked criticism in the Republican-controlled Legislature, particularly from conservatives who've argued for months that state and local government restrictions on businesses were too harsh and applied unfairly. House Majority Leader Dan Hawkins, a Wichita Republican, said Kelly’s administration is “a Death Star with the sole purpose of destroying the Kansas economy."

Kelly kept a stay-at-home order in place for five weeks last spring, defending it as necessary to prevent a surge in COVID-19 cases from overwhelming hospitals, as it had in Europe. She later sought a phased reopening of the economy, but lawmakers forced her to accept local control of such decisions to keep a state of emergency for the pandemic in place.

Ryan Kriegshauser, an attorney for a Wichita fitness studio and its owner, who sued the state in December over pandemic restrictions, said the federal law cited by Kelly is “incredibly ambiguous." He said the bill also had a provision nullifying its contents if they were found to violate federal law.

Supporters of the bill were short of the two-thirds majorities in both chambers necessary to override a veto when the bill passed earlier this month because Republicans were split and Democrats opposed the measure. Lawmakers have been out of session since May 8 and have only one more day scheduled for possible business this year, Wednesday.

“She could have let it go into law, and all of this would be sorted out,” Kriegshauser said. “She is using this as an excuse to play politics.”

One provision gives top legislators more say in how Kansas spends its federal coronavirus relief funds, outside of the business compensation program. Another prevents the state from tracing the close contacts of people infected with COVID-19 unless their participation is voluntary, and a third bans state agencies from issuing vaccine passports — something Kelly has said she's not interested in doing.

The vetoed bill would require the state, cities and counties to set aside as business aid part of the federal relief funds that aren't designated for a specific purpose. Lawmakers and others estimated during legislative debates that the figure would be roughly $500 million.

Under the measure, compensation would go to businesses with 50 or fewer employees if they could show they were harmed by pandemic restrictions. The bill's supporters said they targeted the compensation to small businesses because they're far less likely than large ones to be able to afford attorneys to file lawsuits.

But backers of the bill also argued that setting up a claims process also could avoid lawsuits and lessen the total payout for the state, cities and counties.

“Certainly, we all want to get money into businesses' hands that were closed and harmed,” said Kansas House Judiciary Chair Fred Patton, a Topeka Republican. “On the other side, we want to protect the state. We don't want to have hundreds of thousands of lawsuits filed.”

Kriegshauser's clients sued the state in December over how pandemic restrictions affected the business in what is believed the first such case arising from an emergency in Kansas. The studio and Attorney General Derek Schmidt, a Republican now running for governor, agreed to put the lawsuit on hold to give the Legislature a chance to provide compensation.

Democrats balked at the compensation bill partly because an appointed, three-member board would examine the claims — and in closed meetings, to protect businesses' financial information and trade secrets. The board would be housed in the attorney general's office, and some Democrats derided the GOP plan as a setting up a “slush fund” or “pot of gold” program.

The board's decisions would be reviewed by a joint legislative committee, and legislative leaders would have the final say. Supporters said that made the process open.