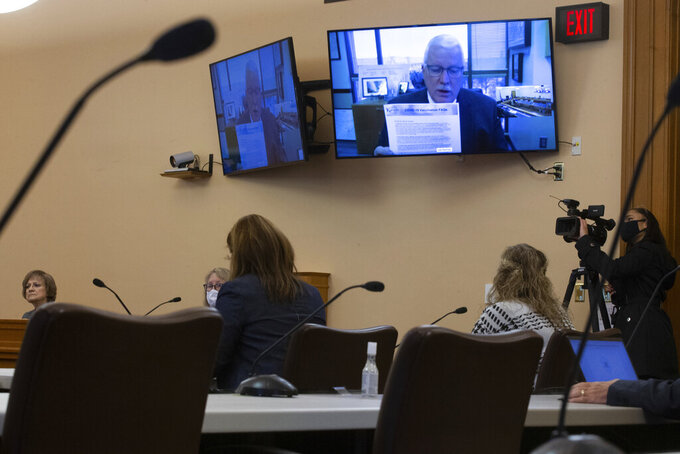 Lee Norman, Kansas secretary of health and environment, speaks via video conference to a joint committee between House and Senate members Tuesday, Jan. 26, 2021, at the Statehouse in Topeka, Kan. (Evert Nelson/The Topeka Capital-Journal via AP)

But Dr. Lee Norman, the head of the state health department and Kelly's top public health administrator, said the biggest problem Kansas faces in administering the vaccines is “there's just not enough.” He acknowledged during a joint meeting of the House and Senate health committees that he can't predict how long it will take for the state to inoculate enough people to say it no longer faces a pandemic emergency.

Republicans in the GOP-controlled Legislature have grown increasingly critical of Kelly and the state Department of Health and Environment, peppering Norman with pointed questions during Tuesday's meeting. One GOP lawmaker even argued that Kansas was wrong to focus on vaccinating health care workers first, rather than people 65 and older.

“I’ve never felt like our leadership, the Kelly administration, the KDHE, has learned lessons from this virus and adapted strategies to it,” said freshman Sen. Mark Steffen, a Hutchinson Republican and a physician, who didn't wear a mask at Tuesday's socially distanced meeting and said he doubts the effectiveness of mask wearing, despite a growing scientific consensus that masks provide protection for others as well as those wearing them.

The Democratic governor and Republican legislators have been sparring for months over the state's response to the pandemic, but GOP lawmakers have recently focused on what they see as a slow and rocky vaccine distribution.

Sen. Mike Thompson, a Shawnee Republican, said he wants to see the state get to the point where there are enough people who have been vaccinated or had COVID-19 and developed immunity to “getting our economy back in shape.” Norman said those two groups would have to cover at least 85% of the population — close to 2.5 million people, or nearly 10 times the 255,550 vaccine does the state says it has received so far.

“I understand that there are supply chain issues, but I think we need to get the access out to the people as fast as possible,” said Thompson, who declines to wear a mask because, he says, he suffers from asthma.

Norman, who testified by WebEx, said Kansas has received its full allotment of vaccine doses from the federal government but just doesn't have enough to gives shots as quickly as people want them.

Kelly announced last week that Kansas was entering its second phase of vaccine distribution, where anyone 65 and older, people in group living situations and “critical” workers are eligible for inoculations. Norman said that could be about 800,000 of the state's 2.9 million residents, or 27%.

“We are ordering everything that is allocated to us, and here in recent weeks we've been getting everything we've ordered," Norman said. "But there's no way on the planet that that's enough vaccine.”

Republican legislators have cited U.S. Centers for Disease Control and Prevention data showing Kansas lagging behind other states in vaccination rates. A CDC report Tuesday showed Kansas ranking 47th for doses administered per 100,000 residents, ahead of only Alabama, Idaho and Nevada.

The state health department reported that nearly 158,000 vaccine doses had been administered as of Monday; the CDC's figure is slightly higher.

Kansas reports that it has administered almost 62% of the vaccine doses it has received so far — something Norman touted as a sign that the administration of inoculations is on track.

However, the CDC said the state actually has received about 348,000 doses, which would put the percentage administered at roughly 45%. State officials said the CDC figures include doses shipped to pharmacies but not received for nursing home workers and residents.

House health committee Chair Brenda Landwehr, a Wichita Republican, questioned a state health department policy allowing residents of one county to go to another to get vaccinated, suggesting it sows confusion. Norman defended it, saying it has allowed counties to keep administering shots to health care workers so they weren't without protections.

Kelly and other state officials have said repeatedly that Kansas is following CDC guidelines in deciding when people are eligible for inoculations. But Steffen argued that Kansas should have put a priority on vaccinating older residents even ahead of health care workers.

About 25% of the people vaccinated have been 65 or older. While that group accounted for about 15% of the state's more than 269,000 confirmed and probable coronavirus cases through Monday, it had nearly 86% of the state's 3,622 deaths, with one death for every 13 reported cases.

“If you give it to a bunch of health care workers and you're just protecting them from flu symptoms, rather than giving it to people who you could save their life, that's questionable,” Steffen said.

This story has been corrected to show that Kansas’ ranking in CDC inoculation rates to 47th instead of 46th.