Kansas prison locked down due to 2nd COVID-19 outbreak 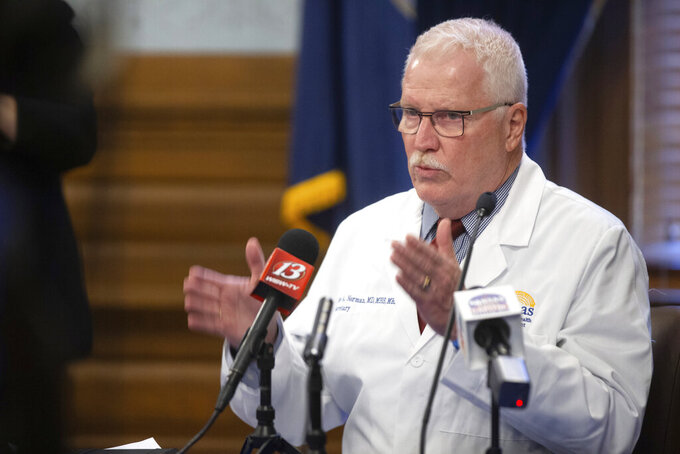 Lee Norman, Kansas secretary of health and environment, speaks to the press at the Statehouse during the coronavirus pandemic at a weekly briefing, Wednesday, Aug. 12, 2020, in Topeka, Kan. (Evert Nelson/The Topeka Capital-Journal via AP)

HUTCHINSON, Kan. (AP) — A Kansas prison has been locked down due to a coronavirus outbreak affecting nearly 100 inmates and staff at the facility, the government announced Wednesday.

Some inmates will remain locked in their cells because of the new outbreak, while others will be relocated to the prison in Lansing, where a medical unit has been set up to handle COVID-19 cases. Lansing was the site of an earlier outbreak in which more than 900 people became infected.

The announcement came one day after the Sedgwick County Detention Facility confirmed 112 inmates and 11 staff members had tested positive. The jail in the state's largest city of Wichita, which has about 1,510 inmates, is conducting widespread testing this week.

Dr. Lee Norman, the state’s top public health official, said battling the outbreak was particularly challenging at the Hutchinson prison because of its age. The prison dates back to the 1880s and some areas lack air handling to improve ventilation.

“It is going to be a problem facility," he said. “What they are doing now is the formula that has been successful. But in both of these, the cases have grown quite rapidly and we really have to pull out all the stops.”

The announcement came as the Kansas Department of Health and Environment reported 817 more confirmed cases of COVID-19 since Monday for a total of 32,547, and eight more deaths for a total of 395. The number of infections is believed to be far higher because many people have not been tested, and experts believe people can have the virus without feeling sick.

The outbreak has led to some youth sports cancellations. Although the Kansas State High School Athletic Association has decided not to cancel fall activities, the Kansas City, Kansas, school board voted Tuesday to opt out, The Kansas City Star reported. Fall sports in Kansas include football, volleyball, cross country, girls tennis and boys soccer.

Meanwhile, the City of Wichita decided Monday to postpone its youth football season until the spring, The Wichita Eagle reported.

“We talked about how we could isolate folks and how we could reduce the amount of numbers coming to the games, making sure everyone is wearing masks and other precautions,” Houtman said. “But it became more and more apparent that it was going to be really difficult to adhere to all of those requirements, and if we did, that would also be going against the county’s recommendation.”