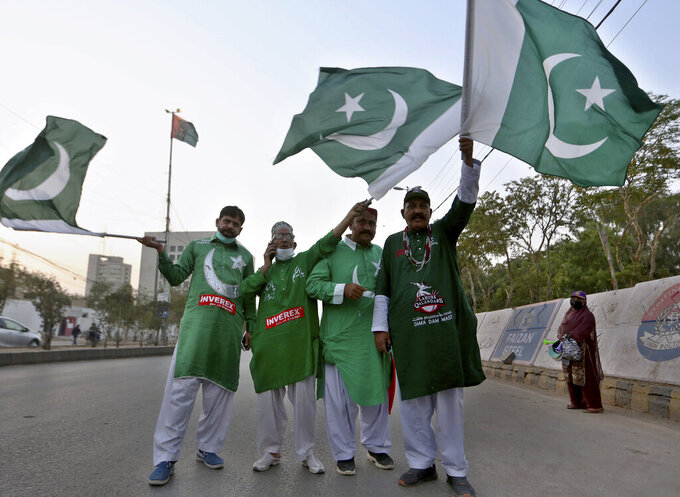 Cricket fans hold National flags while they arrive at the National Stadium to watch Pakistan Super League T20 cricket opening match between Karachi Kings and Quetta Gladiators at National Stadium, in Karachi, Pakistan, Saturday, Feb. 20 2021. Spectators returned to cricket stadiums in Pakistan for the first time since the coronavirus pandemic began when the sixth edition of the Pakistan Super League begins in the southern port city of Karachi. (AP Photo/Fareed Khan) 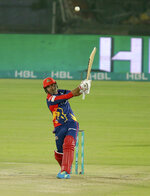 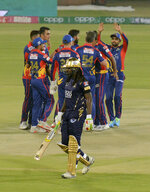 Around 4,000 mask-wearing fans at the National Stadium watched the home team dismiss Quetta for 121 in 18.2 overs in the opening game of Pakistan’s premier Twenty20 competition.

West Indies veteran Chris Gayle, playing in Pakistan after 14 years, top-scored for Quetta with 39 off 24 balls but Quetta lost wickets at regular intervals after being put into bat.

English wicketkeeper Joe Clarke hit a brisk 46 off 23 balls with six fours and three sixes as Karachi cruised to 126-3 with more than six overs to spare.

Karachi fast bowler Mohammad Amir, who has quit international cricket, pinned down free-scoring Gayle early on and completed 50 wickets in the PSL by claiming 1-14 in four overs.

“We had so many options with the ball and in fact (Mohammad) Nabi didn’t even bowl,” Karachi skipper Imad Wasim said.

Gayle showed the threat of his power-hitting by smashing two sixes and a four against fast bowler Aamer Yamin. But the 41-year-old West Indian was undone by Australian fast bowler Daniel Christian’s slower delivery and offered a tame catch at short third man as Quetta slipped to 68-4 in the ninth over.

Arshad Iqbal, a 20-year-old rookie fast bowler, was the pick of Karachi’s bowlers with 3-16 to restrict the 2019 champions to a below-par total.

“We were eyeing 170-180 at the start but we kept losing wickets,” said Quetta skipper Sarfaraz Ahmed, who opened the innings in the PSL for the first time, but scored only 7 runs.

“We will see where I play in the upcoming games as our middle order also didn’t click.”

Iqbal got his three wickets in successive overs that included the key dismissal of Ben Cutting (11), whose leg stump was knocked back by the fast bowler in the 15th over.

Clarke, who had earlier taken four catches behind the wicket in his debut PSL game, started off cautiously by scoring only one run off his first eight deliveries.

But he hit three boundaries and a six in Pakistan paceman Naseem Shah’s second over before smashing Afghanistan legspinner Qais Ahmed for three fours and two sixes.

Clarke finally holed out at long-on in the sixth over, but his brisk knock eased Karachi’s run chase.

Nabi finished the game quickly by smacking Cutting for three sixes in the 14th over to remain unbeaten on 30 off only 14 deliveries.

Karachi is hosting the first 20 league games. Lahore will then host the remaining 14 games, including the final on March 22.