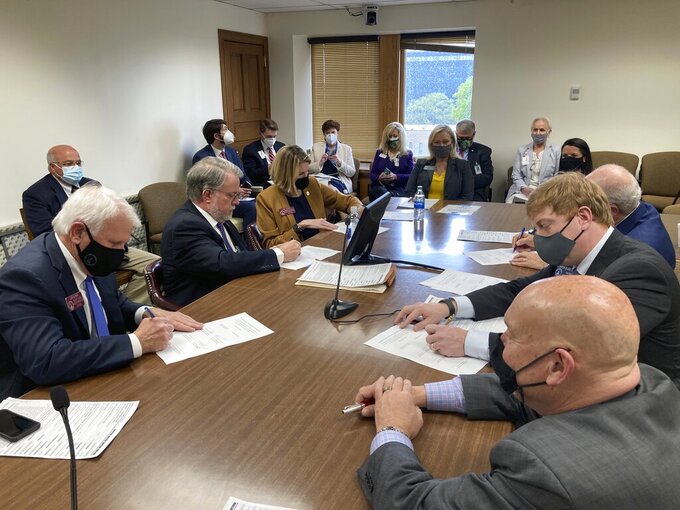 However, the Republican governor is telling agencies not to increase salaries for some state troopers and game wardens by creating new ranks, saying it would create inequity with other law enforcement personnel.

The plan spends $27.3 billion in state money and $22.5 billion in federal and other money in the year starting July 1, for total spending of nearly $50 billion.

Lawmakers put back a fraction of the $2.2 billion they cut last year when they feared a big drop in tax revenue because of the coronavirus pandemic. Billions of incoming federal aid will boost spending in some areas, with Kemp deciding how to spend $4.6 billion more.

A majority of cuts made last year to K-12 education would be restored, and some money would be added for mental health. But many other cuts in state money made last year would stay, with state spending still below what lawmakers had originally planned for this year.

K-12 school systems would still be $382 million short of full funding, but lawmakers said that school systems are getting $6.9 billion in federal money.

Lawmakers set aside $977,000 for the Department of Public Safety and $120,000 for the Department of Natural Resources to create new ranks for long-serving state troopers and game wardens, allowing officers who have reached the top of their pay scales to get a raise. The money is intended to keep officers from jumping to other agencies that pay better. Kemp, though, instructed agencies not to follow language he considered nonbinding.

“Retention for all public safety employees is a priority of the legislature and my administration," the governor wrote. "However, the creation of new job classes may cause unintended disparities between agencies.”

Kemp instead told the agencies to spend the money to increase employee retention within the existing pay structure. It wasn't immediately clear what that would mean.

Bank examiners, food inspectors and some Department of Driver Services employees will still get pay raises under the budget.

Finally, he rejected a plan to funnel $307 million in federal transit aid to Atlanta-area transit agencies, saying the state will have to wait on federal guidelines before determining how it can spend the money.

The budget includes some key Kemp initiatives, including plans to spend $40 million on a rural innovation fund and $10 million to extend high-speed internet in rural areas.

The plan puts back $58.9 million in cuts that were made last year in the Department of Behavioral Health and Developmental Disabilities, Georgia's main mental health agency, restoring funding for addiction treatment and creating a new behavioral crisis unit for those with developmental disabilities. It also increases payments for some mental health providers.

But Kemp told the department to disregard lawmakers’ instructions to spend $300,000 on facility upkeep, instead telling the agency to maintain, repair and dispose of facilities that are now vacant because the department’s patient census has fallen.

The state will increase payment rates to nursing homes by $90 million, saying nursing providers have been hit hard by the pandemic and need financial relief.

The budget will spend nearly $1 million more on domestic violence and sexual assault centers, with lawmakers saying those operations are facing a funding crunch.