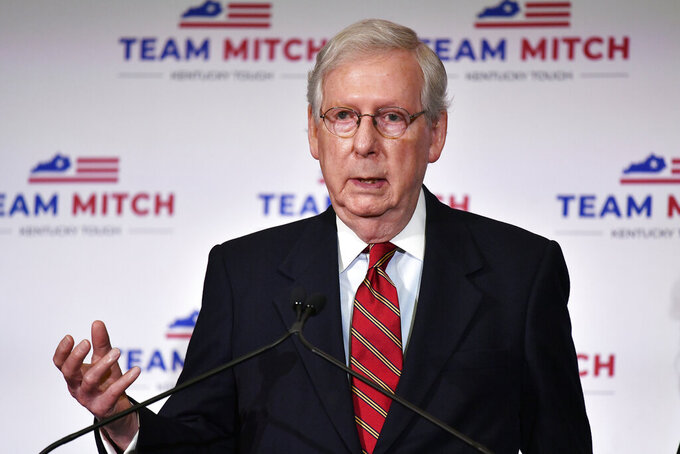 FRANKFORT, Ky. (AP) — Senate Majority Leader Mitch McConnell joined Republican leaders of the Kentucky legislature Friday to herald what he said was the final step in a transformation of the state's political landscape in Tuesday's election.

“It is a dramatically different state than what it was,” said McConnell, who was himself a big winner in his bid for a 7th term.

McConnell, still waiting to learn if he will retain his status as majority leader in Washington, deflected questions about the fairness of the election, with both the presidency and control of the Senate hanging in the balance. Republicans are clinging to a narrow majority with several races still too early to call and at least one Georgia Senate race headed to a runoff.

But McConnell celebrated the successes of his fellow Kentucky Republicans, who expanded overwhelming majorities in Kentucky’s General Assembly in Tuesday’s election, likely increasing their ability to push back against Democratic Gov. Andy Beshear.

Republicans made gains throughout the state, notably knocking off Democratic incumbents who had defeated Republicans in 2018 in suburban areas. As of Tuesday's election, Republicans have picked up 73 house seats, though two state house races have yet to be called. They also won 14 state senate races, while Democrats won five.

McConnell commended his fellow Republicans, calling the election results a final step in Republican’s decades-long mission to reshape what once was a Democratic stronghold into reliably GOP territory.

The continued Republican super-majority could also enable the General Assembly to circumvent Beshear's emergency statewide mandates intended to slow the spread of the coronavirus as the number of cases has continued to surge in the Bluegrass State. The 2,318 new cases announced Thursday represented a new one-day record.

Since the coronavirus outbreak began in March, Kentucky’s majority Republican legislature has frequently clashed with Beshear over a series of virus-related executive orders he has issued.

While Senate President Robert Stivers praised the GOP gains as transformative, he said the intensity of the presidential race played a role in increasing margins in urban and suburban areas. The governor's shutdown orders in the early days of the pandemic were also a factor, he said.

“I don’t think it is a referendum but I definitely think it’s a reflection,” said state House Speaker David Osborne, repeating Stivers assertions that Kentuckians are dissatisfied with Beshear's actions.

Both politicians said they see the 30-day session in January 2021 as an opportunity to challenge Beshear on some of his coronavirus-related mandates.

“I think it’s clear to everybody up here that you just look at the map. You look at the numbers; you look at the returns," Stivers said. “The state wants to go in the direction we want to move in.”