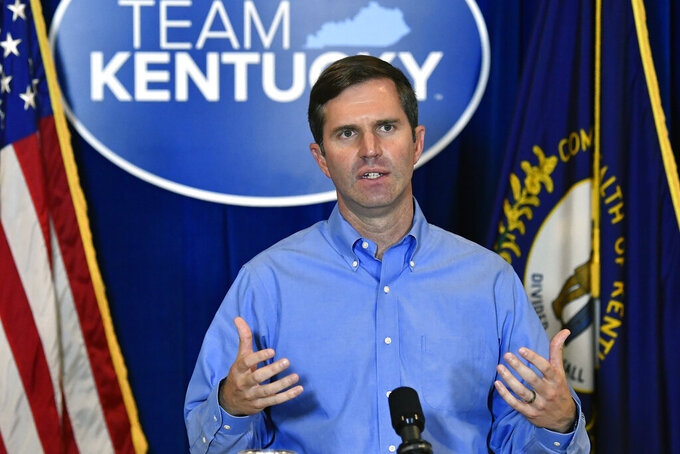 Kentucky Governor Andy Beshear addresses the media following the return of a grand jury investigation into the death of Breonna Taylor at the Kentucky State Capitol in Frankfort, Ky., Wednesday, Sept. 23, 2020. Gov. Beshear has made a request to the Kentucky Attorney General Daniel Cameron to release the grand jury transcripts to the public. (AP Photo/Timothy D. Easley)

FRANKFORT, Ky. (AP) — Kentucky's governor delayed his budget speech to state lawmakers in response to violent protesters he denounced as “domestic terrorists” for storming the U.S. Capitol on Wednesday.

Democratic Gov. Andy Beshear said he and the two legislative leaders agreed to call off his speech until Thursday evening. The governor had been scheduled to deliver his State of the Commonwealth speech Wednesday.

“We all recognize the gravity of this situation," Beshear tweeted in response to the protests in the nation's capital by supporters of President Donald Trump.

The governor will present his budget proposals for the coming fiscal year and other priorities in his speech, which will be delivered virtually because of the COVID-19 pandemic.

In a social media video Wednesday, Beshear condemned the protests at the U.S. Capitol.

“Today, there cannot be Democrats or Republicans, there can only be Americans and all of us must condemn this,” the governor said. “If you’ve been standing with and riling up militia members across this commonwealth or this country, shame on you.”

“If you believe in America, what you’re seeing in Washington, D.C., cannot be acceptable,” he added.

Responding to the protests, Osborne said in a statement: “Violence, destruction and looting are not the strategies of patriots but the weapons of anarchists."

The speaker added that once the protest is quelled, “we must look back and determine what brought us here and find a path forward paved with respect.” Stivers said: “This deplorable act of violence that took place at the Capitol Building should be condemned by all.”

On Tuesday, protesters placed signs outside Kentucky’s Capitol calling for Beshear’s impeachment as lawmakers opened their 2021 session. Another sign declared: “Make hanging traitors great again,” months after the governor was hanged in effigy for his COVID-19 restrictions.

Beshear later said the protesters were “outnumbered by yard signs.”

“I’m just not intimidated by yard signs,” he added.

The state Republican Party, which has criticized the governor’s COVID actions, denounced the sign proposing hanging as an “abhorrent and outrageous display.”

Last year, Beshear was hanged in effigy by armed protesters near the state Capitol during what was billed as a rally in defense of constitutional rights, including the right to bear arms. The demonstration turned into a protest against coronavirus restrictions and Beshear’s administration, with protesters chanting outside the Governor’s Mansion for him to come outside. Beshear later vowed not to back down and condemned their use of “fear and terror.”