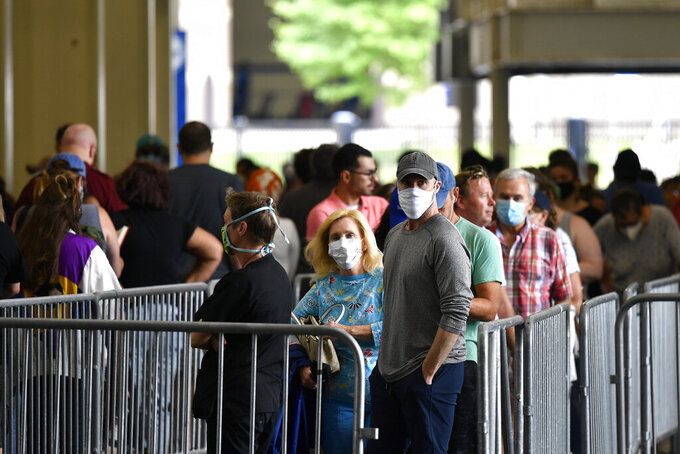 LOUISVILLE, Ky. (AP) — Republican congressional incumbents breezed to their party’s nominations Tuesday night, but many races in Kentucky were left in suspense and won’t be resolved for days after an unprecedented primary election coming amid the coronavirus pandemic.

Among the high-profile races decided was the GOP congressional primary in Kentucky's 4th District. U.S. Rep. Thomas Massie defeated challenger Todd McMurtry to cap a bare-knuckled race that included attacks over whose allegiance to President Donald Trump was strongest.

Three other GOP congressional incumbents from Kentucky — Hal Rogers, Brett Guthrie and Andy Barr — cruised to primary victories, as did Senate Majority Leader Mitch McConnell, who is seeking a seventh term. Barr's victory came several days after he suffered a tragedy with the death of his wife.

Topping the list of undecided races was the contest for the Democratic nomination to challenge McConnell in the fall. Former Marine pilot Amy McGrath and freshman lawmaker Charles Booker were the leading vote-getters in the crowded Democratic primary, with results unreported from the state's two largest cities, Louisville and Lexington. Louisville is Booker's hometown. The race was too early to call Tuesday night.

Many outcomes might not be known for a week. Officials in some counties had indicated they would wait until every vote is counted before announcing results. County clerks must submit vote totals to the secretary of state’s office by June 30 — a week after the election.

The state’s Republican secretary of state, Michael Adams, proclaimed the state’s handling of the altered election — which included single polling places in the state’s two largest cities — a success.

“While all eyes were on Kentucky today, we offered the nation a model for success in conducting an election during a pandemic,” he said.

Adams noted that turnout was “through the roof." Besides allowing registered voters to send absentee ballots by mail, the state had two weeks of early voting. Adams said the state typically sees about 20% turnout for a primary election but expects it to exceed 30% in this primary.

Richard Beliles, Common Cause Kentucky board chairman, said the primary “went remarkably smoothly for most who made it to the polls but certainly not for all."

“We don’t know how many never made it to the polls in the first place in an election where many counties -– including those encompassing Louisville and Lexington — had only one polling location for voters," he said.

In Louisville, a judge allowed a large group of late voters into the city's only polling place after they were held up by traffic. The doors at the Kentucky Fair and Expo Center, the polling location, were locked at 6 p.m. but a group gathered outside. Video from news outlets showed the group banging on doors outside the center.

Jefferson Circuit Judge Annie O'Connell ordered the doors back open until 6:30 p.m. after two Democratic U.S. Senate candidates asked for the order. O'Connell wrote in a ruling Tuesday evening that “traffic congestion” was cited as a reason why the voters were late getting to the polls.

About 175 more voters were let in after the court reopened the polling location, Jefferson County Clerk spokesman Nore Ghibaudy said.

Advocacy groups also called for extended voting time in Lexington, citing long lines and waits of more than an hour. Voters who got into a long line in Lexington before the polls closed were allowed to vote until nearly 8 p.m. Tuesday.