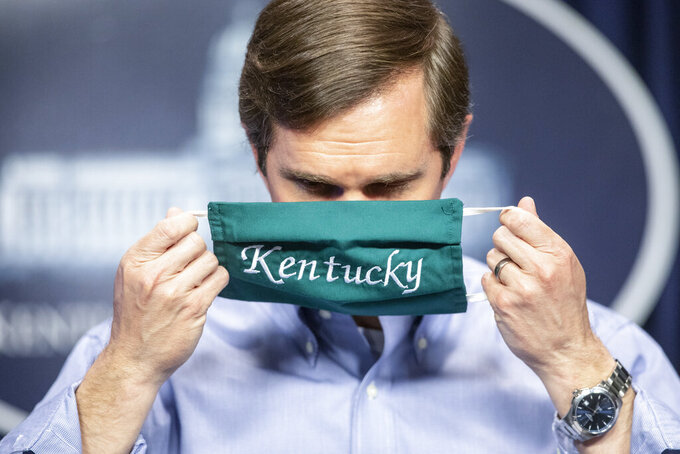 FILE - In this May 11, 2020, file photo, Kentucky Gov. Andy Beshear puts on a face mask after speaking to reporters at the Capitol in Frankfort, Ky. Kentucky's governor said Sunday, Oct. 11, 2020, that he will quarantine after a member of his security detail who drove with his family the day before later tested positive for COVID-19. Democratic Gov. Andy Beshear said he and his family feel fine, show no coronavirus symptoms and have tested negative for the virus. (Ryan C. Hermens/Lexington Herald-Leader via AP, File)

FRANKFORT, Ky. (AP) — Kentucky lawmakers preparing for an action-packed session next year will have some basic operational challenges to overcome because of the COVID-19 pandemic, top legislators said Friday.

Passing another state budget in lean fiscal times and assisting a pandemic-battered economy loom as leading issues when the legislature — widely expected to remain in Republican control after next week's election — convenes in January for a 30-day session.

Friction could be ratcheted up between GOP lawmakers and Democratic Gov. Andy Beshear over mandates and restrictions on economic activity and the extent of his executive powers, with Kentucky now being hit by its worst outbreak since the pandemic began.

The rising numbers also raise a more practical question at the Capitol — how the General Assembly will function with an ongoing pandemic as the world awaits development and distribution of a vaccine.

“This COVID situation may limit us in what we can or cannot do," Senate President Robert Stivers said. “So the process may be a bigger story than the policy that we deal with.”

That leads to a fundamental matter, he said: “We're going to have to figure out how we live with this. Do we want to refine the powers of the governor? Do we want to establish certain things to keep businesses up and running?"

Technology experts have been working on ways to enable House members to cast votes without everyone being in the chamber at the same time, House Speaker David Osborne said. And the House is seeking input from scientists and health professionals on the “best practices” to try to keep people safe, he said.

Questions include how lawmakers will be able to thoroughly debate issues, said Rep. Joni Jenkins, the top-ranking House Democrat. Social distancing is a challenge in the 100-member chamber.

“We don’t know what January, February and March will look like COVID-wise, but it looks very possible that there will not 100 members at any given time on the floor of the House,” Jenkins said.

Lawmakers made special accommodations late in the 2020 session in response to the virus.

The 2021 session preview came as legislative leaders spoke during the Kentucky Association of Counties' annual conference, which was held virtually.

Osborne said the 30-day session will be “cram-packed full of action.”

Passing another one-year state budget will be the top priority. Kentucky lawmakers traditionally pass a two-year budget, but the health crisis — and revenue uncertainties it created — led them to opt for a one-year spending plan earlier this year.

Stivers warned that a 10% reduction in state revenues is “very foreseeable." Osborne acknowledged the outlook is “somewhat grim” for the next budget, which would take effect on July 1, 2021.

“If we aren’t generating sales tax -- people aren’t buying, people aren’t working, businesses aren’t employing, we’re not churning money through the system -- then we’re going to have a hard time doing anything,” the Senate leader said.

Lawmakers passed an austere budget this year, Osborne said, which means “there’s not a lot of room for cuts that are easy to find. So it’s going to be a painful process.”

A priority will be helping rejuvenate the economy and boost employment, Stivers said.

Osborne listed another virus-related issue as a priority: granting liability protections for businesses, schools and others to shield them from pandemic-related lawsuits.

“For those people that are doing everything that they can to comply with best practices, we want to make sure that they are protected," he said. “Certainly we don’t want to protect willful negligence."

Osborne also said the governor's executive power authority also could be reviewed. Any governor needs some latitude to respond to emergencies, he said, but added: “Certainly the emergency powers as written never contemplated a long-term shutdown like this.”

Beshear issued a series of executive orders to try to stop the virus' spread, including a mandate that most people wear masks in public. Those orders drew a legal challenge, and the Kentucky Supreme Court is reviewing the case.

For House Democrats, priorities include changes to the criminal-justice system, Jenkins said.

Democratic state Rep. Attica Scott is among lawmakers pushing for a bill that would ban no-knock search warrants in Kentucky and impose new requirements on police practices. Her measure would be known as “Breonna’s Law” in honor of Breonna Taylor, the Black woman killed during a police raid at her Louisville apartment in March.