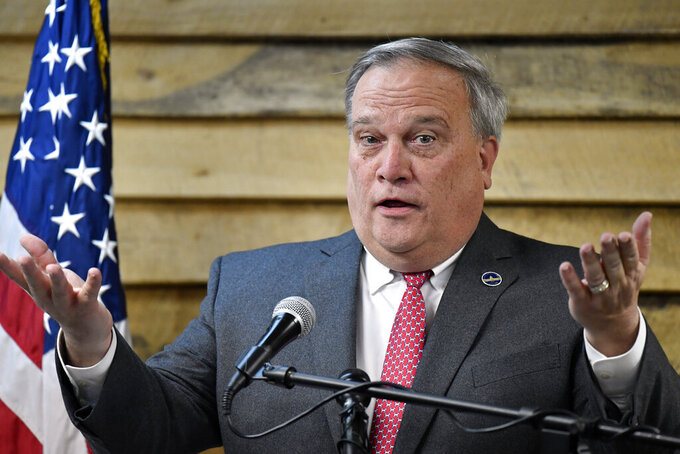 The House passed the “continuation” budgets seen as mere placeholders for House and Senate conferees who eventually will craft detailed spending plans. The series of House votes came after the bills cleared a House committee earlier in the day. The measures now go to the Senate.

The strategy reflects the time constraints for lawmakers to pass a one-year budget in a 30-day session already in its sixth day Monday.

“I would caution everybody to read absolutely nothing into the budget that comes out first," House Speaker David Osborne said last week on Kentucky Educational Television. “It will absolutely just be a continuation version of the budget that is just an effort to expedite things.”

Senate President Robert Stivers said last week that the initial version "will not be anything close to what I think the final budget will be.”

In another development, the House budget committee didn’t take up a spending bill reflecting Democratic Gov. Andy Beshear’s proposal to pump immediate aid into parts of a state economy still struggling under the pandemic. Committee Chairman Jason Petrie cited an unspecified technical issue as the reason for bypassing the measure Monday.

“This is something we should all be for,” the governor said Monday in making another pitch for the quick relief.

“There's no reason that it shouldn't be done and it should be done now,” Beshear added at a news conference.

Lawmakers traditionally pass two-year state budgets during 60-day sessions in even-numbered years. They broke with tradition last year, passing a one-year budget because of economic uncertainties caused by the pandemic. That means lawmakers need to pass another one-year budget in this year's short session for the fiscal year beginning July 1.

The GOP-led House on Monday passed the continuation budget bills for the executive, judicial and legislative branches, as well as the transportation budget.

Democratic Rep. Angie Hatton made a pitch for the targeted COVID relief sought by Beshear.

“I know this is not going to be the final version of our budget," she said at the committee meeting Monday. "I’m praying that we can put a lot more of the ... things that small businesses, non-profits and unemployment claimants need from this budget.”

The plan is to get the continuation plans into a conference committee, where key lawmakers will delve deeper into spending needs and eventually craft a version of the budget that will be presented to the House and Senate.

“Everybody is pulling in the same direction trying to get to the meat of the process," Petrie said.

Those priorities echoed themes that helped him win the governor's office in 2019. However, Republican lawmakers, with veto-proof majorities that grew in the 2020 election, will reshape the budget to their liking. Top Republicans have urged a cautious approach, noting that much of the turnaround in the state's financial situation is due to a massive influx of federal COVID relief.