Kentucky, Vanderbilt look to turn things around in SEC clash 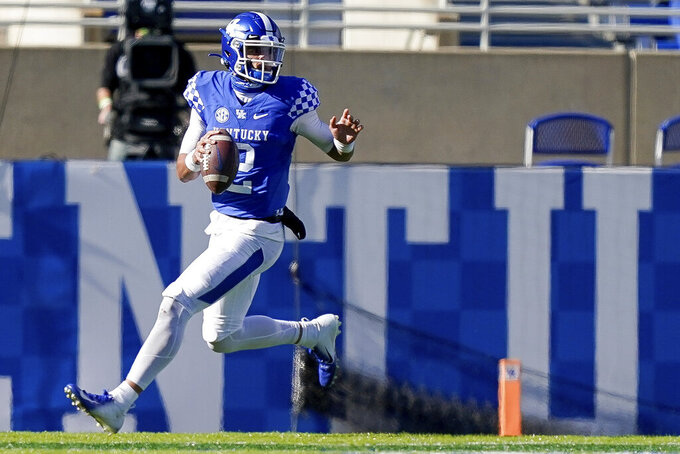 Kentucky quarterback Joey Gatewood (2) scrambles with the ball during the second half of an NCAA college football game against Georgia, Saturday, Oct. 31, 2020, in Lexington, Ky. (AP Photo/Bryan Woolston) 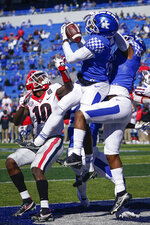 Kentucky welcomed its bye week after six grueling games, a stretch during which the Wildcats experienced more valleys than peaks.

Now the rested Wildcats (2-4 Southeastern Conference) seek to bounce back from a two-game skid Saturday against winless Vanderbilt (0-5). Kentucky has won six of seven against the Commodores but are mindful not to underestimate a squad that needs a win as much as the Wildcats do.

“We need to worry about ourselves and focus on ourselves,” Kentucky coach Mark Stoops said this week. “Our guys need to continue to focus on ourselves, our energy, our focus, our preparation throughout this week in getting ready to play. That’s what I’m concerned about.”

The Wildcats have concerns on both sides of the ball but the biggest is jump-starting an offense that has been outscored 34-17 and generated just 374 yards the past two games. Quarterbacks coach/co-offensive coordinator Darin Hinshaw said the bye was spent trying to re-establish the balance that kept defenses guessing during a two-game winning streak before the recent struggles.

“We fell away from that and we’re getting back to that right now,’’ Hinshaw added.

Kentucky might regain some familiarity with senior quarterback Terry Wilson recovered from a wrist injury that kept him out of a 14-3 loss to then-No. 5 Georgia. He and Joey Gatewood, who played against the Bulldogs, are listed as OR choices on the depth chart.

Kentucky is also in mourning after the program announced Thursday that offensive line coach John Schlarman, 45, had died after a two-year battle with cancer.

Tough as it’s been for the visiting Commodores during a disrupted season, they believe a breakthrough is close after nearly rallying from a 17-point halftime hole in a 24-17 loss at Mississippi State.

Vanderbilt’s 478 yards of offense were more than double the Bulldogs’ total. But three interceptions by freshman quarterback Ken Seals among five turnovers hurt, including one of each during the comeback attempt. Coach Derek Mason said that can’t happen against Kentucky’s opportunistic defense.

“He’s just got to continue to understand that situational ball,” Mason said of Seals. “If you don’t like what you see, throw it away. ... You can’t score points if you don’t have the football.”

Some other things to watch as Vanderbilt visits Kentucky:

Stoops said this week that COVID-19 has been an issue with his team. He wasn’t specific but added, “it’s not out of control” and hopes it stays that way. The coach acknowledged that three offensive coaches have been out, though he wouldn’t specify why and cited privacy regulations. Kentucky was awaiting results from Thursday testing, which comes amid an outbreak this week throughout the SEC and resulted in four games being cancelled this weekend.

“Things change rapidly, as you know,” Stoops said. “But at this point in time, we are good to go and looking forward to playing again.”

Vanderbilt has been healing up with players recovering from injuries and clearing COVID-19 testing and tracing issues. The Commodores held Mississippi State to minus-22 yards rushing last week, a school record. The Commodores also are averaging 1.2 turnovers gained per game. Defensive end Dayo Odeyingbo leads Vandy with five tackles for loss and 3½ sacks.

Vanderbilt is starting to click with new offensive coordinator Todd Fitch and freshman quarterback Ken Seals. The Commodores are averaging 449.5 yards of total offense over the past two games, a big jump from the 256.7 they managed over the first three games this season. Seals just threw for a career-high 336 yards at Mississippi State and wide receiver Cam Johnson has combined for 24 catches for 211 yards in the past two games.

Besides Wilson, Kentucky nose guard Quinton Bohanna is listed as the starter after missing the past two games with a knee injury sustained in the first half at Tennessee. Bohanna had made 23 consecutive starts before the injury.

Kentucky is plus-8 in wins, minus-4 in losses and and among three teams tied for third in the SEC at plus-4. Vanderbilt ranks last at minus-8 and opponents have scored 28 points off takeaways.