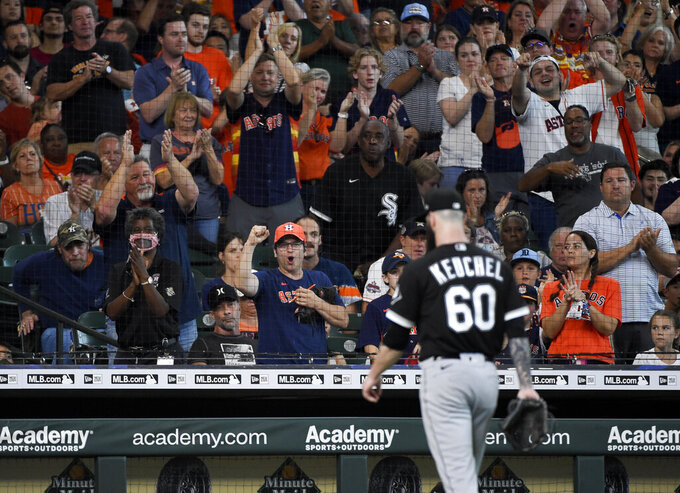 Fans cheer as Chicago White Sox starting pitcher Dallas Keuchel (60) walks to the dugout after being removed from the baseball game during the third inning against the Houston Astros, Sunday, June 20, 2021, in Houston. (AP Photo/Eric Christian Smith)

HOUSTON (AP) — Dallas Keuchel lost in his first appearance against Houston, and Abraham Toro had a career-high four hits to lead the Astros over the Chicago White Sox 8-2 Sunday for their seventh straight win.

Keuchel, a two-time All-Star for the Astros who helped the franchise win its first World Series title in 2017, won the 2015 AL Cy Young Award with Houston. He went 76-63 in seven seasons with the Astros and left after the 2018 season for Atlanta before signing a $55.5 million, three-year contract with Chicago after the 2019 season.

“Not a lot of good, a lot of bad,” Keuchel said of the four-game series. “It’s just one of those four-game series where you face a good team that’s hot, and you’re not really doing anything good on your end, so it was a good old-fashioned butt-whooping.”

He gave up seven hits and four walks, leaving after throwing 41 pitches in the third.

“It was weird,” Keuchel said of returning to Houston. “I had every emotion under the sun going there. I wasn’t making terrible pitches, but at the same time, I wasn’t giving myself any room to breathe. … I just couldn’t really stop the bleeding there in the third, and I wasn’t around the zone as much as I would have liked to from the previous couple outings.”

He was given a video tribute Thursday during the series opener, and the crowd 39,821 gave him a standing ovation when he came out Sunday.

The 33-year-old left-hander had been 5-0 in eight starts since an April 30 defeat to Cleveland.

He hit an RBI infield single in the first and added three more singles before striking out.

“He’s been playing great,” Houston manager Dusty Baker said. “I think it helped him to go down there and play every day, find his stroke, find his confidence. He’s given us all that we needed.”

Lance McCullers Jr. (4-1) gave up two runs and two hits in six innings and Carlos Correa homered for the Astros, on their longest winning streak since taking eight in a row from last Aug. 12-20.

“I think we’ve been playing good,” McCullers said. “Everything has started to come along. We had to run through a lot of tough teams here, especially in this first half of the season. I thought our guys have played extremely well. You just have to continue winning ballgames.”

McCullers won his third straight decision and has allowed three runs or fewer in each of his last eight starts.

“I felt like my velocity was there,” McCullers said. “The breaking stuff was there, the changeups. … This is really the first time in about a month that I was able to go out there freely and throw my breaking stuff.”

Jake Lamb’s two-run homer put the White Sox ahead in the second, but Houston took a 6-2 lead in the third, when Yordan Álvarez hit a two-run single, Taylor Jones had an RBI double, Keuchel walked José Altuve with the bases loaded and reliever Matt Foster walked Chas McCormick with the bases full.

Correa homered leading off the fourth, and Michael Brantley had an RBI single in the fifth.

Astros: OF Kyle Tucker, who is on the injured list due to health and safety protocols, said he did not have COVID-19, but he was working to get his strength back following an illness. Baker said Saturday that Tucker probably wouldn’t be activated until Monday.

White Sox: RHP Lucas Giolito (5-5, 3.86 ERA) is scheduled to make his 15th start of the season on Tuesday when Chicago travels to Pittsburgh for a two-game series. Giolito is 4-7 with a 5.49 ERA in 14 interleague starts.

Astros: RHP Jake Odorizzi (1-3, 5.68) will start Monday in the opener of a three-game series at Baltimore. Odorizzi threw four scoreless innings on Tuesday in relief against the Rangers and has allowed three runs or fewer in each of his last five appearances.