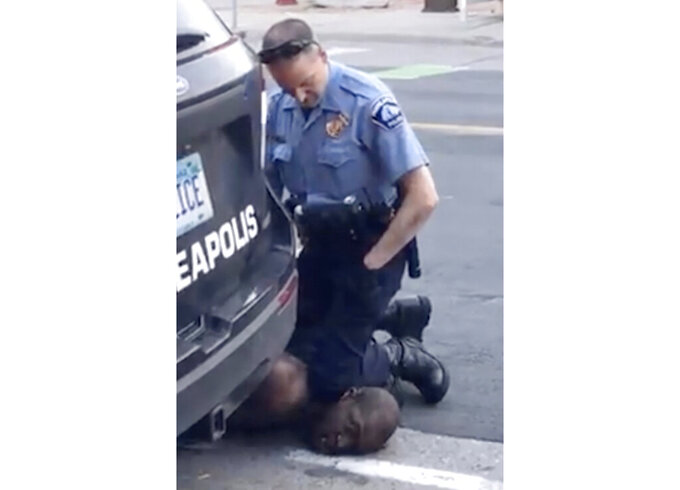 FILE - In this Monday, May 25, 2020, file frame from video provided by Darnella Frazier, then-Minneapolis Police Officer Derek Chauvin kneels on the neck of George Floyd, a handcuffed man who was pleading that he could not breathe. As the trial approaches for Chauvin, who is charged with murder in Floyd's death, prosecutors are putting the time Chauvin's knee was on Floyd's neck at about nine minutes. The time has fluctuated before. (Darnella Frazier via AP, File) 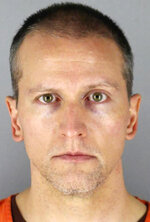 MINNEAPOLIS (AP) — A timeline of key events that began with George Floyd's arrest on May 25, 2020, by four police officers in Minneapolis:

May 25 — Minneapolis police officers respond to a call shortly after 8 p.m. about a possible forgery at a corner grocery and encounter a Black man later identified as George Floyd, who struggles and ends up handcuffed and face-down in the street. Officer Derek Chauvin uses his knee to pin Floyd's neck for about nine minutes while bystanders shout at him to stop. Bystander video shows Floyd crying “I can't breathe” multiple times before going limp. He's pronounced dead at a hospital.

May 26 — Police issue a statement saying Floyd died after a “medical incident,” and that he physically resisted and appeared to be in medical distress. Minutes later, bystander video is posted online. Police release another statement saying the FBI will help investigate. Chauvin and three other officers — Thomas Lane, J. Kueng and Tou Thao — are fired. Protests begin.

May 27 — Mayor Jacob Frey calls for criminal charges against Chauvin. Protests lead to unrest in Minneapolis, with some people looting and starting fires. Protests spread to other cities.

May 28 — Gov. Tim Walz activates the Minnesota National Guard. That night, police abandon the 3rd Precinct station as protesters overtake it and set it on fire.

May 29 — Chauvin is arrested and charged with third-degree murder and manslaughter. President Donald Trump tweets about “thugs” in Minneapolis protests and warns: “When the looting starts, the shooting starts.” Protests turn violent again in Minneapolis and some other cities.

May 30 — Trump tries to walk back his tweet. Protests continue around the country and sometimes turn violent.

June 1 — The county medical examiner finds that Floyd's heart stopped as police restrained him and compressed his neck, noting Floyd had underlying health issue and listing fentanyl and methamphetamine use as “other significant conditions."

June 3 — Ellison files a tougher second-degree murder charge against Chauvin and charges the other three officers who were involved in Floyd's arrest.

June 4 — The first of multiple funeral services for Floyd is held in Minneapolis.

June 5 — Minneapolis bans chokeholds by police, the first of many changes to be announced in coming months, including an overhaul of the police department's use-of-force policy.

June 8 — Thousands pay their respects to Floyd in Houston, where he grew up. He's buried the next day.

June 16 — Trump signs an executive order to encourage better police practices and establish a database to track officers with a history of excessive use-of-force complaints.

March 8 — Jury selection is scheduled to begin in Chauvin's trial.