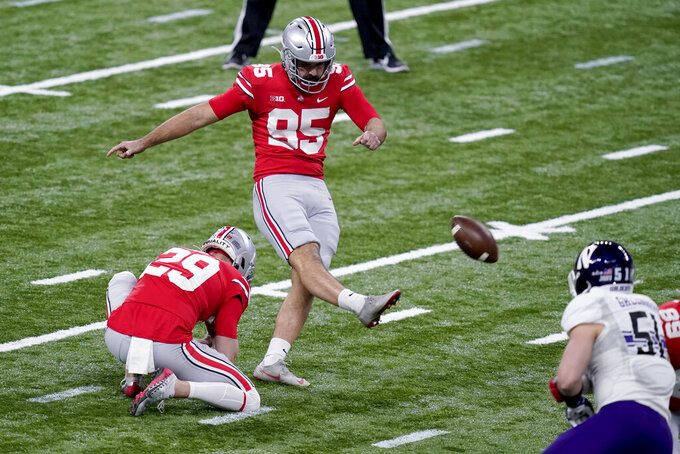 Ohio State released its status report for the title game an hour before kickoff.

The school does not specify why any of the 13 players on the list cannot play, but Buckeyes coach Ryan Day did acknowledge last week that Ohio State was dealing with some new COVID-19 cases.

Haubeil posted on his Instagram page that he did not make the trip to Florida after testing positive. The senior was 5 for 7 on field-goal attempts this season and handled kickoffs. Junior Dominic DiMaccio was 1 for 2 on field goals and 3 for 3 on extra points this season. Freshman Jake Seibert missed his only field goal attempt and made all 13 PATs.

“I'm extremely upset but at the same time I'm overwhelming thankful to be an individual who is asymptomatic,” Haueil said in his post. “I have spent the past 4 months making sacrifices, and have not seen family and friends one single time. So, to say I'm (angry) is a complete understatement. I didn't go out and do something I knew I wasn't supposed to be doing and then wake up with a positive test.”

Togiai and Smith both played well in the Sugar Bowl semifinal victory against Clemson, when the Buckeyes got good pressure on quarterback Trevor Lawrence and shut down the Tigers' running game.

Smith had a sack and Togiai made four tackles. Without Togiai at nose tackle, Jerron Cage and Ty Hamilton could see more playing time.

The Buckeyes will get back defensive ends Zach Harrison and Tyler Friday after they missed the semifinals, which can help compensate for the loss of Smith.

Ohio State also will have second-leading rusher Master Teague available after he missed the Clemson game.

Running back Miyan Williams, who had some significant runs against Clemson, also was listed as unavailable after tweeting on Saturday that he didn't make the trip to Miami.