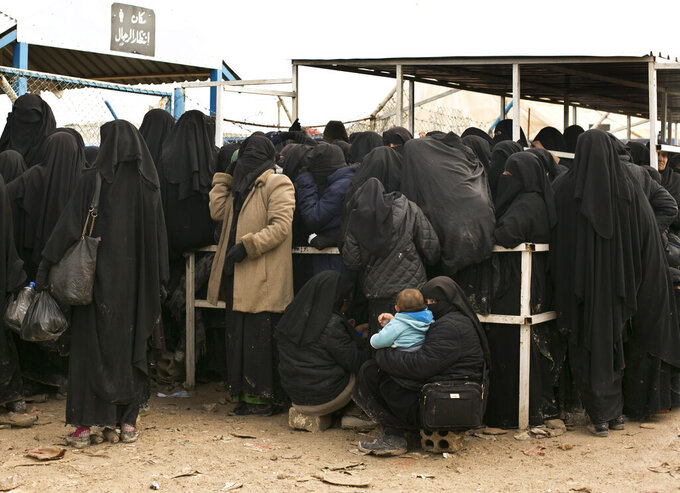 FILE - In this March 31, 2019 file, photo, women residents from former Islamic State-held areas in Syria line up for aid supplies at Al-Hol camp in Hassakeh province, Syria. Killings have surged inside the camp with at least 20 men and women killed in January, 2021. They are believed to be the victims of IS militants trying to enforce their power inside the camp housing 62,000 people, mostly women and children. (AP Photo/Maya Alleruzzo, File)

BEIRUT (AP) — The deaths stacked up: a policeman shot dead with a pistol equipped with a silencer, a local official gunned down, his son wounded, an Iraqi man beheaded. In total, 20 men and women were killed last month in the sprawling camp in northeastern Syria housing families of the Islamic State group.

The slayings in al-Hol camp — nearly triple the deaths in previous months — are largely believed to have been carried out by IS militants punishing perceived enemies and intimidating anyone who wavers from their extremist line, say Syrian Kurdish officials who run the camp but say they struggle to keep it under control.

The jump in violence has heightened calls for countries to repatriate their citizens languishing in the camp, home to some 62,000 people. Those repatriations have slowed dramatically because of the coronavirus epidemic, officials say. If left there, the thousands of children in the camp risk being radicalized, local and U.N. officials warn.

“Al-Hol will be the womb that will give birth to new generations of extremists,” said Abdullah Suleiman Ali, a Syrian researcher who focuses on jihadi groups.

It has been nearly two years since the U.S.-led coalition captured the last sliver of territory held by the Islamic State group, ending their self-declared caliphate that covered large parts of Iraq and Syria. The brutal war took several years and left U.S.-allied Kurdish authorities in control of eastern and northeast Syria, with a small presence of several hundred American forces still deployed there.

Since then, remaining IS militants have gone underground in the Syrian-Iraqi border region, continuing an insurgency. Though attacks in Syria are lower than they were in late 2019, IS sleeper cells continue to strike Syrian government troops, forces of the Kurdish-led Syrian Democratic Forces and civilian administrators.

Al-Hol houses the wives, widows, children and other family members of IS militants — more than 80% of its 62,000 residents are women and children. The majority are Iraqis and Syrians, but it includes some 10,000 people from 57 other countries, housed in a highly secured separate area known as the Annex. Many of them remain die-hard IS supporters.

The camp has long been chaotic, with the hardcore militants among its population enforcing their will on others and seeking to prevent them from cooperating with Kurdish authorities guarding it.

IS cells in Syria are in contact with residents of the camp and support them, said a senior Kurdish official Badran Cia Kurd. “Anyone who tries to reveal these contacts or stops dealing with Daesh is subjected to death,” he said, using the Arabic acronym for IS.

The U.S.-backed SDF tweeted last week that, backed by air surveillance from the coalition, they detained an IS family smuggler in the area of Hadadia near the camp.

“There are several reasons behind the increase of crime including attempts by Daesh members to impose their ideology in the camp against civilians who reject it,” said Ali, the researcher.

Of the 20 killings at al-Hol in January, at least five of the dead were female residents of the camp, according to the Rojava Information Center, an activist collective that tracks news in areas controlled by the SDF. All the victims were Syrian or Iraqi citizens, including a member of the local police force, and most were killed in their tents or shelters at night, RIC said.

Most of the victims were shot in the back of their heads at close range, according to RIC and the Syrian Observatory for Human Rights, a Britain-based opposition war monitor.

On Jan. 9, a gunman killed a policeman in the camp using a silencer-equipped pistol, then as other police chased him, he threw a hand grenade that seriously wounded the patrol commander, the Observatory said. The same day, an official with a local council dealing with Syrian civilians in the camp was shot to death and his son critically wounded.

In another case, an Iraqi camp resident was decapitated, his head found some distance from his body, RIC reported. It is believed he was killed on suspicion he was cooperating with authorities.

Kurdish security officials did not respond for questions from The Associated Press about the situation.

The immediate cause for the jump in killings was not known. In November, Kurdish authorities began an amnesty program for the 25,000 Syrian citizens in the camp, allowing them to leave. Some speculate that, since those taking amnesty must register and work with authorities, the program may have prompted slayings to keep residents in line. Many Syrians fear leaving the camp because they may face revenge attacks in their hometowns from those who suffered under IS rule.

Whatever the cause, the bloodshed points to the IS strength within the camp. The local civilian Kurdish authority known as the Autonomous Administration of North and East Syria warned in late January that some sides are trying to revive IS and the authority cannot face this crisis on its own.

IS supporters in the camp carry out trials against residents suspected of opposing them and kill defendants, and authorities have uncovered several IS cells inside, it said. “Contacts are ongoing between the camp and Daesh commanders outside who direct their members inside,” it said.

Some 27,000 non-Syrian children are stranded in al-Hol, including some 19,000 Iraqi children and 8,000 from other countries. On Jan. 30, U.N. counterterrorism chief Vladimir Voronkov urged home countries to repatriate the children, warning that they are at risk of radicalization.

The coronavirus pandemic has brought a drop in the already slow process of repatriation. Many countries have been reluctant to bring back their citizens, though France repatriated seven children in January and Britain one child in September.

Iraq has taken back very few. Repatriation by other countries dropped in 2020 to only 200 children, from 685 in 2019, according to Save the Children.

“These new figures show that before the outbreak of the virus, things were finally starting to move in the right direction,” said Save the Children’s Syria Response Director Sonia Khush.