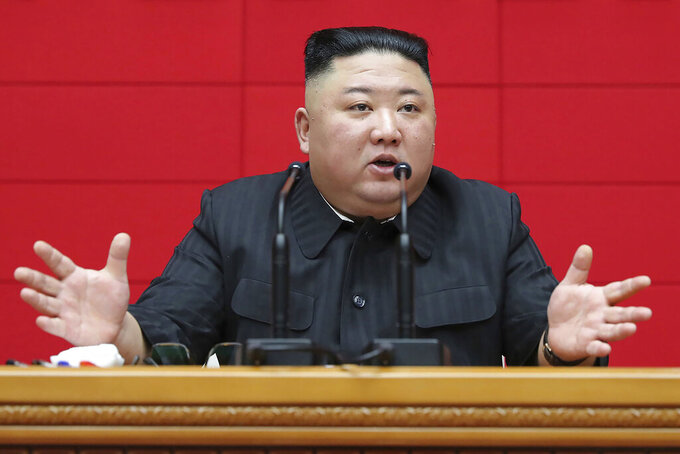 FILE - In this March 4, 2021, file photo provided by the North Korean government, North Korean leader Kim Jong Un delivers a speech during a workshop of chief secretaries of city and county committees of the ruling Workers' Party in Pyongyang, North Korea. State media say Kim vowed to launch an “uncompromising struggle” against anti-socialist elements and build a perfect self-supporting economy. Kim's comments released Thursday, May 27, 2021 come as he seeks greater internal strength to overcome pandemic-related difficulties and U.S.-led sanctions. Independent journalists were not given access to cover the event depicted in this image distributed by the North Korean government. The content of this image is as provided and cannot be independently verified. (Korean Central News Agency/Korea News Service via AP, File)

The comments by Kim, the third member of his family to rule the impoverished nuclear-armed country, come as doubts increase about both North Korea's economy and whether it will engage in serious disarmament talks with Washington. There are also worries that the North is continuing to build a strengthened atomic arsenal that directly threatens the United States.

The Biden administration, which took over after dramatic, but ultimately unsuccessful, direct diplomacy between Kim and former President Donald Trump, has described its recent North Korea policy review as “calibrated and practical.”

But some experts say Washington won't relax sanctions — a step North Korea badly wants — until the North first takes denuclearization steps. That may be growing increasingly unlikely because Kim is seen by many outside analysts as viewing his weapons as his government's only guarantee of survival.

In a letter to participants at a meeting this week of labor organizations, Kim said “the struggle against the anti-socialist and non-socialist practices is a do-or-die battle to defend the working-class purity and lifeline of our style of socialism,” the official Korean Central News Agency reported.

“Anti-socialist and non-socialist practices” likely refer to citizens pursuing capitalism, perceived selfishness and other things that Kim sees as running counter to socialism and collectivism and posing a threat to his family’s rule.

KCNA quoted Kim as saying it’s important to “wage (an) uncompromising struggle against (the anti-socialist and non-socialist practices) and resolutely smash them.”

Kim also ordered participants to “firmly maintain the principle of producing everything needed for economic construction and people’s living with our own raw and other materials.”

Kim, who took power in late 2011, has said his country faces “the worst-ever” situation because of sharply reduced trade caused by coronavirus-caused border closings, the U.S.-led sanctions and natural disasters last summer. He has called for stronger unity at home and urged the United States to abandon hostility against North Korea, an apparent reference to the sanctions. He warned he would enlarge his nuclear arsenal if U.S. hostility persists.

In March, Kim ordered his country’s first short-range ballistic missile tests in a year. But he still maintains a moratorium on long-range missile and nuclear tests, which would pose a direct threat to the U.S. homeland, as President Joe Biden’s government shapes a new U.S. policy on North Korea.

During a summit between Biden and South Korean President Moon Jae-in last week, the two leaders said in a joint statement that the Biden administration’s North Korea policy review “takes a calibrated and practical approach that is open to and will explore diplomacy" with North Korea. The two also emphasized their shared commitment to “the complete denuclearization of the Korean Peninsula.”

Biden announced the appointment of a new special envoy on North Korea affairs, and Moon expressed his hopes that North Korea would respond positively.

But details of Biden’s North Korea policy haven’t been publicly disclosed, and it’s unclear if his administration has contacted North Korea to explain the policy. North Korea, for its part, has remained silent about the Biden-Moon summit and the U.S. policy review.

“As there is little chance for Kim to get sanctions relief within this year, he would view boosting his internal control as more important because he would think his grip on power might be shaken at a time when he’s facing other domestic difficulties,” said Nam Sung-Wook, a professor at Korea University who served as president of the Institute for National Security Strategy, a think tank affiliated with South Korea’s main spy agency.

Since the North Korean nuclear crisis first flared in the early 1990s, the United States and other regional powers have used diplomacy, sanctions and pressure to try to curb its nuclear ambitions. Nothing has worked, and, according to South Korean estimates in 2018, North Korea might have up to 60 nuclear weapons.

In 2018-2019, Kim's summits with Trump ultimately collapsed after Trump rebuffed the North's demand for major sanctions relief in return for partial steps toward denuclearization.

Nam said it would be “natural” for North Korea to push to build more nuclear weapons and fissile material if a stalemate in nuclear diplomacy is prolonged. He said Kim may launch a provocative missile test to draw U.S. attention around August, when the U.S. and South Korean militaries conduct annual major drills.

“North Korea will opt for talks if it determines it cannot endure further” economic difficulties, said Park Won Gon, a professor of North Korea studies at Seoul’s Ewha Womans University. “North Korea has so far endured very well, as no serious (internal) problem has been reported, though it's been more than a year since it closed its borders. ... But I think they can only endure until the end of this year."