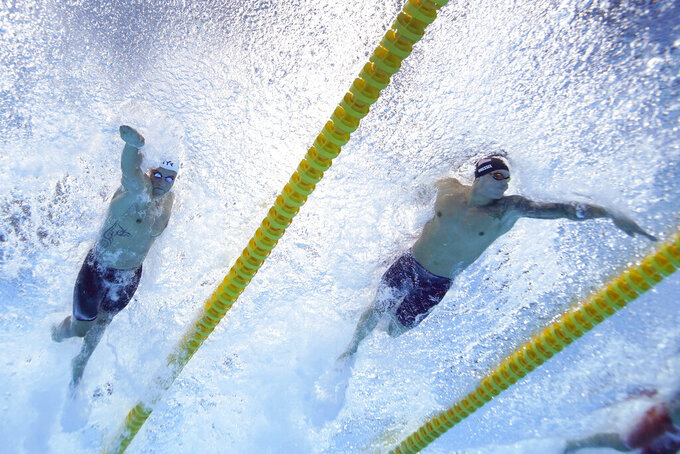 Caeleb Dressel, of the United States, right, swims to win the gold medal in the men's 50-meter freestyle final followed by Florent Manaudou, of France, for silver at the 2020 Summer Olympics, Sunday, Aug. 1, 2021, in Tokyo, Japan. (AP Photo/Jeff Roberson)

TOKYO (AP) — There was no joy in the process for Caeleb Dressel.

Sleepless nights. Hardly any appetite. A virtual cocoon of an Olympics, cut off from his wife, family and friends back in Florida.

Yet, in the end, it was totally worth it.

Arriving in Tokyo as one of the games' most-hyped athletes, Dressel met the moment with one scintillating performance after another.

By the time he was done Sunday, the 24-year-old had piled up five gold medals — one for every race he had a chance in — to claim his place on swimming's Mount Rushmore.

Only four other swimmers had captured five golds at a single Olympics: Michael Phelps (who did it three times), Mark Spitz, Kirstin Otto and Matt Biondi.

Dressel capped his Games with a dominant victory in the 50-meter freestyle and a dazzling butterfly leg on the U.S. team that broke a 12-year-old world record to capture gold in the 4x100 medley relay.

Dressel reveled in the triumph, but he also revealed the grim toll it took on him.

“I’m really glad to be done,” he said. “It’s not an easy week at all. I guess some parts were extremely enjoyable. I would say the majority of them were not.”

Dressel gave little hint of the anguish behind the scenes.

When it's time to race, his look is always one of steely determination, a cold-blooded desire to touch the wall first no matter how bad it hurts.

He undoubtedly psyches out some opponents before he ever dives in the pool, an imposing figure with a massive sleeve of a tattoo that starts atop his left shoulder and winds all the way down to the wrist, basically enveloping his entire arm.

There are images of an American flag, orange blossoms, oranges, magnolias, a bald eagle, a bear, an alligator — essentially, a tribute in ink to his home state.

“I’m really good at hiding my emotions,” Dressel said. “I can put a pretty good show on before each race, but once I shut it off, it just floods out.”

Indeed, there is a sensitive side that few ever see. Dressel passed what little free time he had by journaling about his Tokyo experiences. The tears flowed freely when no one was looking.

The grind of swimming six events in a little over a week, not to mention the stress of living up to all that was expected of him, pushed Dressel to his breaking point.

No one could have envisioned what Dressel was going through when they saw the way he dominated in the pool.

His brilliant technique off the dive, a porpoise-like wiggling that was only visible to cameras beneath the surface, ensured he had the lead as soon as his head popped out of the water.

The only individual race that was ever in doubt was the 100 freestyle, which Dressel led all the way but had to work hard to hold off defending Olympic champion Kyle Chalmers by six-hundreds of a second.

In the 100 butterfly, Dressel broke his own world record and held off Hungarian star Kristof Milak, winner of the 200 fly, by a relatively comfortable 0.23 seconds.

The 50 free was about the biggest rout imaginable in a race that is simply a furious, breath-free sprint from one end of the pool to the other. Usually decided by a few hundredths of a second, Dressel finished about a half-body length ahead of France's Florent Manaudou.

The margin of victory — 0.48 seconds — was the largest in Olympic history for either the men's or women's 50 free. Demonstrating what a blowout that was for such a short race, the gap between the other seven swimmers in the race was just 0.24.

His final race showed similar dominance. Swimming the butterfly on the third leg, Dressel took over with the Americans trailing both Britain and Italy. He quickly surged to the lead with a time more than a second faster than anyone else, giving Zach Apple some breathing room to close things out on the freestyle leg.

U.S. men's coach Dave Durden said Dressel's nail-biting victory in the 100 free — the first individual gold of his career — “just freed him up to swim the way that we know he can swim.”

“It’s hard," Durden said, “and then once you do it, it’s just like a deep exhale and then he can go after it.”

The only gold Dressel didn't win came in a race he never had a chance in.

The Americans went with a different lineup than everyone else in the 4x100 mixed medley relay, a new Olympic event that features two men and two women swimming in any order.

While every other finalist used a woman on the anchor freestyle leg, the U.S. coaches went with Dressel. They knew he'd be behind at the final changeover, but never expected him to dive in more that 8 seconds off the lead.

That was far too much for even a swimmer of Dressel's talents, though he did pass three swimmers to pull the Americans from last to fifth.

Unlike Phelps, who was never afraid of the spotlight and always quick to cash in on his enormous Olympic accomplishments, Dressel just wanted to get back to the Sunshine State as soon as possible.

He didn't have much contact with his wife or anyone else during an Olympics that was delayed a year by the coronavirus pandemic. It was extremely draining just to Facetime or talk on the phone. He had no energy to give beyond the pool.

“It’s not the most enjoyable process, but it is worth it. Every part of it is worth it," he said. “Just because it’s bad doesn’t mean it’s not worth it.”