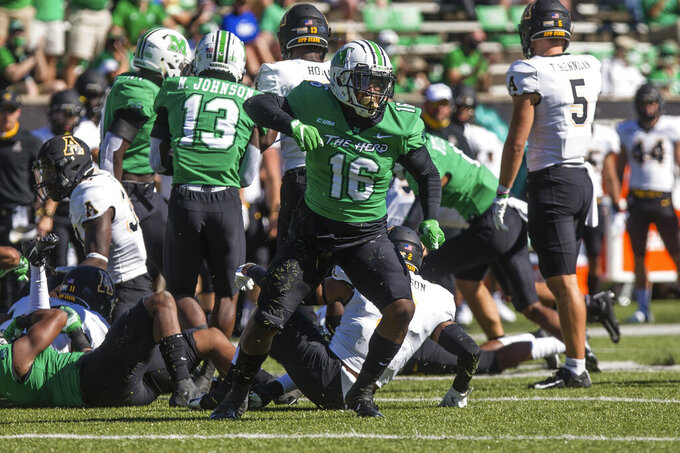 HUNTINGTON, W.Va. (AP) — Marshall coach Doc Holliday and his young quarterback saw the two injured Appalachian State players on the ground after a collision. So they knew what to do next.

Holliday called for redshirt freshman Grant Wells to run toward the side of safety Ryan Huff's replacement.

Wells scored on a 12-yard run late in the third quarter, Marshall's defense came up with stop after stop and the Thundering Herd beat No. 23 Appalachian State 17-7 on Saturday.

Appalachian State (1-1) squandered a couple of late opportunities and was held scoreless in the second half.

“For our program, it’s huge,” Holliday said. “I thought our guys accepted that challenge. I thought the defensive play was special.”

Wells had a lackluster game but put together consecutive big plays that made the difference late in the third quarter. He threw a 67-yard pass down the middle to a wide open Xavier Gaines to the Appalachian State 12. Huff and Mountaineers cornerback Shaun Jolly were shaken up on the tackle.

Holliday told Wells to keep the ball on the next play, and Wells trotted into the end zone untouched.

“We called that play knowing they had a new safety in the game," Holliday said.

Wells finished 11 of 25 for 163 yards after throwing four TD passes in his debut two weeks ago, a 59-0 win over Eastern Kentucky.

“He's a mature guy for as young as he is,” Holliday said. “Nothing rattles him. He just goes in and plays, made some tremendous, tremendous throws. I'm just so proud of him. It's easy for him to an extent because he's surrounded by veteran players that provide him with a lot of leadership and confidence.”

Appalachian State lost a chance to close the gap early in the fourth. Quarterback Zac Thomas combined with Mike Evans on a 41-yard pass play. But as Evans was heading toward the end zone, Marshall’s Brandon Drayton punched the ball loose and teammate Nazeeh Johnson recovered for a touchback.

“That’s a big momentum swing," Appalachian State coach Shawn Clark said. "If we score a touchdown, we’re down three and we’ve got the momentum on our side. You go from having the momentum on your side to, ‘Here we go, another turnover.’ We have to get that corrected in a hurry.”

Brenden Knox rushed for 138 yards and a touchdown for Marshall. Knox got the edge over Thomas in a matchup between two preseason offensive players of the year in their respective conferences.

"Man, I could cry," Knox said. “This is something you could talk about once you leave here for the rest of your life. Not many people get to do that. Being able to knock off a Top 25 team, that's what people dream about on national TV.”

Appalachian State: The Mountaineers’ rushing attack was limited to 96 yards after piling up 308 yards in a 35-20 win over Charlotte last week.

Marshall: The Thundering Herd defense stymied Appalachian State on its final 10 drives. But Marshall will need to work on its own mistakes after getting penalized 11 times for 117 yards.

Marshall could make its first appearance in the AP Top 25 since finishing the 2014 season at No. 23, while Appalachian State will likely fall out of the rankings.

Charlotte, Appalachian State’s opponent last week, canceled its game Saturday against North Carolina because the 49ers did not have enough available offensive linemen. Charlotte said there have been three positive cases of the coronavirus among football players during the past two weeks.

Hamrick said both Marshall and Appalachian State tested their players for the virus three times this week.

“We were all very comfortable that Appalachian State will have a very safe football team on the field today as will Marshall,” Hamrick said.

Clark attended high school in Charleston, West Virginia. He was an offensive guard for Appalachian State in 1995 in a 10-3 win at Marshall when both teams were members of the Southern Conference.

Appalachian State hosts Campbell of the Championship Subdivision next Saturday. The Mountaineers have an Oct. 7 Sun Belt Conference showdown at home against No. 19 Louisiana-Lafayette.

Marshall is scheduled to play at Conference USA rival Western Kentucky on Oct. 10. Rice postponed its Oct. 3 road game at Marshall due to the coronavirus pandemic.