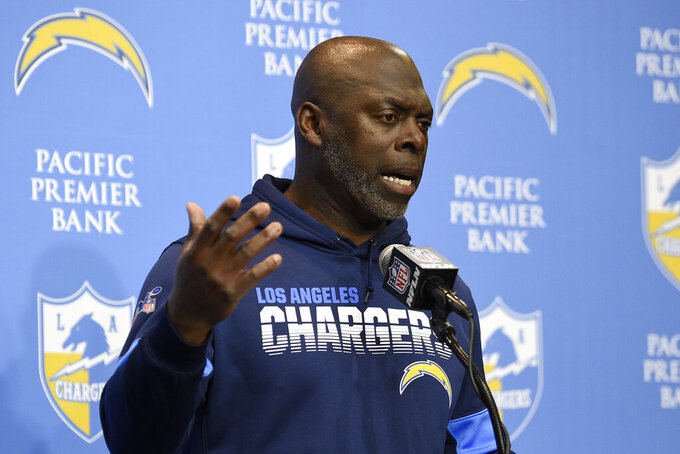 FILE - In this Dec. 15 2019, file photo, Los Angeles Chargers head coach Anthony Lynn speaks after an NFL football game against the Minnesota Vikings, in Carson, Calif. The NFL and the Black College Football Hall of Fame will hold a virtual version of their quarterback coaching summit, a third-year project aimed at improving the league's diversity. Chargers coach Anthony Lynn is among the pro and college coaches planning to participate in the June 22-23 event. (AP Photo/Kelvin Kuo, File)

LOS ANGELES (AP) — It will be lights, cameras, Los Angeles again for “Hard Knocks” but for the first time the show will feature two franchises.

HBO and NFL Films announced Thursday that this year's show will include the Rams and Chargers, which are both moving into SoFI Stadium in Inglewood and will be attempting to bounce back from disappointing seasons. The five-week series will premiere Aug. 11.

Chronicling two teams won't be the only difference. With the coronavirus pandemic having shut down team facilities for most of the offseason, players, coaches and production crews will be going through new protocols to prevent or mitigate any possible infections.

“The protocols, practice schedule, how teams use practice and locker rooms, we’ll have to adjust to that,” said NFL Films' Ken Rodgers, who is the senior coordinating producer of “Hard Knocks.” "When you consider some of the players are going to be meeting their coaches for the first time and then going through the protocols, it is going to be an empathetic process for the audience to watch."

Rodgers said the testing process will be a storyline and that some tests may be shot if approved by the NFL and NFL Players Association. He added that testing results would not dominate the content unless it became news with the amount of positive tests.

Rams coach Sean McVay echoed the sentiments of Baltimore Ravens coach John Harbaugh in wondering how teams might be able to get work done in an era of social distancing.

“There’s such an influx of information that is ever changing. It is a little bit mind-numbing when you get down to it,” he said. “It’s figuring out what is going to be the best way to operate and having the agility to adjust. It’s crazy, we’re talking about some of this stuff and we’re playing football. We’re going to social distance but we play football? This is hard for me to understand this. I don’t get it, I really don’t.”

The two teams wouldn’t have been selected if they had not volunteered. Teams aren’t usually eligible if they have appeared on the show during the past 10 years (the Rams did “Hard Knocks” in 2016, their first year back in LA), or appeared in the playoffs the past two years (both were in the postseason in 2018), or have a first-year coach.

The Rams join the Cincinnati Bengals (2009, ’13) and Dallas Cowboys (2002, ’07) as teams that have done “Hard Knocks” twice while the Chargers are making their first appearance. This will be the 15th season for the show, which started in 2001 with the Ravens. HBO and NFL Films also announced Thursday that they have agreed to renew the series through 2024.

The Chargers and Rams usually hold training camp only six miles (9.7 kilometers) apart from each other, but that will not be the case this season with the NFL mandating that teams have to hold camp at their own facilities. The Rams, who have held camp at UC Irvine the past four seasons, will be at their home base in Thousand Oaks, about 80 miles (128 kilometers) from the Chargers’ facility in Costa Mesa.

Besides moving into a new stadium, Chargers general manager Tom Telesco said the time was right to do “Hard Knocks” because he feels his roster is mature enough to handle the attention that comes with the show.

The Bolts are coming off a 5-11 season after tying for the most wins in the AFC in 2018. The quarterback competition between Tyrod Taylor and first-round pick Justin Herbert is likely to get plenty of coverage after 14 seasons of Philip Rivers under center. The Chargers did not re-sign Rivers, who ended up in Indianapolis.

Coach Anthony Lynn has experience with “Hard Knocks” as an assistant with the Cowboys and New York Jets. The Chargers also are used to cameras following their every move. They have done a “Hard Knocks”-style show the past two seasons that has aired on their television partners in the Los Angeles area.

“We want to make sure it is done the right way and make it a great show. I'm excited for the country to see our players in this light,” Telesco said.

The Rams made the Super Bowl in 2018 but missed the postseason last year with a 9-7 record. They are also going through a little bit of roster churn after moving on from some high-profile veterans, including running back Todd Gurley.

This will be McVay's first experience with “Hard Knocks,” but most of his players have gone through it. Quarterback Jared Goff was a rookie during the team's first appearance four years ago.