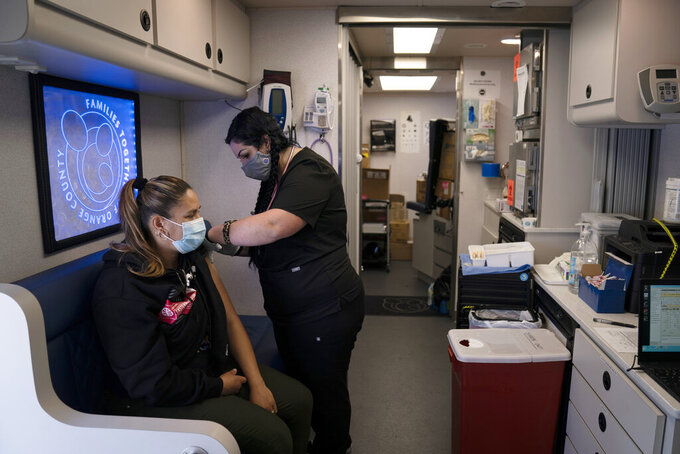 Nurse Natasha Garcia administers a dose of the Moderna COVID-19 vaccine to Monica Villalobos in a mobile clinic set up in the parking lot of a shopping center in Orange, Calif., Thursday, April 29, 2021. The mobile unit, launched in February by Families Together of Orange County, began its service to provide better access to the COVID-19 vaccine within the community and to prevent vaccine hesitation, according to mobile operations manager Parsia Jahanbani. (AP Photo/Jae C. Hong)

LOS ANGELES (AP) — Los Angeles Mayor Eric Garcetti announced Friday that the COVID-19 mass vaccination site at Dodger Stadium will close by the end of May, part of a trend in California to bring doses closer to where people live as appointments in some places go unfilled.

Winding down operations at the stadium marks the transition of the city’s vaccination efforts to appointment-free options as well as putting more doses into walk-up centers and mobile clinics, the mayor said in a statement.

Dodger Stadium became one of the nation’s most prominent sites for coronavirus response, first for testing and then delivery of vaccine doses to people waiting in long lines of cars.

“Dodger Stadium set the standard for sports franchises and community institutions playing a starring role in our COVID-19 response for the country,” Garcetti said.

More than 1 million people were tested at the stadium, and the number of vaccine doses administered there has topped 420,000, according to the city.

Overall, nearly 30 million vaccinations have been administered in California, where the rates of new infections and deaths have plunged far below levels of the winter surge and restrictions on businesses and daily life are easing. Nearly 19 million people of an estimated 32 million who are eligible for vaccine are partially or fully inoculated.

Orange County's big vaccination site at Disneyland was scheduled to close Friday as the theme park reopened to visitors for the first time in more than a year. Similarly, a major site at Six Flags Magic Mountain in northern Los Angeles County recently closed as that park welcomed visitors back.

North of San Francisco, Marin County will close two mass vaccination sites in San Rafael by the end of May. Health officials are shifting vaccinations to mobile units to reach unvaccinated people and offering home visits to people who can’t leave their homes.

“This adjustment is a sign of progress, but our work is not yet done,” said Dr. Matt Willis, the county’s public health officer. “If we can vaccinate another 10 or 15% of residents, it will pay dividends for our community.”

LA County Public Health Director Barbara Ferrer said Thursday that the large-capacity vaccination sites were set up when there was a scarcity of supply.

There are now more than 700 locations in the county where people can be vaccinated. Many of the sites allow people to walk in at their convenience without having to navigate the appointment website and look for locations with available slots.

This week, for the first time, far fewer people were coming into sites across LA County and appointment slots were not being filled, Ferrer said.

Ferrer said officials are monitoring the traffic at the big sites and at some point they may not be the most viable option for trying to get vaccine into hardest-hit communities.

“I think the strategy moving forward for all of us is going to be to make it as easy as possible for people to get vaccinated, and for some that’s going to mean that were going to bring the vaccine close to where you already are,” she said.

At the south end of San Francisco Bay, more than two-thirds of Santa Clara County residents age 16 and up have received at least one dose but officials are concerned about lagging rates among the youngest of those eligible. Efforts to address that include expanded clinics with evening and weekend hours, but county officials do not have plans to shutter larger vaccine sites, in part because a large number of second doses still need to be given out.

“We are making it so easy,” county Supervisor Cindy Chavez told a news conference. “You can drop in. They are making later hours. You don't have to necessarily make an appointment.”