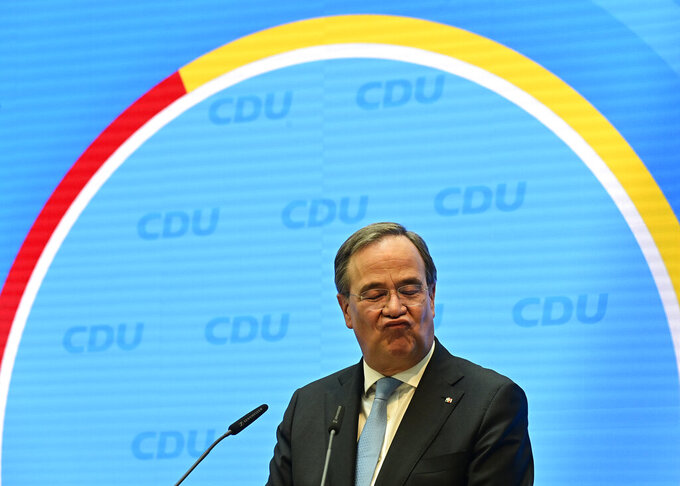 BERLIN (AP) — Armin Laschet, the governor of Germany’s most populous state, emerged victorious Tuesday from a bruising power struggle and became the candidate of Angela Merkel’s center-right bloc to succeed the longtime chancellor in the country's September election.

Their Union bloc was the last major political force to nominate a candidate for chancellor in the Sept. 26 parliamentary election. Merkel isn't seeking a fifth term after nearly 16 years in power.

The race turned into a heated duel after both Laschet, the leader of Merkel’s Christian Democratic Union, and Soeder, who leads its smaller Bavarian sister party, the Christian Social Union, declared their interest in succeeding Merkel.

Soeder conceded after the CDU leadership backed Laschet in a late-night vote, pledging that “we will support him without a grudge, with all our strength."

“What counts, starting now, is which party has the best concepts for the future of our country and who forms the best team to deal with the challenges,” Laschet told reporters in Berlin. “So it's important now for the Union, the CDU and CSU to go into the election campaign as a team.”

Parts of the CDU strongly favored Soeder, while others vehemently opposed his bid to elbow Laschet aside for the top job. Soeder has much better poll ratings, but Laschet was elected in January to head the far bigger party. It was primarily a conflict of personality and style rather than policy.

Laschet governs the western state of North Rhine-Westphalia and Soeder the southern state of Bavaria.

Early last week, Laschet informally rallied the CDU leadership behind his bid. But Soeder said the matter shouldn’t be resolved “only in a small back room.”

After days of talks failed to produce a solution but laid bare divisions in the CDU, Soeder said Monday the bigger party must decide and he would respect a “clear decision.”

At a turbulent CDU leadership meeting, 31 of its members voted for Laschet, nine for Soeder and six abstained, news agency dpa reported. That prompted Soeder to concede.

The Union bloc campaigns together in federal elections and has a joint parliamentary group. The CSU exists only in Bavaria, while the CDU runs in Germany’s other 15 states.

The Union leads polls ahead of the environmentalist Greens, who on Monday nominated Annalena Baerbock as their first candidate to be chancellor. The struggling center-left Social Democrats nominated Finance Minister Olaf Scholz as their candidate months ago.

Laschet, a miner’s son from Aachen, a city on Germany's border with Belgium and the Netherlands, served as a member of the European Parliament from 1999 to 2005.

He was elected in 2017 as governor of North Rhine-Westphalia, a traditional center-left stronghold.

Supporters frequently point to that victory when asked about his poor poll ratings — along with his success in the race to lead Merkel's party, in which he beat conservative favorite Friedrich Merz.

They also emphasize his conciliatory nature. Laschet governs his home region in a coalition with the pro-business Free Democrats, but likely could work smoothly with a partner further to the left. Current polls suggest the Greens could hold the key to forming the next government, even if Baerbock doesn't win the election.

Still, Laschet — whose centrist politics are largely in line with Merkel's pragmatic approach — hasn't had a honeymoon as CDU leader. In recent weeks, he drew criticism for appearing to dither over how to manage a resurgence in coronavirus cases, while Soeder has cultivated an image as a decisive backer of tough action. Last month, the CDU lost two state elections.

National polls have shown the Union giving up gains it made thanks to Merkel’s management of the early stages of the pandemic. There has been discontent with a slow start to Germany's vaccination campaign and a scandal over some Union lawmakers' alleged profiteering from mask-procurement deals last year.

On Tuesday, Laschet said saving lives over the coming weeks and months is the top priority at present, but “people expect of politicians that they think beyond today.”

“We must become better, faster and more modern as a country,” he said. “That was necessary anyway, but it is even more necessary after the pandemic — more innovation, more confidence, less bureaucracy.”

Laschet, who served as his state’s minister for the integration of immigrants in the late 2000s, also stressed that “we must see diversity as an opportunity and not as a threat.”

Laschet emphasized his pro-European Union credentials and said a Germany under his leadership would have “a firm belief in multilateral solutions.”