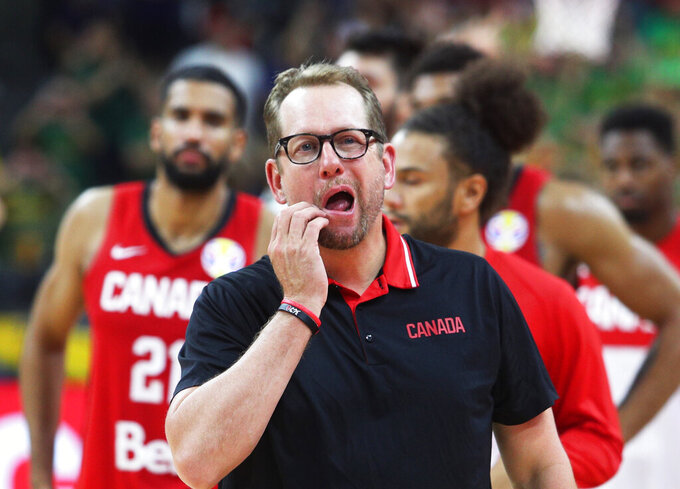 Toronto coach Nick Nurse is an American. Born in Iowa. Owns a home in Florida. A lifetime fan of the Chicago Cubs.

Nurse — the coach of the Canadian men's national team — hasn’t coached a game in that country since February 2020 because of the coronavirus pandemic. The pandemic forced Nurse and his NBA Raptors to play all 96 of their games out of the country since the virus struck in the U.S.

But he’s now back in Canada, and that nation will host one of the four Olympic qualifying basketball tournaments that begin on Tuesday to start determining the final four spots in the 12-team field for the Tokyo Games.

Canada is trying to make the Olympic field for the first time since 2000.

“There’s nothing else I’d rather be doing,” Nurse said. “I’m super appreciative of the guys that are here and we are as a Canada Basketball organization. We’ve been in the bubble in Orlando; a lot of these guys were there as well. We’ve played in front of no fans. We’ve gone through all these protocols. There’s been like 400 straight days of testing or whatever it was.

“The point is, it means everything that they’ve committed. It really does.”

There are 23 teams still in the running for the four remaining spots. It was supposed to be 24 teams; Senegal has been withdrawn from the tournament. FIBA said Monday the decision was a result of issues related to tests that were positive COVID-19. Senegal — which had been training in Germany — will forfeit its games against Puerto Rico and Italy, two teams that will move into the semifinals of the qualifier in Serbia.

“FIBA was informed by the National Federation of Senegal about COVID-19 related disruptions to their preparations in Germany,” FIBA said Monday. “Despite continuous effort from FIBA and the German Basketball Federation to support the Senegalese delegation, the team will not be able to travel to Belgrade and take part in the (Olympic Qualifying Tournament).”

Some things to know about the qualifying tournaments, where the top two finishers from each three-team group will move into the semifinals and try to get into the four Olympic berth-deciding games on July 4:

At stake: The winner of the Victoria tournament will be placed in Group A of the Tokyo Olympic field, and will play there against Iran, France and the United States.

Teams: Germany, Russia, Mexico in Group A; Tunisia, Croatia, Brazil in Group B.

Notable: Germany won’t have Dennis Schröder because of issues securing future contract insurance for the looming NBA free agent. ... Anderson Varejao, now 38, is likely pursuing his final Olympic berth. ... Bojan Bogdanović headed home to Croatia immediately after Utah was eliminated from the NBA playoffs so he could prepare for this event.

Notable: Goran Dragic’s retirement from international basketball means that Luka Doncic is now the unquestioned leader of the Slovenian team. ... Domantas Sabonis and Jonas Valanciunas give Lithuania what could be a dominant frontcourt.

At stake: The winner of the Kaunas tournament will be placed in Group C of the Tokyo Olympic field, facing Argentina, Spain and Japan.

Notable: Senegal’s issues means that, unless FIBA adjusts things, Puerto Rico and Italy basically get byes into the qualifier semifinals. ... Reigning NBA MVP Nikola Jokic said he will not play for Serbia this summer and will recover from the grind of the season.