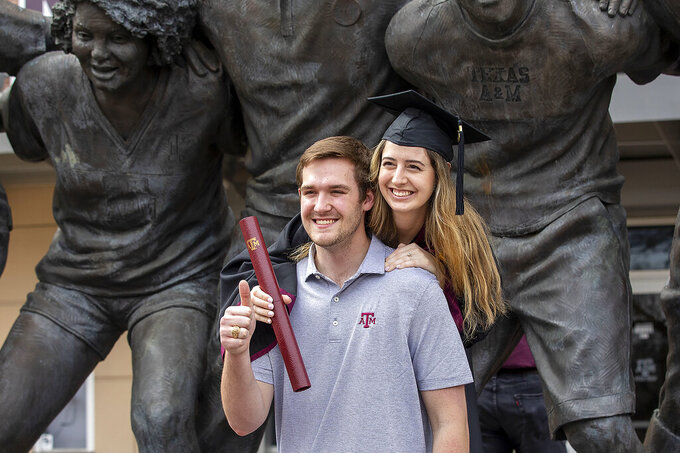 In this March 12, 2021, photo, Micah Shackel poses for pictures at the War Hymn Monument with her fiance, Josh Dickens, following a Texas A&M University makeup graduation ceremony for spring and summer 2020 graduates, at Kyle Field in College Station, Texas. Scores of campuses around the U.S. are offering last year's graduates a chance to experience the in-person commencements they missed out on when the pandemic upended life, Some are inviting them to join in festivities for the Class of 2021, while others are hosting separate commencements for them this spring or special events later this year.(Michael Miller/College Station Eagle via AP)

WESTERVILLE, Ohio (AP) — After she was picked as commencement speaker for fellow 2020 graduates at Otterbein University, Katie Exline considered focusing her speech on perspective. By the time she finally got to deliver it in front of them this month, they already had some of that.

“I don’t need to tell you all about the incredible things we are going to do or the ways that we will grow during our careers, because we have already started that process,” Exline, fresh off her first year of optometry studies at another university, said during the socially distanced ceremony at the small Ohio school. “This past year has been filled with uncertainties and situations far beyond anything I would have even dreamed of writing in a speech for the spring of 2020.”

Like Otterbein, scores of campuses around the U.S. are offering last year's graduates a chance to experience the in-person commencements they missed out on when the pandemic upended life. Some are inviting them to join in festivities for the Class of 2021. Others are hosting separate commencements for them this spring or special events later this year.

“We definitely wanted to honor that 2020 just had a heck of a senior year, and we wanted to try to acknowledge that in a positive way,” said Sarah Fatherly, the provost and vice president for academic affairs at North Carolina's Queens University of Charlotte, which had its belated ceremony at a baseball stadium in early May.

Class president Juan Diego Mazuera Arias was disappointed to not have Queens’ traditional pomp and circumstance last spring. But he tried not to show it, he said, because his immigrant parents were so excited about watching their Colombian-born son, now a legal resident seeking U.S. citizenship, become the first in their family to graduate college.

“This in-person graduation means the absolute world to them,” said Mazuera Arias, who studied political science and has been working in Washington. “They, in a way, get to see all their hard work being paid off through me.”

The potential for commencement to be a transformative moment also factored in for planners at Owens Community College in Ohio, which decided 2020 graduates could join its May ceremony. Hunter Augustyniak, of Toledo, is eager for that celebratory closure after an anti-climactic ending with virtual classes and an internship that fell apart because of the pandemic.

“Coming from somebody who like literally dropped out of high school, never intended on going to college, first-generation student who is surrounded by college dropouts, it really did mean a lot to me,” said Augustyniak, who studied music business technology.

Some young adults already made transitions to jobs or other endeavors or just aren't interested in having a ceremony now. But it's clear a significant number find it fun and meaningful, said Jacob Lockhart, the 2020 class president at the University of Idaho.

“I still think that feeling of completion is what a lot of folks were longing for,” Lockhart said.

Skylar Smith, of Los Angeles, is traveling all the way from California back to Washington D.C. to attend Howard University’s commencement for 2020 grads. Smith, now training for a job in medical device sales, said it’s worth the trip to “get that last hurrah” with friends from school and from her swim team.

The University of Missouri had multiple ceremonies for its 2020 alumni, honoring a few hundred at a time in its arena. Texas A&M brought 2020 grads back to its football stadium for a celebration.

Many of the schools hosting graduations are limiting or excluding guests, staying outdoors, requiring masks and social distancing, and skipping the handshakes or the stage crossings altogether. Plenty more campuses are forgoing traditional commencements again this year because of coronavirus concerns, opting instead for virtual or alternative celebrations.

At Sacramento State's “CARmencement,” 2020 and 2021 degree recipients will get to decorate their vehicles and drive through campus with guests, being cheered by faculty and staff at designated spots along the route. Several other schools scheduled drive-in graduations or staggered solo opportunities for graduates to walk across a stage and get their photo taken.

Still others are promising opportunities for in-person acknowledgement this summer, during homecoming weekends this fall, or further down the line. The University of Michigan invited 2020 and 2021 graduates to return for one of its future commencements, promising they’d be recognized for not only their academic accomplishments but "their resilience and fortitude in persevering during these challenging times.”

Abigail Barrett of Swanton, Ohio, is grateful she doesn't have to wait any longer to mark earning her associate’s degree last year. Barrett, 17, took classes at Owens Community College through a program that lets teens earn high school and college credits simultaneously. Despite the pandemic delay, she said she'll still get to enjoy her Owens commencement even before she gets her high school diploma later in May.

“Definitely assume I'm smiling big under that mask,” she said.