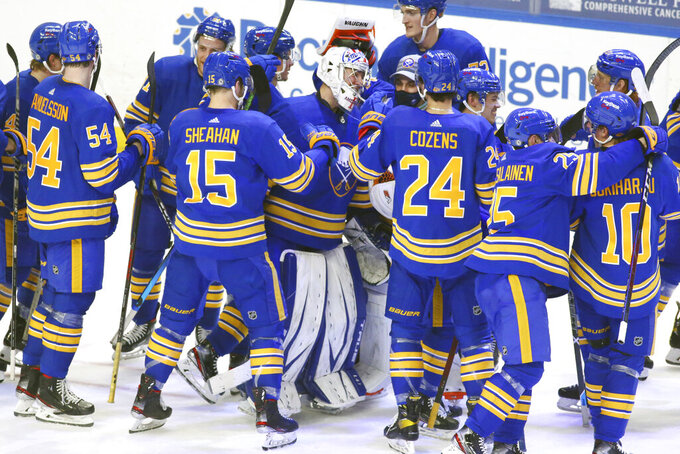 FILE - In this May 4, 2021, file photo, Buffalo Sabres goalie Michael Houser (32) and teammates celebrate a victory over the New York Islanders in a shootout in an NHL hockey game in Buffalo, N.Y. The Sabres won the NHL draft lottery and the expansion Seattle Kraken jumped up the order to take the No. 2 pick Wednesday night, June 2. (AP Photo/Jeffrey T. Barnes, File)

BUFFALO, N.Y. (AP) — If only for a brief moment, Sabres general manager Kevyn Adams could put aside concerns over captain Jack Eichel’s future, an ongoing coaching search and memories of a frustrating season, to celebrate an actual victory.

That it came at the expense of former Carolina Hurricanes teammate and fellow GM, Ron Francis of the NHL expansion Seattle Kraken, made Adams feel even better.

Buffalo won the NHL draft lottery on Wednesday in what became a showdown between a Sabres team in need of a fresh start, and a Seattle expansion franchise preparing to embark on its first season. Adams was aware of who he was up against upon seeing Francis pictured next to him on a split-screen as the lottery winner was announced .

“My heard was racing,” Adams said. “And there was Ronnie Francis, a good friend and former teammate of mine. It’s the only time I’ve ever beaten Ron. So I’ve got to be excited about that.”

Seattle, meantime, can get, ahem, Kraken after landing the No. 2 selection by jumping ahead of Anaheim. The Ducks finished 30th in the overall standings, but slid into the third draft spot.

Francis joked that perhaps he shouldn’t have sent Adams a text wishing him luck before the lottery began.

As consolations go, the opportunity to move up one spot in the order was far better than the Kraken’s worst-case scenario of sliding to fifth.

“I wish it could have been us, but based on where we were, the fact that we did move up is exciting for us and our fans and our ownership group,” Francis said.

The Kraken had the third-best odds at 10.3% — tied with New Jersey — in becoming the NHL’s first of six expansion teams to win a lottery selection since the event was established in 1995.

In 2017, the Vegas Golden Knights were in the same position as Seattle, but wound up selecting sixth after losing three lottery drawings.

The only change this year involved the NHL reducing the number of drawings to determine the top two slots.

The Sabres had a 16.6% chance of landing the top pick, which was 1.9 points lower than the previous three lotteries in becoming the 10th last-place team to retain the top pick in the lottery era.

“To have this fall our way, to be in this position, it’s whoo. It makes some of the things we went through this year, I feel a little better about it,” Adams said. “It’s a huge opportunity for our franchise to improve. I feel like this is a really, really big step, something we need.”

The Sabres endured a calamitous season in which they fired coach Ralph Krueger in mid-March while in the midst of an 18-game winless streak, which matched the NHL’s 14th-worst drought. Buffalo also missed the playoffs for a 10th consecutive season to match the NHL record.

The Arizona Coyotes, who finished 22nd, were barred from winning the lottery after the NHL stripped the team of its first-round selection for violating league rules by physically testing draft-eligible players before the 2020 pre-draft combine. Though Arizona was included in the lottery process to maintain the odds, the NHL would have redrawn if the Coyotes’ number came up.

The remaining 12 teams retained their order in the draft by virtue of where they finished in the standings, with New Jersey sitting fourth and the New York Rangers 15th.

The two-day draft will be held virtually for a second consecutive year, with the first round being held on July 23 — two days after the Kraken's expansion draft.

The coronavirus pandemic has added more uncertainty to this year’s class of prospects, due to shortened or even canceled seasons, and because of travel limits placed on scouting staffs.

The Wolverines are rounded out by centers Kent Johnson, ranked third, and Matthew Beniers, ranked sixth.

In Buffalo, the Sabres woes carried over into the offseason with Eichel questioning his future by citing differences with the team over how to treat a herniated disk, which forced him to miss the final two months of the season.

Eichel favors having cervical disk replacement surgery, while Sabres doctors are against it because the procedure has never before performed on an NHL player.

With the two sides preparing to meet again this week, Adams said the team’s medical staff hasn’t changed its position.

Without providing a timeline on a decision, Adams has spent the past five weeks conducting a wide-ranging coaching search, whose candidates include Don Granato, who completed the season in an interim role.