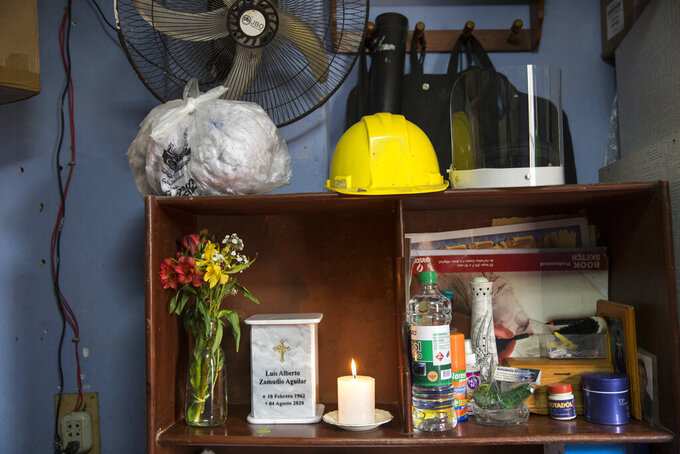 A marble urn that contains the cremated remains of security guard Luis Zamudio, who died from symptoms related to COVID-19 at the age of 58, sits on a shelf along with his helmet and his face shield at his home in Lima, Peru, Friday, Aug. 7, 2020. (AP Photo/Rodrigo Abd) 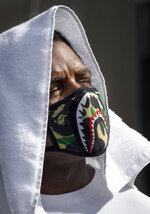 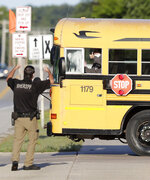 SYDNEY — Australian authorities have added 53 deaths at nursing homes from earlier this year to the country’s total of coronavirus deaths.

Those deaths plus six that officials reported Friday for the previous 24 hours raises Australia’s toll from the pandemic to 737.

Victoria state officials say the 53 earlier deaths were determined from reconciling numbers from July and August. An outbreak in the city of Melbourne has raced through dozens of aged-care homes, resulting in hundreds of deaths.

The outbreak in the state appears to be slowly waning, with Victoria officials reporting 81 new confirmed coronavirus cases Friday.

Victoria state chief health officer Brett Sutton says that “this is the stubborn tail of the epidemic curve.”

— White House faces skepticism over prospects for a vaccine

— An independent panel appointed by the WHO to review its coordination of the response to the coronavirus pandemic will have access to any internal U.N. agency documents, materials and emails.

— Growth in the U.S. services sector, where most Americans work, slowed in August after a big rebound in July, indicating lingering problems stemming from the coronavirus.

— Because of restrictions and bureaucratic hurdles, more than 1 million unemployed won’t receive a $300 check that President Donald Trump promised.

Authorities had earlier lifted a lockdown in Auckland following an outbreak there that began last month, but they continue to limit gathering sizes across the country and mandate that people wear masks on public transport.

Prime Minister Jacinda Ardern said Friday that “a cautious approach is the best long-term strategy to get our economy open and freedoms back faster in the long term.”

SEOUL, South Korea —- The number of new confirmed coronavirus cases in South Korea has stayed below 200 for the second consecutive day amid toughened social distancing rules.

The Korea Centers for Disease Control and Prevention said Friday it confirmed 198 additional cases in the latest 24-hour period, taking the country’s total to 20,842, with 331 deaths. About 70% of the new cases were in the densely populated Seoul metropolitan area.

South Korea has seen an uptick in infections since early last month, mostly linked to churches, restaurants, schools and fitness centers in the Seoul area. The daily case tally surpassed 400 in late August but has since showed a gradual downward trend.

Authorities in the Seoul area have recently restricted dining at restaurants and ordered the shutdown of churches, night establishments and after-school academics.

RENO, Nev. -- Nevada Gov. Steve Sisolak says he is pursuing the possibility of easing pandemic restrictions on religious gatherings as a rural church pushes forward with its legal effort to strike down the current 50-person cap as unconstitutional.

Lawyers for Calvary Chapel Dayton Valley filed new briefs in the 9th Circuit Court of Appeals on Wednesday after the U.S. Supreme Court narrowly refused its bid in July for an emergency order suspending the hard cap.

Sisolak, who is Catholic, said Thursday he has asked his advisers to review whether the state can ease that restriction and allow churches to expand how many people can attend.

RIO DE JANEIRO — The number of confirmed cornavirus cases in Brazil has risen above 4 million. Data the health ministry released Thursday evening also shows that the virus has caused nearly 125,000 deaths in Brazil since the pandemic began.

Both totals are the second highest for any country in the world, behind the United States, according to the tally kept by Johns Hopkins University.

Latin America’s largest nation has seen its daily number of new cases fall over the past six weeks, but it continues to report more than 35,000 per day. Its weekly COVID-19 death toll has also started to tip downward after a prolonged, elevated plateau.

SANTA FE, N.M. -- Some grade schools in New Mexico will be allowed to have in-person learning next week, but it’s unclear how many are signing up.

The majority of counties in the state have low enough coronavirus case rates to allow for students to attend two days per week. But Public Education Department Secretary Ryan Stewart says the state will not mandate in-person learning during the coronavirus pandemic.

Many districts have decided to keep schools online-only through the end of September. Albuquerque Public Schools, the state’s largest district, has decided against nearly all in-person learning until January.

Stewart says the situation is fluid and some school boards could announce in-person learning plans for younger students as soon as Friday.

NASHVILLE, Tenn. — Tennessee Gov. Bill Lee is declining to say whether he would be vaccinated against the coronavirus when a vaccine becomes available.

The U.S. government has told public health departments to prepare to distribute vaccines as early as Nov. 1 and Lee said Thursday that Tennessee is working to develop a distribution plan.

But the governor also says being vaccinated is a personal choice. Lee says he will do what he wants all Tennesseans to do — to decide if the vaccine is “safe and effective” and to talk to their doctors.

LANSING, Mich. — Michigan Gov. Gretchen Whitmer says that gyms can reopen after 5 1/2 months of closure and that more organized sports can resume if face masks are worn. The move announced Thursday will lift some coronavirus restrictions that lasted longer in Michigan than in many other states.

The order takes effect next Wednesday and allows for the reopening of fitness centers and indoor pools in a swath of the state that is home to 93% of Michigan’s people. Face coverings will be required at all times inside gyms, including during exercise.

The governor also is allowing athletic competitions to resume in regions where they have been restricted. But her guidance recommends against sports involving more than fleeting contact, such as football, basketball, soccer, lacrosse and hockey.

PHOENIX — Most counties in Arizona have been cleared to transition their schools to some form of in-person learning after improvements in coronavirus data.

The state Department of Health Services said Thursday that eight of Arizona’s 15 counties now meet the benchmarks required to do a hybrid of remote and in-person instruction if they choose to. In addition, two other mostly rural counties got the green light to switch to full-time, in-person classes.

For a county to offer hybrid instruction, it must have a decline in new cases or a rate of less than 100 new cases per 100,000 people in a two-week period, its test positivity rate must be below 7%, and its hospital visits for COVID-19-like illness be below 10%.

CONCORD, N.H. — New Hampshire Gov. Chris Sununu thinks it’s unrealistic to believe a coronavirus vaccine will be available by Nov. 1 but says his state will be prepared to distribute it if it is.

Federal health officials last week instructed states to be ready to begin distribution by Nov. 1 — two days before elections. The timing raised suspicion among public health experts about whether the Trump administration intends to rush approval for political gain.

Sununu said Thursday that he disagreed with that suspicion and called the letter “a smart move.” He says it's good to ensure everyone is ready just in case.

ROME — Italian health experts have recommended that nursing homes and other residences where disabled and other ‘’fragile” people live gradually allow visitors again with strict rules to guard against the spread of the coronavirus.

Deaths in residences for the elderly figured prominently in the heavy fatality toll of the first months of the pandemic in Italy, where the outbreak began in Europe.

The Superior Health Institute, which advises Italy’s public health system and Health Ministry, published guidelines on Thursday which recognized that meeting with loved ones is an integral part of the residents’ well-being. Still, the recommendations call for “avoiding handshakes, kisses and hugs” between residents and visitors in encounters, preferably held outdoors.

If residents are confined to a bed, then only one visitor should be allowed. If the guidelines are adopted by the government, new residents could be admitted, including from hospitals.

But they would need coronavirus tests and must stay in a separate part of the facility, away from the current residents, for 14 days.

NORMAN, Okla. — More than a dozen University of Oklahoma students gathered outside the university’s administration building Thursday to protest what they say is an inadequate response to the coronavirus pandemic.

Student Kellie Dick, a senior from Shawnee, told The Associated Press that students are violating the university and the city of Norman’s mask mandates at bars, restaurants and fraternity and sorority functions.

In her words: “We really need people to wear their masks. I don’t want this to kill any more people than it already has.”

The protesting students presented a list of 12 demands that include online classes for most subjects, twice-weekly free coronavirus testing for the university's students, faculty and staff, and the prohibition of social gatherings of more than 25 people.

The university's chief COVID-19 official earlier Thursday told the Oklahoma State Regents for Higher Education that there have been no known transmissions of the virus in classrooms, but that the virus spread occurs in areas OU cannot control.

MILWAUKEE — Milwaukee’s health commissioner is quitting to take a new job, citing the partisan battles management of the coronavirus.

Republican lawmakers brought a successful lawsuit before the state Supreme Court this spring ending Democratic Gov. Tony Evers’ “safer at home” order designed to slow the spread of the virus. A conservative law firm has filed a lawsuit seeking to end the Evers mask mandate, which the Republican Senate majority leader has denounced.

Milwaukee has reported more than 17,700 positive cases and more than 275 deaths. Wisconsin has reported 1,142 deaths, according to the state Department of Health Services.

PITTSBURGH — Federal agents searched two nursing homes Thursday near Pittsburgh, one of which had the worst coronavirus outbreak of any in Pennsylvania and was already being investigated by the state on suspicion of criminal neglect.

More than 330 of the for-profit Brighton nursing home’s residents tested positive for the virus since the end of March and at least 82 died, the newspaper reported.

A spokesperson for the Pennsylvania attorney general’s office confirmed the office was involved in the warrant execution.

MADRID — Spain on Thursday added nearly 9,000 new infections to a total of more than 488,500 since the start of the pandemic.

About 3,600 of the new cases were diagnosed in the past 24 hours, with the others in previous days but just reported.

The Madrid region, population 6.6 million, accounts for more than a third of the country’s new cases. About 16% of its hospital beds are currently devoted to treating COVID-19 patients, the highest rate in Spain.

With 40 new deaths recorded on Thursday, the total toll rose to 29,234. The figure doesn’t reflect those who have died without being tested for the virus.

FURMAN, S.C. — A fraternity at a South Carolina university has been suspended for at least four years after it hosted a pair of parties that led to the spread of the coronavirus.

In a statement, Furman University says Kappa Alpha held parties at their fraternity house Aug. 21 and Aug. 22 and nearly 60% of those who attended -- at least 29 students -- tested positive for the coronavirus. Those who tested positive have been quarantined, the university says.

Meanwhile, Indiana University officials have requested all 40 fraternity and sorority houses at its Bloomington campus to shut down, saying their high rates of coronavirus infections made them unsafe. Testing at some houses found infection rates above 50 percent.