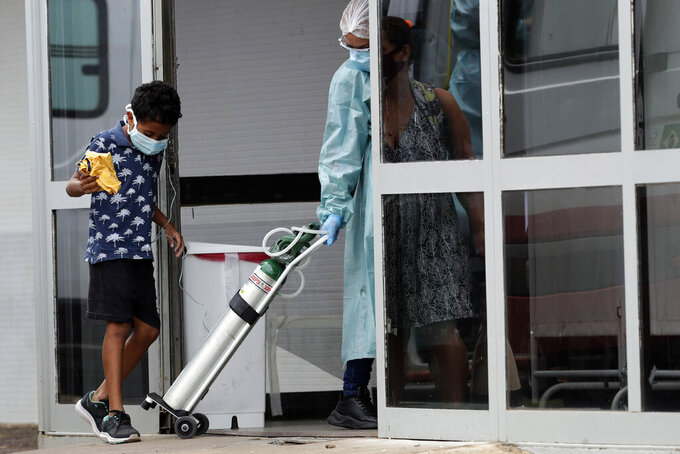 A healthcare worker rolls in an oxygen cylinder used by a boy suspected of having COVID-19 as he enters the public HRAN Hospital in Brasilia, Brazil, Thursday, March 11, 2021. The HRAN is the reference hospital for the treatment of the new coronavirus cases. (AP Photo/Eraldo Peres)

Australia has provided 8,000 AstraZeneca doses from its own stockpile to its nearest neighbor after an explosion of infections in the South Pacific island nation in recent weeks.

Morrison said Friday that the European Union has yet to respond to his recent request for 1 million AstraZeneca doses contracted by Australia to be sent to Papua New Guinea as soon as possible.

He says that “it’s not right for advanced countries in Europe to deny the supply of vaccines to developing countries who need it desperately like Papua New Guinea.”

CASES: The seven-day rolling average for daily new cases in the U.S. decreased over the past two weeks from 63,846 on March 3 to 54,821 on Wednesday, according to Johns Hopkins University.

DEATHS: The seven-day rolling average for daily new deaths in the U.S. decreased over the past two weeks from 1,846 on March 3 to 1,230 on Wednesday, according to Johns Hopkins University.

OLYMPIA, Wash. — Restaurant workers and people with two or more underlying medical conditions are among the groups in Washington state who will be able to get the coronavirus vaccine starting March 31.

Washington Gov. Jay Inslee announced the broad expansion of eligibility Thursday, a day after grocery store workers, law enforcement and agricultural workers became eligible for vaccination, along with pregnant women and people with a disability that puts them at high risk for severe COVID-19 illness.

About 3 million of the state’s more than 7.6 million residents are already eligible for the vaccine. The next phase that takes effect at the end of the month will add 2 million more people.

Gov. Mike Parson added Thursday that vaccines will then be made available to everyone in Missouri beginning April 9.

Parson says he expects a large influx of vaccine doses to Missouri beginning in April, and his administration wants to open up eligibility to ensure there are enough interested people ready to be vaccinated.

The governor says that “with the progress we are currently seeing and vaccine supply expected to increase significantly in the coming weeks, we are well ahead of schedule with our vaccine plan.”

WASHINGTON — A new analysis suggests the coronavirus pandemic likely began in China’s Hubei province a month or two earlier than late December 2019, when a cluster of cases tied to a seafood market was first detected.

Scientists traced mutations back in time to estimate when a common ancestral virus first emerged, did modeling exercises on how the new coronavirus spread, and reported their findings Thursday in the journal Science. LINK: https://science.sciencemag.org/content/early/2021/03/17/science.abf8003

Evolutionary biologist Michael Worobey says the study is “pointing pretty strongly to that market not being the original source of the virus but the first place where it encountered sort of one of these superspreading events.”

Public health expert William Hanage, who had no role in the study, says the conclusions are “very, very plausible” and the work “pushes back in time” estimates of the origins of the outbreak.

TOPEKA, Kan. — Kansas legislators are working to give prosecutors and courts time to clear a backlog of criminal cases that have built up during the coronavirus pandemic.

The Senate voted 32-7 Wednesday night to approve a bill that would suspend until May 1, 2023, a law aimed at protecting defendants’ constitutional right to a speedy trial. The law requires cases to come to trial within five months of a defendant who has been jailed entering a plea or within six months if the defendant is free on bond.

Lawmakers say Kansas has a backlog of about 5,000 criminal cases and prosecutors worry many of them will have to be dismissed if the deadlines are not suspended.

Some legislators are nervous about suspending the deadlines, worried that defendants will languish unnecessarily in jail.

MADRID — Spain’s health minister says the country will resume vaccinating with AstraZeneca doses next Wednesday but officials will revise over the weekend which groups to exclude to minimize risks.

Carolina Darias said authorities at the national and regional level will assess the jab’s updated technical sheet and give new guidelines to doctors.

The minister spoke after an urgent meeting with health officials from the country’s regions following the European Union’s drug regulatory announcement that the vaccine is safe.

The head of Spain’s drug agency says resuming now after assessing a series of rare blood clots in a dozen patients who had received the AstraZeneca jab “should strengthen trust in the vaccines.”

After weeks of falling contagion rates, Spain’s coronavirus pandemic incidence is on the rise again, prompting fears that the country could soon join the uptick that the rest of Europe is experiencing.

As part of a settlement filed in the Flathead County district court Thursday, the businesses are also dropping counterclaims against the state.

The lawsuit was filed by the state health department under former Gov. Steve Bullock, a Democrat, last October.

It accused the businesses of failing to adequately enforce the statewide mask mandate meant to limit the spread of COVID-19.

Gianforte, a Republican, promised to end the legal action soon after taking office in January.

PRAGUE — With infection and death rates remaining at high levels, the Czech government has extended the country’s tight lockdown till after Easter.

Health Minister Jan Blatny says his country is still not in a position to relax the measures.

Among the restrictions in one of the hardest-hit countries in the European Union, people have been banned from traveling to other counties unless they go to work or have to take care of relatives.

It’s part of a series of step as the Central European nation has been seeking to slow down the spread of a highly contagious virus variant first found in Britain and prevent the country’s hospitals from collapsing.

Of the 8,910 COVID-19 patients in Czech hospitals on Wednesday, 1,989 needed intensive care. Both the numbers are close to the records set earlier this week.

Blatny said the situation in should start to improve after by the end of this week and the number of hospitalized to drop to some 5,000 in April.

The nation of 10.7 million has over 1.4 million confirmed cases with more than almost 24,100 deaths.

PROVIDENCE, R.I — Rhode Island Gov. Daniel McKee pledged to bring back Newport’s jazz and folk festivals, as well as other large outdoor events, this summer after they were canceled in 2020 because of the pandemic.

“We are working closely with the Newport Folk and Jazz Festival on a plan that could allow them to host a safe event this summer that involves testing and other safety protocols,” he said. “The good news is there will be music in Newport this summer.”

He made the announcement now because he knows it takes several months to plan such large-scale events.

“Governor McKee of Rhode Island has indicated that we will be able to have events this summer with modified capacities. Though Newport Folk won’t look exactly the same, we are thrilled to be bringing music and artists back to the Fort.”

BATON ROUGE, La. — Gov. John Bel Edwards is further expanding eligibility to the coronavirus vaccine to a long list of healthy essential workers in Louisiana who don’t have one of the two dozen medical conditions that already provided access.

The new rules take effect Monday and include workers at grocery stores, bars, restaurants and colleges, among others.

Edwards widened access earlier this month to anyone 16 and older who has among two dozen health conditions, people who are overweight and smokers. Most adults are expected to meet one of the eligibility criteria.

Louisiana also kicked off an outreach campaign Thursday aimed at getting vaccines to people in underserved areas and persuading the skeptical.

LISBON, Portugal — Portugal says it will resume administering the AstraZeneca vaccine against COVID-19 from Monday, a week after it temporarily halted its use while continuing with other jabs.

The announcement Thursday came a few hours after European authorities said the AstraZeneca shot is safe and effective.

The head of Portugal’s COVID-19 vaccination task force, Rear Admiral Henrique Gouveia e Melo, said around 120,000 people who were slated to have the jab during the stoppage will be at the front of the line when AstraZeneca inoculations resume.

Portugal followed Germany, France and Spain in temporarily halting use of the AstraZeneca jab. The governments said they would await a European Medicines Agency report on links between the vaccine and rare types of blood clots.

As in other European Union countries, Portugal’s vaccination program is running behind schedule due to a shortage of jabs.

WASHINGTON — The U.S. is finalizing plans to send a combined 4 million doses of the AstraZeneca COVID-19 vaccine to Mexico and Canada in its first export of shots.

White House press secretary Jen Psaki says the Biden administration is planning to send 2.5 million doses to Mexico and 1.5 million to Canada as a “loan.”

The AstraZeneca vaccine has not been authorized for use in the U.S. but has been authorized by the World Health Organization. The premier of Ontario, Doug Ford, thanked Biden for his willingness to share the vaccines.

Canadian regulators have approved the Pfizer, Moderna, AstraZeneca and Johnson & Johnson vaccines, but acquiring them has proven difficult. Canada ranks about 20th in the number of doses administered, with about 8% of the adult population getting at least one shot. That compares with about 38% in the U.K. and 22% in the U.S.

Mexico has fully vaccinated more than 600,000 people and more than 4 million have received a single dose in a country of 126 million.

JOHANNESBURG — Africa’s ability to produce COVID-19 vaccines got a boost Thursday with the announcement that Biovac has signed a full manufacturing partnership with US-based ImmunityBio.

Biovac is a laboratory partly owned by the South African state. It has an agreement with ImmunityBio, which has a COVID-19 vaccine in clinical trials, to produce the vaccine sometime next year.

Biovac, based in Cape Town, has the capacity to produce between 20 million and 30 million vaccines in a year.

South Africa’s Aspen Pharmacare is awaiting approval to assemble the Johnson & Johnson vaccine, a process of blending the ingredients sent in large batches and putting the vaccine into vials – the filling and finishing. Aspen said it has the capacity to produce 300 million doses annually of the J&J vaccine.

NEW YORK — It’s showtime! AMC Theatres says it will have 98% of its U.S. movie theaters open on Friday. Even more theaters are expected to open by March 26.

AMC says more than 40 of its locations in California are reopening on Friday and will open 52 of its 54 locations by Monday. The company is preparing to resume operations at the rest of its California locations once the proper local approvals are in place. AMC previously opened more than 500 of its theaters elsewhere around the country.

Some movie theaters have opened over the past few months with limited capacity and enhanced safety protocols.