The Latest: Bears unsure if fans will be allowed at home 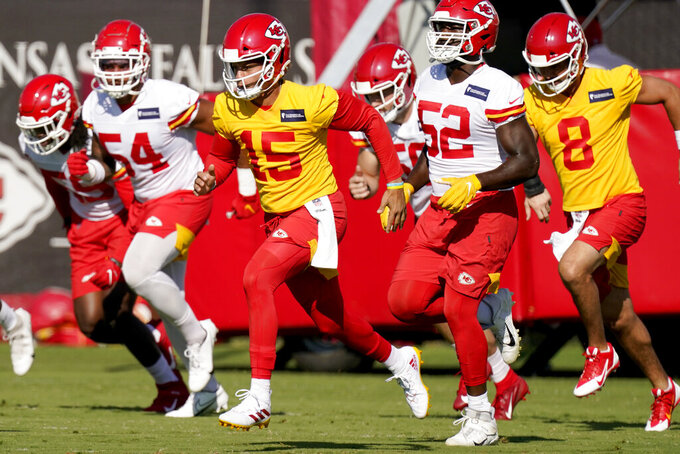 The Chicago Bears remain unsure if fans will be allowed at Soldier Field this season.

The Bears said Monday the team and city will “continue to monitor the environment” and both “believe there can be a sound plan in place to bring fans back to Soldier Field once it is deemed safe and appropriate.”

The Bears canceled season ticket packages last month because of the COVID-19 pandemic. They offered holders the option to get refunds for this year or have their payments credited toward 2021.

Chicago opens the season Sept. 13 at Detroit and hosts the New York Giants a week later.

The United Soccer League says 1,488 COVID-19 tests were administered to players and staff from the 35 Championship clubs between Aug. 3 and Aug. 10, with 13 individuals from seven teams testing positive.

Of those tests, 441 were administered to the 11 League One clubs, with six individuals from five clubs testing positive.

The league says anybody who tested positive will have self-isolated in line with the guidelines provided by the USL. Only those who tested negative will be allowed to enter training ground facilities, and anyone identified via contact tracing will be quarantined and tested.

The University of North Carolina says it still plans to play sports this fall after canceling in-person undergraduate classes in favor of remote instruction amid the coronavirus pandemic.

The school announced the move to online-only instruction on Monday after reporting four coronavirus clusters involving student housing or a fraternity since Friday. UNC’s athletics department later issued a statement saying athletes will continue to take classes online and be able to participate in workouts while following safety protocols.

Athletes can choose to remain in current residences either on or off the Chapel Hill campus.

UNC is a member of the Atlantic Coast Conference, which has announced plans to begin its football and other fall sports seasons the week of Sept. 7.

“We still are expecting to play this fall, and we will continue to evaluate the situation in coordination with the university, the ACC, state and local officials, and health officials,” UNC’s athletics department said in the statement. “The health and safety of our student-athletes, coaches and staff, and community remains our priority.”

The Kansas City Chiefs will limit capacity of Arrowhead Stadium to 22% when they begin defense of their Super Bowl title, which equates to about 17,000 fans at what is considered one of the toughest environments in the NFL.

The club announced its plans along with ticketing information for its first three games on Monday after consulting with officials from The University of Kansas Health System. Tickets will be sold in “grouped pods of seats” beginning next week.

Only the first three home games — against the Texans, Patriots and Raiders — will go on sale initially to season ticket holders. The Chiefs said guidance from local and public health officials will determine capacity all the season.

While the Chiefs plan to allow tailgating, fans will be limited to the area directly behind their vehicle and with fans who have tickets in their pods. They are encouraged to wear face coverings, which are mandatory inside the stadium, and to use proper social distancing throughout game days.

Due to the situation surrounding COVID-19, the United States Tennis Association has canceled all national junior events through Oct. 12.

The USTA also has canceled all adult Category 1 events, comprising the Adult, Open, Family, and Age divisions, through the end of the year.

The decision to cancel was made to ensure the health and safety of all those involved since interstate travel required for the tournaments carries an increased risk of contracting the disease.

The USTA said different regulations, restrictions and quarantine periods at the sites of the events and in the home states of the players were considered.

Auburn football coach Gus Malzahn says his players have had 33 positive tests for COVID-19 this summer.

Malzahn says one staff member also tested positive earlier this summer. The Tigers and other Southeastern Conference teams opened preseason camp Monday ahead of a season scheduled to start on Sept. 26.

Malzahn says Auburn had no positive tests last week, but four players are still going through the testing protocols. He expects results back by the end of the week.

He says the school has administered 863 tests among players, an average of more than seven times each. Staffers have had five tests each.

Linebacker Chandler Wooten and backup defensive back Traivon Leonard have opted out playing this season.

Furman of the Division I Southern Conference is postponing all fall nonconference sports due to the coronavirus pandemic.

Athletic director Jason Donnelly said Monday the decision came after last week’s announcement that the league was pushing all its fall conference athletic competition and championships to the spring. Furman plays football in the Championship Subdivision.

Donnelly says the school in Greenville, South Carolina, made the decision to protect the health and safety of student-athletes, coaches and staff, and fans.

There will be no fans at Atlanta’s Mercedes-Benz Stadium for NFL and MLS games played in September. The Atlanta Falcons and Atlanta United say the coronavirus pandemic forced the decision.

The teams say they will continue to collaborate with local and national health officials before deciding on the possibility for fans in games after September.

The Falcons will play at least two home games without fans — against Seattle on Sept. 13 and against Chicago on Sept. 27.

“The health and safety of our fans is our top priority,” said Steve Cannon, CEO of the Falcons and Atlanta United owner Arthur Blank’s sports and entertainment group. Cannon said the decision was made “after thoughtful consideration and collaboration.”

Atlanta United previously announced there would be no fans for three games: Aug. 22 against Nashville SC, Aug. 29 against Orlando City SC and Sept. 2 against Inter Miami CF.

Soccer’s U.S. Open Cup has been canceled this year because of the COVID-19 pandemic.

The 2020 tournament was suspended in early March shortly before it was supposed to kick off. The final was to be held on either Sept. 22 or 23.

Officially called the Lamar Hunt U.S. Open Cup, it is the longest-running soccer tournament in the United States and gives amateur teams a chance to take on the pros, setting up the chance for an intriguing Cinderella team to advance far into the tournament. The winner earns a spot in the Confederation of North, Central American and Caribbean Association Football’s Champions League.

The U.S. Soccer Federation announced Monday that the Open Cup couldn’t be staged this year because the pandemic affected teams’ ability to travel, limited or eliminated fans at games, and necessitated strict testing protocols.

The teams that were invited to participate this year will be invited next year instead.

There is no decision yet on how to allocate the CONCACAF Champions League slot that typically goes to the tournament champion.

Kansas State will allow 25% capacity at its football stadium for games this season after getting approval Monday from the county commission. That means a maximum crowd of just under 15,000 fans.

The Big 12 Conference is allowing schools to set their own attendance policies based on local jurisdictions.

The Riley County Commission reviewed the rest of Kansas State’s return-to-play protocols, too. Fans will be required to wear face coverings where 6 feet of social distancing cannot be maintained. Tailgating will not be permitted in parking lots controlled by the school. There will be no reentry. There also will be hand sanitizing stations and other protective measures.

One plus for fans: With the elimination of tailgating and reentry, the school will allow beer and wine to be purchased in general seating sections for the first time. Alcohol sales had been limited to luxury suites.

The CFL has canceled its 2020 season because of the COVID-19 pandemic. It marks the first year the Grey Cup won’t be presented since 1919.

The nine-team league announced the move Monday, dashing hopes of a shortened season in the hub city of Winnipeg, Manitoba. The decision comes after the CFL couldn’t solve a number of issues in an effort to try to salvage a season.

“Our league governors decided today it is in the best long-term interests of the CFL to concentrate on the future,” Commissioner Randy Ambrosie said in a statement.

“We are absolutely committed to 2021, to the future of our league and the pursuit of our vision of a bigger, stronger, more global CFL.”

Unlike other major leagues in North America, the CFL does not have the luxury of a billion-dollar television contract. While its deal with TSN has become more lucrative over the years, the CFL remains a gate-driven league — a major problem when fans aren’t allowed in the stands.

Johnson announced on Twitter that he’ll sit out the season and focus on completing his master’s degree in criminal justice in December.

The Southeastern Conference allows players to opt out of the season because of COVID-19 and remain on scholarship.

Johnson started all 12 games last season, allowing only one sack. His father, David, was hospitalized this summer because of the virus.

“I will be forever grateful for my time here at Ole Miss,” Johnson wrote Sunday night on Twitter. “God bless and Hotty Toddy.”