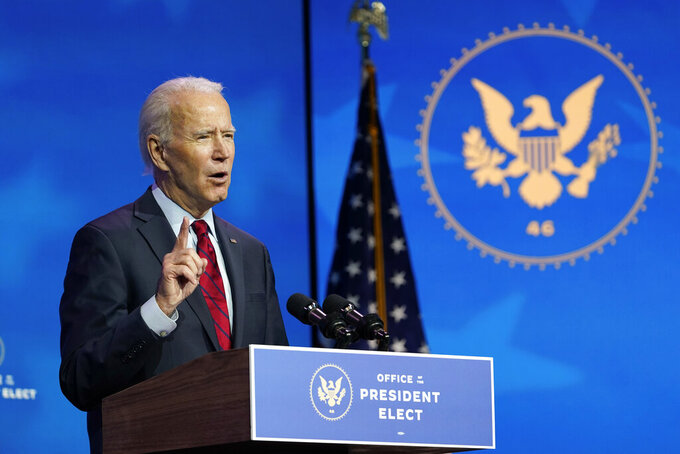 President-elect Joe Biden is confirming that he will nominate retired Army Gen. Lloyd Austin to be secretary of defense.

Word of the choice had leaked out Monday, prompting some members of Congress to raise doubts about the wisdom of putting a recently retired military officer in charge of the Defense Department. Austin, who served 41 years in uniform, retired four years ago.

Biden responded Tuesday with an article in The Atlantic in which he urged Congress to grant a waiver of the legal prohibition against anyone serving as secretary of defense who has not been out of uniform for at least seven years.

Such a waiver has been granted only twice in history — in 1950 and in 2017. Biden wrote that he believes in the importance of civilian control of the military. And he wrote that Austin knows that the secretary of defense has a different set of responsibilities than a military officer.

President-elect Joe Biden will nominate retired four-star Army general Lloyd J. Austin to be secretary of defense, according to four people familiar with the decision. If confirmed by the Senate, Austin would be the first Black leader of the Pentagon.

— Trump thought courts were key to winning, but judges disagreed

President-elect Joe Biden is promising to distribute a coronavirus vaccine to 100 million people during the first three months of his incoming administration, pledging “100 million shots in the first 100 days.”

At an event from Delaware to introduce his pandemic response team on Tuesday, Biden laid out his top three priorities for the start of his new government. He repeated his previous calls for all Americans to wear masks for 100 days to prevent the spread of the virus and said he’d mandate doing so in federal buildings and on public transportation, while also making the new promise to distribute 100 million vaccines shots over the same period.

Biden also said he believed that the virus can be brought under enough control to reopen “the majority of schools” within his first 100 days.

Those pledges came even as Biden struck a somber tone about the toll the coronavirus has already taken. He said that, after about nine months of living with the pandemic, the U.S. is “at risk of becoming numb to its toll on all of us.” The president-elect specifically noted the virus’s “disproportionate” effects on Americans of color, calling it a “mass casualty” for many minority groups.

The Joint Congressional Committee on Inaugural Ceremonies is being prevented from publicly announcing its plans for President-elect Joe Biden’s inauguration on Jan. 20.

That’s according to House Majority Leader Steny Hoyer, who said Republicans on the panel blocked his resolution Tuesday that would let the public know that planning is underway with COVID-related health and safety protocols.

Hoyer called the Republican refusal to accept the outcome of the election “astounding" and said it was “continued deference to President Trump's post-election temper tantrums.”

Blunt says, "It is not the job of the Joint Congressional Committee on Inaugural Ceremonies to get ahead of the electoral process and decide who we are inaugurating.”