The Latest: Biden: Trump inaugural presence important to US 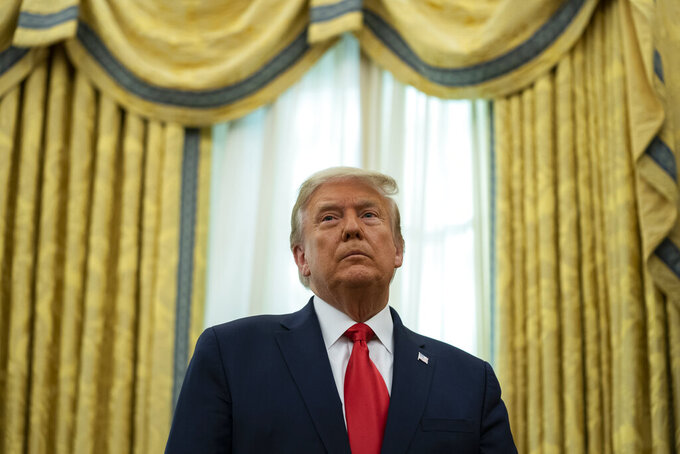 President Donald Trump listens during a ceremony to present the Presidential Medal of Freedom to former football coach Lou Holtz, in the Oval Office of the White House, Thursday, Dec. 3, 2020, in Washington. (AP Photo/Evan Vucci)

President-elect Joe Biden says it is important that President Donald Trump attend his inauguration only in the sense that it would demonstrate the nation’s commitment to a peaceful transfer of power between political rivals.

Trump aides have expressed skepticism that the president would attend Biden’s Jan. 20 inauguration. Trump has continued to falsely claim victory and spread baseless claims of fraud to try to explain away his loss.

Speaking Thursday to CNN, Biden said, “It is totally his decision.” He added, “It is of no personal consequence to me, but I think it is to the country.”

He said he hoped Trump would attend the inauguration to set an example to other nations on the democratic process.

Up soon for President-elect Joe Biden is naming his top health care officials as the coronavirus pandemic rages. He's also facing escalating pressure from competing factions within his own party as he finalizes his choice for secretary of defense.

— Trump expected to flex pardon powers on way out door

— Barr’s special counsel move could tie up his successor

Joe Biden is brushing off concerns by some leading African Americans that the major early picks for his Cabinet have not been diverse enough.

During an interview with CNN on Thursday, the president-elect was asked about House Majority Whip Jim Clyburn’s comments that many qualified Black people have been passed over in the picks Biden has made so far.

Biden responded that the eight choices he’s made “were the most diverse Cabinet anyone in American history has ever announced” and included five people of color and three white people, as well as five women and three men.

Biden also said he’d be meeting with NAACP leadership next Tuesday. He says he understands “their job is to push me.”

“Every special interest -- and I don’t say that in a negative way -- every advocacy group out there, is pushing for more, more, more of what they want. That’s their job,” Biden said. “My job is to keep my commitment.”

He added: “I promise you you’ll see the most diverse Cabinet.”

Speaking to CNN on Thursday, Biden says, “There have been more than several sitting Republican senators who have privately called me and congratulated me.”

As Trump continues to falsely claim victory and push unsubstantiated claims of fraud, Biden said the lawmakers “get put in a very tough position.”

He predicted that the situation will improve, with “at least a significant portion of the leadership,” after the Electoral College meets on Dec. 14.

Biden acknowledged that the Senate is a more partisan place than when he left it in 2009, but predicted it would still be possible to effectively legislate.

Members of the Congressional Hispanic Caucus have made a fresh push for President-elect Joe Biden to nominate New Mexico Gov. Michelle Lujan Grisham as health and human services secretary.

The lawmakers also encouraged Biden’s team to tap either California Attorney General Xavier Becerra or Democratic National Committee Chair Tom Perez for attorney general, according to a person on the Thursday virtual conference call who spoke on condition of anonymity to discuss it.

Several members spoke up for Lujan Grisham, who is apparently no longer in top running for the post. One lawmaker, Democratic Rep. Ben Ray Lujan of New Mexico, told Biden’s team that news leaks about her turning down another Cabinet job were inappropriate, the person on the call said.

Biden’s chief of staff, Ron Klain, who was on the call with other transition team officials, agreed, the person said. He told them it should not have happened.

The lawmakers are pressing to have Latinos in at least five Cabinet positions and fill 20% of the administrative appointments, reflective of their population.

Joe Biden says reports that President Donald Trump may be exploring preemptive pardons to protect his children, key aides and perhaps even himself from prosecution after he leaves office concern “me a great deal.”

The president-elect told CNN on Thursday that he’s worried about “what kind of precedent it sets, and how the rest of the world looks at us as a nation of laws and justice.”

Biden vowed to ensure that his own Justice Department operates independently. Trump has frequently pressured the agency to do his bidding.

“I’m not going to be telling them what they have to do and don’t have to do,” Biden said.

Biden added, “I guarantee you that’s how it will be run.”

President Donald Trump and the Republican National Committee have raised an eye-popping $495 million since mid-October, with much taken in after Election Day as the president fundraised off his baseless allegations of widespread election fraud.

The sum includes money raised by the Trump campaign, the RNC, their two joint fundraising committees and the president’s new political action committee, named “Save America.”

Much of the money was raised during the closing weeks of the campaign. But $207.5 million came in after Election Day as Trump repeatedly – and falsely – claimed President-elect Joe Biden won due to voter fraud.

Trump has spent millions on filing legal challenges and pushing for recounts after his Nov. 3 loss, but the largess is likely to be spent elsewhere.

Some is being funneled to Georgia, where Republicans are aiming to hold onto two Senate seats — and control of the chamber — in twin Jan. 5 runoffs.

Trump’s new PAC also allows him to build up his political bank account as he ponders his future, including a potential run in 2024.

So far, the PAC is off to a lackluster start. Despite the windfall, Save America reported in a campaign finance disclosure Thursday that it raised only $569,000 from its launch after Election Day through Nov. 23.

President-elect Joe Biden says he is keeping Dr. Anthony Fauci on as a chief medical adviser and a member of his COVID-19 advisory team.

Biden made the comments Thursday during an interview with CNN’s Jake Tapper. He said he spoke with Fauci earlier in the day about the need to instill confidence in any coronavirus vaccine and the fact that “you don’t have to close down the economy” to combat the virus.

Biden says he’d be “happy” to get a vaccine in public to prove its safety.

The president-elect also said he would ask the public to wear masks for 100 days to help drive down the spread of the virus, which has killed more than 275,000 Americans.

Attorney General William Barr is coming under criticism from members of the conservative House Freedom Caucus who are demanding a full review of the presidential election won by Joe Biden.

Several Freedom Caucus members aligned with President Donald Trump stood outside the Capitol on Thursday saying Barr needs to quickly explain what he is doing to investigate the vote. Barr said this week that the Department of Justice has not seen evidence of widespread voter fraud.

Florida Rep. Ted Yoho says, “We’ll accept the results, but not until we’re shown the fraud was taken out of that.”

Trump has refused to accept results showing that he is the first incumbent since George H.W. Bush in 1992 to lose reelection.

Biden won 306 electoral votes compared to 232 for Trump. The Electoral College split matches Trump’s victory over Hillary Clinton four years ago, which he described then as a “landslide.”

Rhode Island Gov. Gina Raimondo has knocked down talk that she is in the running for President-elect Joe Biden’s secretary of health and human services.

Speaking Thursday afternoon at a weekly briefing on the status of the pandemic in Rhode Island, Raimondo took a few moments at the end of her prepared remarks to rule herself out of that job.

“I am not going to be President-elect Biden’s nominee for HHS secretary,” Raimondo said. “My focus is right here in Rhode Island, as I have said. I’m working 24/7 to keep Rhode Islanders safe and keeping our economy moving, and I have nothing else to add on that topic.”

The governor in recent days had been mentioned as a leading contender for the job, along with former Surgeon General Vivek Murthy, co-chair of Biden’s coronavirus task force.

Deese is now the managing director and global head of sustainable investing at the BlackRock company. He worked on the auto bailout and environmental issues in the Obama White House, where he held the title of deputy director of both the NEC and the Office of Management and Budget.

Biden said Thursday in a prerecorded video announcing the appointment that Deese is “someone who looks at hard problems and finds solutions that help make life better for American families.”

Biden highlighted Deese’s expertise on climate policy, as he looks to make the issue a centerpiece of his White House agenda.

Flournoy’s appointment adds to a team of Harris advisers led by Black women. Harris is of Jamaican and Indian heritage and is the nation’s first female vice president. Flournoy joins Ashley Etienne as Harris’ communications director and Symone Sanders as her chief spokeswoman.

Flournoy has served as chief of staff for former President Bill Clinton since 2013. That follows a career that took her to top posts at the Democratic National Committee, in the presidential campaigns of former Vice President Al Gore and former Secretary of State Hillary Clinton and with the American Federation of Teachers.

Kosoglu served as Harris’ top adviser during the general election campaign. McEldowney is a former ambassador to Bulgaria and has 30 years of service in various diplomatic and foreign affairs jobs.