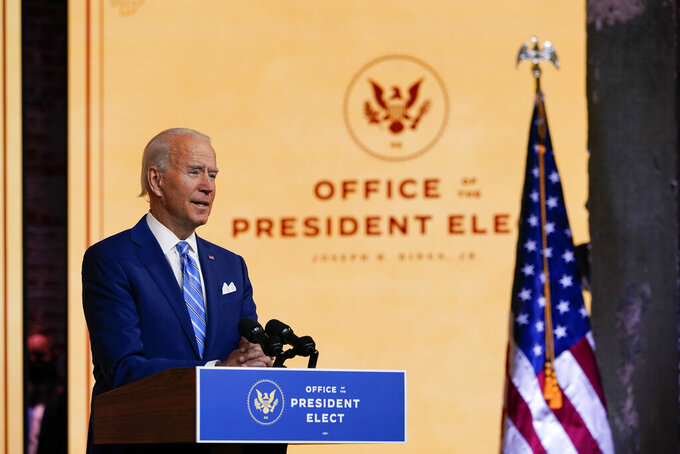 A big Biden family Thanksgiving is off the table for President-elect Joe Biden because of the pandemic.

In remarks billed as a Thanksgiving address to the nation, the Democrat urged Americans to “hang on” and not “surrender to the fatigue” after months of coping with the virus.

He noted that public health officials have asked Americans to give up many of the traditions that make Thanksgiving special, like big indoor family get-togethers.

Biden said he knows how hard it is to give up family traditions but that it’s very important this year given the spike in virus cases, averaging about 160,000 a day.

He urged everyone to wear masks, practice social distancing and limit the size of groups, calling it a “patriotic duty” until a vaccine is approved.

President Donald Trump uttered one falsehood after another as he baselessly claimed that he won the 2020 election instead of President-elect Joe Biden as he called into an event organized by Pennsylvania Republicans in Gettysburg.

Trump's election lawyer, Rudy Giuliani, attended the event to continue his quixotic and dangerous quest to try to overturn the results of the democratic election.

Trump had been expected to appear in person, but did not after another member of his legal team tested positive for the coronavirus. He was placed on speakerphone to address the group.

Trump is refusing to concede, even though Pennsylvania on Tuesday certified Biden as the winner in the state and as the formal transition process has begun.

State election officials and international observers have insisted that there is no evidence of widespread voter fraud. Trump’s legal team repeatedly has lost its cases in court.

President Donald Trump will not be appearing at an event in Gettysburg, Pennsylvania, with his lawyer Rudy Giuliani aimed at trying to discredit the results of the 2020 election, which Joe Biden won.

The decision comes after a member of Trump’s campaign legal team, Boris Epshteyn, announced Wednesday he had tested positive for the coronavirus.

Epshteyn attended a press conference with Giuliani in Washington last week during which Giuliani continued to lob meritless accusations of mass voter fraud despite no evidence to support his claims.

Also in attendance was Giuliani’s son, who works at the White House and announced a day later that he had tested positive.

Trump’s appearance was never confirmed or announced by the White House. But the Federal Aviation Administration had placed a flight restriction over the area, and Giuliani had teased it was a possibility in a radio interview en route to the event.

A broad coalition of top government and industry officials says the Nov. 3 election was “the most secure in American history.” Biden was declared the winner on Nov. 7.

President-elect Joe Biden plans a Thanksgiving address to the nation, and he's expected to focus on shared sacrifices during the holiday season and express confidence that Americans will get through the coronavirus pandemic together.

— US jobless claims rise to 778,000 as the coronavirus pandemic worsens

Joe Biden will receive his first classified briefing as president-elect and announce his economic team next week.

Biden had been blocked from receiving intelligence briefings and his team members had been blocked from contact with their counterparts in the Trump administration due to the General Services Administration’s refusal to ascertain that Biden won the election while Trump campaign legal challenges against the vote continued. That ascertainment came Monday, lifting those roadblocks to cooperation.

Bedingfield says the team has been in touch with FBI and Department of Justice officials about coordinating expedited background checks for Biden’s senior White House staffers and the Cabinet nominees he announced Tuesday.

President Donald Trump’s personal lawyer Rudy Giuliani is headed to Gettysburg, Pennsylvania, to continue his fight to overturn the results of the election and secure Trump a second term.

Pennsylvania has already certified its results and awarded its 20 electors to Democrat Joe Biden, who was declared the winner of the Nov. 3 election.

Giuliani is leading legal challenges to the balloting in Pennsylvania and other states as the Republican president seeks to maintain his base of supporters and keep his options open for opportunities post-presidency.

Giuliani claimed in a Wednesday interview with New York radio station AM 970 that illegal votes were cast, especially in Philadelphia, that he wants to see disqualified. But a broad coalition of top government and industry officials says the Nov. 3 election was “the most secure in American history.”

In Pennsylvania on Saturday, a conservative Republican judge shot down the Trump campaign’s biggest legal effort in the state with a scathing ruling that questioned why he was supposed to disenfranchise 7 million voters with no evidence to back its claims and an inept legal argument at best.

China on Wednesday became one of the last major governments to congratulate Biden. There was no explanation for the delay, but some commentators suggest Beijing might want to avoid straining relations with President Donald Trump, who hasn’t conceded.

A statement carried by the official Xinhua News Agency says Xi told Biden “healthy and stable” relations are “the common expectation of the international community."

The statement says: “We hope the two sides will uphold the spirit of non-conflict and non-confrontation, mutual respect and win-win cooperation, will focus on cooperation, control differences and promote healthy and stable development of Chinese-U.S. relations."