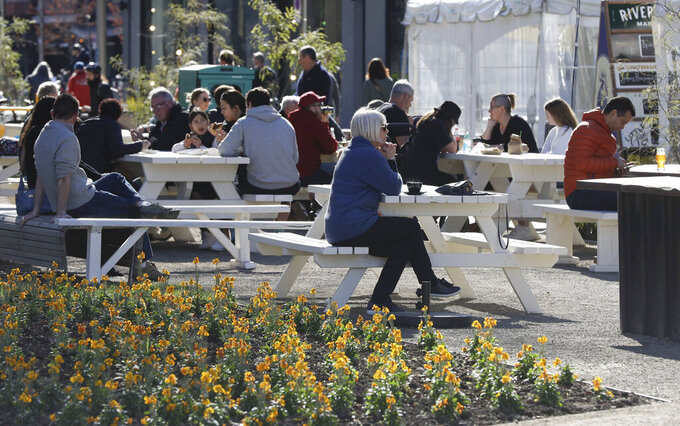 Customers enjoy lunch in the sunshine at the Riverside Market in Christchurch, New Zealand, Sunday, Aug. 9, 2020. New Zealand marked a 100 days of being free from the coronavirus in its communities Sunday, Aug. 9, with just a handful of infections continuing to be picked up at the border where people are quarantined. (AP Photo/Mark Baker)

BEIJING — New locally transmitted cases of coronavirus in China fell to just 14 over the past 24 hours, the National Health Commission reported Monday. The low figure was offset, however, by 35 cases brought into the country by Chinese travelers from overseas arriving in seven different cities and provinces across the country.

All the cases of local transmission were in the northwestern region of Xinjiang, whose main city Urumqi is the center of China’s latest outbreak. Tightened restrictions on travel, widespread testing and a lockdown on some residential communities appear to have been effective in bringing down numbers of new infections in Urumqi, while a separate outbreak in the northeastern city of Dalian seems to have run its course.

Chinese hospitals are currently treating 802 people for COVID-19, 41 of them in serious condition, while another 290 people are under observation while being isolated for showing signs of having the virus or for testing positive without displaying symptoms. China has reported a total of 4,634 fatalities from the disease among 84,668 cases.

Hong Kong reported another 72 cases and five deaths as it continues to battle a new wave of infections with tightened rules on indoor dining and obligatory mask wearing in public settings. The semi-autonomous southern Chinese city has reported 52 deaths among 4,079 total cases.

— States on hook for billions under Trump’s unemployment plan

— Masks in class? Many questions as Germans go back to school

SYDNEY — Australia has reported fewer new daily cases from its virus hotspot in the city of Melbourne than on any single day since last month. But it has also reported the nation’s highest daily death total since the virus outbreak began.

The state of Victoria reported 322 new infections and 19 new deaths on Monday, with 14 of the deaths connected to outbreaks at aged care facilities. Australian Prime Minister Scott Morrison said he was more hopeful now that cases are stabilizing in Victoria than he has been at any time over the past week.

But state premier Daniel Andrews cautioned that not too much could be read into a single day’s worth of data, and that some of the state’s most stringent lockdown measures had only come into effect at midnight Sunday. The number of new cases was the lowest recorded in Victoria since July 29. The figures did not include new infections and deaths from other Australian states, although Victoria has been accounting for the vast majority of both in recent weeks. Since the outbreak began, Australia has reported more than 21,000 infections and more than 300 deaths.

DALLAS, Ga. — A Georgia high school plans to start the week with all classes shifting online after nine students and staff tested positive for the coronavirus when the school year opened last week with most students attending in-person.

North Paulding High School made headlines soon after students returned to school Aug. 3 when photos posted on social media showed hallways crowded with students, and many of them not wearing masks. The school’s principal notified parents Saturday that six students and three staff members had tested positive for the virus, though it’s unknown if any were infected at school.

Now students will take online classes Monday and Tuesday, Paulding County Schools Superintendent Brian Ott said in a letter to parents Sunday. He said those two days will be used to clean and disinfect the school, and parents will learn Tuesday evening if in-person classes can resume later in the week.

“Hopefully we can all agree that the health and safety of our students and staff takes precedence over any other considerations at this time,” Ott said in his letter, which was obtained by Atlanta-area news outlets.

After consultations with his culture, health and finance ministers, Netanyahu’s office said Sunday that performances could take place outdoors. Audiences will be divided into 20-person “capsules,” and venues will need to be approved by the Health Ministry.

Thousands of Israeli musicians, actors and other performers have been out of work for months due to coronavirus restrictions.

Sunday’s statement said officials would work in the coming weeks to draft rules for indoor performances.

After moving rapidly to contain the virus outbreak last spring, Netanyahu apparently reopened the economy too quickly, and the country is grappling with a renewed outbreak.

LONDON — Britain has recorded more than 1,000 new coronavirus infections in a day for the first time since late June.

Britain has seen a gradual rise in coronavirus infections since it began lifting lockdown restrictions in mid-June. The government has put the next stage of reopening, which had been due to take effect Aug. 1, on hold for at least two weeks.

The number of patients hospitalized with the virus continues to decline, as does the daily number of deaths. Eight new COVID-19 fatalities were reported Sunday.

Beginning Monday and ending August 31, everyone must wear a mask in all retail places, as well as all modes of transport, other than private cars, the government has decided. People attending church must also do so, though priests are not required to wear masks in church.

Many of the latest cases have been found in young people returning from vacations abroad.

Italy’s day-to-day new caseload had previously soared far above 500 confirmed infections, but the number had dropped to 347 on Saturday, more in line with numbers of the past few weeks.

For months, the region with by far the most daily new coronavirus infections had been Lombardy, the northern region where Italy’s outbreak erupted in February. On Sunday, Lombardy had 71 new cases, barely outstripping several other regions, including Emilia-Romagna with 69, Tuscany with 61 and Veneto with 58.

While in the first weeks of the outbreak in Italy, only one of every 83 infections occurred in persons 18 years old or younger, now one of every eight confirmed cases occurs in that age bracket. With two deaths registered on Sunday, Italy’s known death toll stood at 35,205. Italy’s overall count of known infections in the pandemic stands at 250,566.

LONDON — The number of British companies planning to cut staff numbers in June was five times higher than in the same month a year earlier, in an ominous sign of COVID-19’s economic impact.

Figures obtained by the BBC show that 1,778 companies informed the government of plans to cut a total of 139,000 jobs. A year earlier the figure was 345 companies announcing a total of 24,000 job losses.

Businesses are required to inform the Insolvency Service if they plan to cut 20 or more jobs.

During the pandemic the government has been paying the salaries of almost 10 million furloughed workers. Economists are predicting a surge in unemployment when that program ends in October.

The U.K. economy shrank by more than 20% in the first half of 2020, and despite some signs of recovery the Bank of England says the economy will end 2020 9.5% smaller than it started the year.

NEW DELHI — The Indian Medical Association says 196 doctors have died of COVID-19 so far and, in an open letter to Prime Minister Narendra Modi, requested adequate care for physicians and their families.

India has been posting an average of around 50,000 new cases a day since mid-June and has the third-highest caseload in the world after the United States and Brazil. It has the fifth-most deaths but its fatality rate of about 2% is far lower than the top two hardest-hit countries.

Even as India has maintained comparatively low mortality rates, the disease has spread widely across the country.

MELBOURNE, Australia — The premier of Australia’s Victoria state says more than 2,700 active cases have no known source and remain the primary concern of health authorities.

Victoria on Sunday saw a welcome drop in its new COVID-19 cases with 394 but a record 17 deaths, including two people in their 50s. It took the hard-hit state’s toll to 210 and the Australian total of deaths to 295.

The city of Melbourne has been under tough restrictions since a week ago, including an overnight curfew and mandatory wearing of masks, but won’t see the results of their efforts for another one to two weeks.

Almost 270 Victorian residents have been fined over the past 24 hours for breaching the restrictions, including a man helping a friend to move a television 27 kilometers (17 miles) across the city.

RIO DE JANEIRO — Brazil has surpassed a grim milestone — 100,000 deaths from COVID-19. And five months after the first reported case, the country is showing no signs of crushing the disease.

The nation of 210 million people has been reporting an average of more than 1,000 daily deaths from the pandemic since late May, and 905 were recorded in the latest 24-hour period to put Brazil above 100,000. The Health Ministry also said there have been been a total of 3,012,412 confirmed infections.

The totals are second only to the United States. And experts believe both numbers are severe undercounts due to insufficient testing.

Trump accused Democrats of loading up their rescue bill with priorities unrelated to the coronavirus. “We’ve had it,” he said Saturday at a news conference at his country club in Bedminster, New Jersey.

Trump said the payroll tax cut would apply to those earning less than $100,000 a year. He said that if he is reelected in November, he would look at the possibility of making the payroll tax permanent.

Extra aid for the unemployed will total $400 a week, a cut from the $600 that just expired.

The health ministry says the country with the world’s fifth-largest caseload now has 553,188 cases and 10,210 deaths.

South Africa makes up more than half the infections on the African continent, where the total number of cases this past week surpassed 1 million. Experts say the actual number of cases is several times that amount, given the shortage of testing materials and people can have the virus without symptoms.