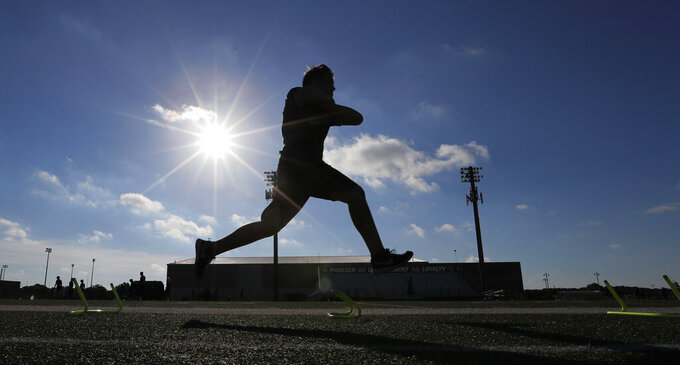 FILE - A student athlete runs a drill during a strength and conditioning camp at Arlington Martin High School Thursday, June 18, 2020, in Arlington, Texas. Texas will play high school football this fall, but some of it will be delayed, fans will be limited and masks will be required as the state fights a surge in new coronavirus cases, hospitalizations and fatalities. The University Interscholastic League on Tuesday, July 21, 2020 released its guidelines for Texas public high school fall sports, pushing back the start of the football and volleyball seasons for the largest schools by one month into late September and extending the football championships for those schools into January. (AP Photo/LM Otero, file)

The Chinese basketball league is set to allow limited numbers of spectators into games this Sunday before being fully open to fans from July 31 for playoff games in Qingdao.

The Chinese Basketball Association released a statement saying that medical professionals, teachers and police and public security officers will be eligible in the first intake of fans since the league resumed last month following a lockdown for the coronavirus pandemic.

The league says from July 31, fans older than 12 “who have missed the stadium will have the opportunity to enter the Qingdao Guoxin Sports Center Diamond Stadium to cheer for their favorite teams and players.”

Fans will have to buy tickets through an online registration system on a “one ticket, one certificate” basis within 48 hours of testing negative for COVID-19.

Physical distancing measures will be in place inside the stadium, and spectators will have to show identification, wear face masks and undergo body temperature testing before entry.

South Korea says it will allow baseball fans to return to the stands beginning Sunday as health authorities outlined a phased process to bring back spectators in professional sports amid the COVID-19 epidemic.

Senior Health Ministry official Yoon Tae-ho, during a virus briefing on Friday, also said fans will be allowed at professional soccer games starting on Aug. 1. However, professional golf tournaments will continue without galleries at least until late August, he said.

Both baseball and soccer teams will be initially allowed to sell only 10% of the seats for each game as officials plan to control the level of attendance based on the progress of anti-virus efforts.

Spectators will continue to be banned in the city of Gwangju and nearby South Jeolla Province towns, which have elevated their social distancing measures following a rise in transmissions in recent weeks.

Fans will also be screened for fevers and required to sit apart in the seats. They will be required to wear masks, banned from eating food and drinking beer, and discouraged from excessive shouting, singing and cheering during the game. Stadium officials will also register fans with smartphone QR codes so that they could be easily located when needed.

South Korea’s baseball and soccer leagues returned to action in May without fans in the stands. Seats have been covered with cheering banners, dolls or pictures of fans as teams tried to mimic a festive atmosphere.

Wisconsin athletic director Barry Alvarez says the school’s athletic department faces a potential $100 million loss of revenue in its $140 million budget due to challenges brought about by the pandemic.

Alvarez wrote that in an open letter to “fellow Badgers” that appeared on the Wisconsin athletic department’s website.

Alvarez added that “I believe we will reach a monumental crossroads in the coming days.”

His letter follows a Wisconsin State-Journal repor t that the athletic department could lose more than $100 million if there’s no football season. According to that report, Wisconsin would lose between $60 million and $70 million if the football team played a Big Ten-only schedule while all other sports continued.

A Venezuelan scout who worked for the Arizona Diamondbacks in the Dominican Republic has died of COVID-19.

The team released a statement saying Johan Maya died due to complications of the coronavirus on Thursday. He joined the Diamondbacks in 2019 after 15 years scouting for the Houston Astros.

The team’s statement said Maya “was a great person, a family guy and true baseball man who started his career as a professional player and went on to coaching before becoming a scout.”

The American Academy of Pediatrics has announced new recommendations for youth sports during the pandemic to minimize risks of COVID-19.

They include masks for young athletes in non-vigorous activities when social distancing isn’t possible, practicing in small pods that don’t switch players and not sharing equipment.

Because the virus spreads most easily with prolonged, close contact with an infected person, risks to young athletes will likely depend on the type of sport, number of players and indoor versus outdoor setting, the academy said, adding, “Risk can be decreased but not eliminated, by athletes, parents, coaches and officials following safety protocols.”

The University of North Carolina says men’s basketball coach Roy Williams and his wife, Wanda, donated more than $600,000 to fund scholarships for spring-sports seniors who are returning for another year after the coronavirus pandemic cut short the 2019-20 season.

The school said Thursday that the Williamses initially wanted to keep the May gift anonymous.

“He didn’t want those students to miss that experience and wanted to fund those scholarships for next year,” athletic director Bubba Cunningham said in a statement. “I still get chills when I think about his phone call and the impact it would have for dozens of our students.”

Williams, a Hall of Famer with three NCAA championships, is preparing for his 18th season at his alma mater.

The Buffalo Bills are giving season ticket holders the option to have their money refunded or defer any payments made toward the 2021 season.

Those who choose to defer payments will maintain an opportunity to purchase a limited number of single-game tickets for this year, should fans be allowed to attend, the team wrote in a letter to season ticket holders on Thursday.

Season ticket holders will maintain their seniority for next season no matter which option they choose. Those choosing to keep their money in the account will also get subscriptions to NFL Game Pass and the NFL Network’s RedZone channel.

The Diamond League track meet in Gateshead, England, has been canceled because of the coronavirus pandemic.

It is the fifth of the 15 meets in the series to be canceled. The event in London was also called off.

The Gateshead meet was originally scheduled for Aug. 16 and then moved to Sept. 12 before being canceled.

The first full Diamond League meet is currently set to be held on Aug. 14 in Monaco.

Exhibition meets have been organized remotely from Oslo and Zurich with athletes worldwide competing simultaneously in a few events.